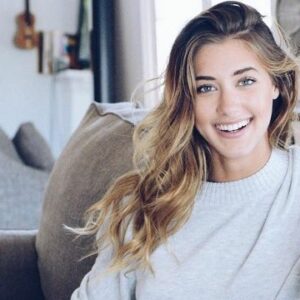 American model, actor, and social media sensation Jessica Serfaty first gained notoriety as a participant in “America’s Next Top Model” cycle 14. She’s also known as Ed Westwick’s lady love in the entertainment industry. Jessica and Ed have been dating each other for a while, and they frequently appear together. She was previously married, and she has a son. Jessica has become well-known for her work as a fashion model and in several music videos. As an actor, Jessica has appeared in films including the horror anthology “V/H/S: Viral,” the short film “Faith,” and the horror movie “Ryde.”

Jessica discovered in her adolescent years that modeling was where her genuine skill rested. She experienced a professional breakthrough in 2010 and competed in cycle 14 of the reality competition “America’s Next Top Model.” Her appearance on television ended up changing the game. She gained notoriety as a model with great potential.

In the majority of the runway challenges and photo shoots, she excelled. She left a lasting impression on the judges’ panel with her photos and runway performance. At the end of the show, Jessica was ranked fifth.

After “America’s Next Top Model,” Jessica had no intention of turning around. Offers for modeling jobs began to flood in. She soon made an appearance in Dan Balan’s “Justify Sex” music video. She had an appearance on the reality television program “Axe: Dirtcathlon” in 2011.

Jessica made her acting debut the following year in the short film “Faith.” Jessica made several appearances between 2014 and 2017 in films like “V/H/S: Viral,” “Blood Brothers,” and “FML.” She has a significant part in the 2017 horror film Ryde.

Numerous advertisements for brands including Doritos, Toyota, and McDonald’s include Jessica. When Jessica took part in a couple of modeling campaigns for “Nous Model Management,” which is ranked as one of the top agencies in Los Angeles, her career took off to new heights.

She has become well-known on social media as well. In some of his videos, she has collaborated with well-known ‘Vine’ artist Logan Paul. They appeared in the “Paradise In You” music video. Jessica can be seen posing elegantly in captivating photos on her two “Instagram” accounts, which she owns. Her main “Instagram” account currently has over 600,000 subscribers.

When she was sixteen, Jessica met Ididia Serfaty, a property manager from Arkansas, in a church. Then, Ididia was 22. They started dating soon after, and Jessica became pregnant. Roman Serfaty, the couple’s son, was born to Jessica on September 2, 2008. Ididia and Jessica wed soon after Ididia’s birth.

For the following two years, they enjoyed a lovely marriage before Jessica traveled to Los Angeles to pursue a modeling career. Jessica, who had always aspired to be a supermodel, started to thrive in her profession. To live with her, Ididia relocated to Los Angeles. However, Jessica’s work obligations quickly began disrupting their marriage.

Jessica chose to divorce her husband. Ididia pleaded with Jessica to give their marriage another opportunity since she still had hope for a reunion. The Serfaty family soon relocated to Arkansas once more.

Jessica waited six months to realize her error. She finally filed for divorce since she fervently wished to carry on with her modeling career. Jessica and Ididia split up in 2013. To keep custody of her kid, Jessica had to remain in Arkansas. She made the decision to give her spouse custody.

In the summer and around Christmas, Jessica travels frequently to see her son in Arkansas. Ididia, though, has a different tale to share. He has repeatedly claimed in public that Jessica is unaware of Roman. He has also claimed that she no longer keeps in touch with them and that her trips to Arkansas have greatly decreased. Ididia has criticized Jessica for being a horrible mother numerous times.

Jessica has been associated with numerous celebrities since her divorce. Her most well-known liaison was with Niall James Horan, a member of the band One Direction. They frequently appeared together in public. Jessica allegedly also dated Joe Jonas, an American actor, and singer. Additionally, Justin Bieber and “Viner” Logan Paul have been associated with her.

Actor Ed Westwick from “Gossip Girl” is Jessica’s current boyfriend. They were spotted walking hand in hand on the red carpet at the “BAFTA” in 2017, which gave the media an indication of their romance. When Jessica stepped up for Ed when he was accused of sexual assault, it was clear that they were a couple.

Jessica is one of the wealthiest and most well-known models. According to our research, Jessica Serfaty has a net worth of $5 million, as reported by Forbes, Wikipedia, and Business Insider.