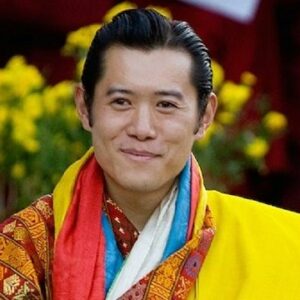 Since December 9, 2006, Jigme Khesar Namgyel Wangchuck has become the fifth and current ‘Druk Gyalpo’ or ‘Dragon King’ of Bhutan. He ascended to the king after his father, Jigme Singye Wangchuck, legally abdicated the throne in favor of his son. On November 1, 2008, the first centennial of the Bhutanese monarchy was commemorated with a public coronation ceremony. He is a proponent of democracy who works to raise standards in the civil service, education, and business sectors, and he travels extensively throughout Bhutan to meet and encourage the youth in this endeavor. He replaced the 1949 deal with a new friendship treaty with India in February 2007. He has backed a slew of new government measures aimed at strengthening the system and advancing democracy. The first elected parliament of Bhutan adopted the ‘Constitution of Bhutan’ on July 18, 2008. He is the Chancellor of Bhutan’s Royal University. The ‘Bhutan Chamber of Commerce and Industry,’ the ‘European Convention of Bhutan Societies,’ the ‘Oxford Centre for Buddhist Studies,’ the ‘Bhutan Scouts Association,’ the ‘Bhutan India Friendship Association,’ and the ‘India Bhutan Foundation’ are all patrons of His Majesty.

As the eldest son of Jigme Singye Wangchuck, Bhutan’s fourth ‘Dragon King,’ and his third wife, Queen Tshering Yangdon, His Majesty was born on February 21, 1980. Prince Jigme Dorji is his younger brother, while Princess Dechen Yangzom is his younger sister. He has four half-sisters and three half-brothers.

He went to Bhutanese schools and graduated from ‘Yangchenphug High School’ in Bhutan with a Higher Secondary diploma. After that, he went to residential institutions in Massachusetts. He began his education at the ‘Phillips Academy’ and later transferred to the ‘Cushing Academy,’ where he graduated in 1999. He also attended Massachusetts’ ‘Wheaton College.’

He subsequently traveled to the United Kingdom and earned a degree in ‘Foreign Service Programme’ from ‘Magdalen College’, ‘The University of Oxford’ (FSP).
He journeyed around the Kingdom with his father, the fourth and then King of Bhutan, as the ‘Crown Prince’ (also known as ‘Dasho Khesar’), meeting and mingling with the people of Bhutan.

Encouraged by his father, he traveled to several nations as the ‘Crown Prince’ and represented Bhutan and its people at various international events.

On behalf of Bhutan, he attended the ’27th UN General Assembly’ on May 8, 2002. In his first-ever speech at the United Nations, the ‘Crown Prince’ addressed the topic of child welfare around the world in front of world leaders.

On October 31, 2004, he was inducted as the ‘Ponlop of Trongsa’ or the ‘Trongsa Penlop’ in Trongsa Dzong. It is a Dzongkha title given to the Monarchy of Bhutan’s heir apparent. The title, which translates to “Governor of the Province of Trongsa,” demonstrates the rightful heir to the Bhutanese throne, and the induction ceremony legally confers the title of “Crown Prince.”

He attended the ‘National Defence College’ in New Delhi, India, in 2005, and later completed a year-long leadership development program at the ‘Lal Bahadur Shastri National Academy of Administration.’

He attended Thai King Bhumibol Adulyadej’s ’60th Anniversary Celebrations’ in Bangkok from June 12 to 13, 2006, which were attended by royals from around the world. The 26-year-old prince became a phenomenon, particularly among female followers, to the point where the Thai media dubbed him ‘Prince Charming.’

The Career of Jigme

In December 2005, Jigme Singye Wangchuck, Bhutan’s fourth and current King, announced his intention to resign the throne in 2008 in favor of his son Jigme Khesar Namgyel Wangchuck. The fourth King proclaimed that he would begin handing over authority to Khesar as soon as possible.

On December 9, 2006, Jigme Singye Wangchuck signed a Royal Edict declaring his abdication and handing over the monarchy of Bhutan to Jigme Khesar Namgyel Wangchuck, who became the fifth King of Bhutan.
On November 1, 2008, he was officially crowned in Punakha in a lavish coronation ceremony attended by hundreds of dignitaries from all over the world.

Following his accession to the throne, His Majesty began to preside over the parliament’s final sessions in the pursuit of democratization in Bhutan. Land reform, voting rules, and other major issues were evaluated.

He traveled the country extensively in order to communicate with Bhutanese citizens about the ‘Draft Constitution of Bhutan’ and to encourage them to participate in the country’s next democratic initiatives.

He also works to improve the public service, education, and business sectors, and he continues to travel to interact with people of all ages, particularly the younger generation, in order to motivate them to help construct a more modern country.

His Majesty signed a new friendship treaty with India in February 2007, replacing the one made in 1949.
On July 18, 2008, Bhutan’s first democratically elected parliament adopted the ‘Constitution of Bhutan’ under his reign.

The first major initiative under his Monarchy, the ‘National Cadastral Resurvey,’ was initiated in March 2009 with the goal of tackling the issue of excess land, which affects all Bhutanese household life.

The historic ‘Rehabilitation Project,’ launched in 2011 and launched by his brother Jigme Dorji in October 2014, rehabilitated people living in Bhutan’s remote and inaccessible regions to villages. They were given basic necessities and services, as well as assistance with their agricultural endeavors.

He upholds the ancient custom of ‘Kidu,’ which symbolizes the reign of the Dharma King, who performs his sacred responsibility of caring for the people. He travels across Bhutan, visiting isolated villages and communities on his quest.

Bhutanese might contact ‘Kidu’ by writing to the ‘Office of the Royal Chamberlain.’ Every district has a Dzongkhag Kidu Officer who is in charge of collecting people’s applications and making direct appeals to His Majesty. When the King meets potential appellants along the route on his road travels, he might be approached immediately.

‘Kidu’ initiatives include offering educational assistance to low-income students, medical assistance to the elderly, state land to landless farmers, and monitoring and supporting victims of natural catastrophes. His Majesty had personally observed the victims’ restoration efforts following the earthquakes and floods of 2009 and 2011.

He began the ‘DeSuung Training Programme,’ a military-style training program, in 2011 at the request of the youth in order to acquire abilities to deal with emergencies. With over a thousand trained volunteers, the initiative has grown extremely popular.

When the Wangduephodrang Dzong was destroyed by fire on June 24, 2012, the King, as ‘Supreme Commander of the Armed Forces,’ led the armed forces to the location and visited it himself within hours. He allocated Nu.100 million from the Armed Forces to the ‘Dzong Reconstruction Fund.’

He married Jetsun Pema in Punakha Dzong on October 13, 2011, and bestowed upon her the Crown of the Druk Gyaltsuen, which she received from the Dzong’s hallowed ‘Machhen Temple,’ thereby crowning her as the ‘Queen of the Kingdom of Bhutan.’
Their son, ‘His Royal Highness The Gyalsey,’ was born on February 5, 2016. 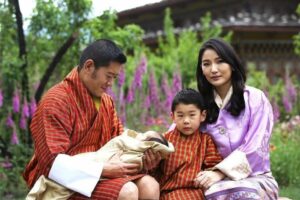