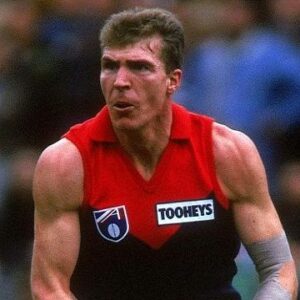 Jim Stynes is an Australian footballer who has become renowned as the country’s pride over the years. Stynes had made a significant contribution to Melbourne’s success during his 264-game career. This youngster began playing football at the age of eight and quickly established himself as a capable player. He subsequently received a scholarship to play football and further his education at Melbourne, which drastically transformed his life. When he was still a teenager, he secured a berth in the ‘Melbourne Football Club.’ Jim’s dedication to the game was demonstrated when he continued to play for Melbourne despite being wounded. Jim also received various awards for demonstrating his football prowess on numerous occasions. The ‘Brownlow Medal’ and the ‘Medal of the Order of Australia’ are two examples of them. Apart from his athletic commitments, Jim also became involved in philanthropy later in his career, co-founding the ‘The Reach Foundation.’ He eventually explored his writing ability by publishing two books on his life as well as a children’s book.

Stynes was born on April 23, 1966, in Dublin, Ireland, to Teresa and Brian. He grew up in Ireland’s Rathfarnham district, where he attended the ‘Ballyroan Boys School.’ He then transferred to ‘De La Stelle College Churchtown’ to pursue his studies.

At the tender age of eight, he tried his hand at football for the first time. Later that year, he went on to play for the ‘Ballyboden St. Enda’s Gaelic Athletic Association’ at the under-11 level.

He was also influenced by the 1980 film ‘The Club,’ which was based on football. Watching this film provided him with much-needed exposure to how the game is played professionally.

Jim had the opportunity to play in the ‘All-Ireland Minor Football Championship’ for his city of Dublin in 1984. In this competition, his squad even came out on top.
When Stynes saw an advertisement for the ‘Melbourne Football Club,’ his life transformed. Fortunately for him, he took advantage of the opportunity and arrived in Australia in 1984.

Later in life, he began studying for a Bachelor of Social Science degree at the prestigious ‘RMIT University.’ He was accepted to ‘Deakin University after graduation, where he acquired a ‘Bachelor of Education degree.

Jim’s career took off when he played for the ‘Melbourne Football Club’ against the ‘Geelong Football Club’ in 1987. He was, however, chastised for performing poorly in all of these games.

With his outstanding performance in the ‘1988 VFL Grand Final,’ this player silenced his detractors. Despite his team’s poor performance, the latter was named ‘Best Player of the Match.’
In a match against ‘North Melbourne Football Club’ in 1993, Stynes suffered a serious injury. He persuaded his coach to let him continue playing, and he even performed despite the injuries.

Despite not being physically fit, he continued to play the following year.
Between 1995 and 1998, this Australian footballer was at the pinnacle of his career.

After succeeding Paul Gardener as chairman of the ‘Melbourne Football Club,’ he was named chairman in 2008.
Jim left in 2012 after four years in this position due to family and other personal obligations.

In 2000, Jim was awarded the ‘Australian Sports Medal’ for his contributions to football. Around the same time, he was named to the ‘Team of the Century’, declared by the ‘Melbourne Football Club.’
The ‘Australian Catholic University awarded Stynes the title of ‘Doctor of the University.’

In 1991, this footballer was awarded the ‘Brownlow Medal’ for being one of the year’s most consistent players. He was also honored with the ‘AFL Players Association MVP Award,’ which he got at the same time.
Jim was inducted into the ‘Australian Football Hall of Fame’ in 2003 for his football achievements.

In 2007, Stynes was awarded the ‘Medal of the Order of Australia for mentoring young athletes and making significant contributions to the sport.

Jim married Samantha, with whom he has two children, Tiernan and Matisse.
This footballer had two brothers, Brian and David, who both followed in Jim’s footsteps and played professional football.

Jim started the non-profit organization ‘The Reach Foundation’ in 1994 with a movie director named Paul Currie, even when he was busy playing football. The initiative aims to foster young people’s hidden talents and abilities in order for them to have a better life.

During his lifetime, Jim also wrote several books. The autobiographical work ‘Whatever it Takes,’ published in 1996, was the first of these.

While acting as the chairman of the ‘Melbourne Football Club,’ Jim succumbed to cancer. Jim died of the condition in his home in 2012. He was 45 years old at the time of his death. A state funeral was held to pay final respects to this footballer.

Jim Stynes is one of the wealthiest Australian Rules Footballers, as well as one of the most popular. Jim Stynes’ net worth is estimated to be $1.5 million, according to Wikipedia, Forbes, and Business Insider.