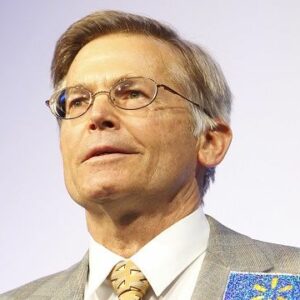 Jim Walton is an American businessman and the heir to ‘Walmart,’ the world’s largest retailer. He was born in Newport, Arkansas, and reared in Bentonville, Arkansas, as the third child of Sam Walton, the co-founder of ‘Walmart.’ He was an all-state football player in high school and also received his pilot’s license. He graduated from the ‘University of Arkansas’ with a bachelor’s degree in business administration and went on to work for Walmart, where he oversaw the company’s real-estate transactions until 1975. Following that, he took over as president of ‘Walton Enterprises.’ Jim joined the Board of Directors of ‘Walmart’ in September 2005, following the death of his older brother, John. He was also the CEO of the ‘Arvest Bank,’ which he and his family hold. He is currently one of the world’s wealthiest people.

On June 7, 1948, in Newport, Arkansas, Jim Walton was born James Carr Walton to Sam and Helen Walton. He was born into one of the country’s wealthiest business families. When Jim was 14 years old, his father, Sam, co-founded the world’s largest retailer corporation, ‘Walmart,’ with his brother, Bud Walton.
He was the family’s third child, with three additional siblings named Rob, John, and Alice Walton. In Bentonville, Arkansas, he attended local schools.
He excelled in sports and athletics in addition to studies. He was a standout football player for his high school squad, earning all-state honors (Bentonville High School). He was also the class president of his junior year.
Despite his exceptional football skills, he knew from the start that he wanted to join the family business. He acquired a bachelor’s degree in Business Administration from the ‘University of Arkansas’ to prepare for this. Jim chose to stay in the area while his other siblings went to school in other places. He was also a member of the ‘Lambda Chi Alpha fraternity’ throughout his academic years.
Jim took a year off after graduating from college in 1971 and wanted to travel the world. He went on a trip and learnt how to fly a plane. He returned to Arkansans and joined the family business after that.

In 1972, he returned to the United States and began working for ‘Walmart,’ initially in the real estate division. He indicated interest in joining ‘Walton Enterprises,’ a corporation controlled by his father, Sam Walton, after working for the following four years. He became president of ‘Walton Enterprises’ in the mid-1970s.
After a few months working for ‘Walton Enterprises,’ Jim became interested in banking because his father owned ‘Arvest Bank,’ which grew to become the state’s largest and oldest bank. He was the bank’s CEO until he was appointed chairman.
Despite the fact that ‘Arvest’ never made it to the big leagues of national banking, it did quite well on the net interest margin scale, given its small core area of activities.
The bank’s three brothers – Jim, John, and Rob – each own 25.88 percent of the company, with the remainder held by its employees.
The bank has grown at an exponential rate under Jim’s leadership. WestStar Bank, Caney Valley National Bank, and the Bank of Pea Ridge are just a few of the local banks it has bought.
‘Arvest’ declined cash from the ‘Troubled Asset Relief Program’ during the late-2010s economic downturn. Later that month, in March 2013, ‘Arvest’ purchased 29 ‘Bank of America’ branches in Kansas, Arkansas, Missouri, and Oklahoma.
In states like Arkansas, Oklahoma, and Missouri, the bank has over 200 locations. The bank also owns a number of mortgage and insurance companies. Jim has been employing the same business plan his father, Sam, used to expand ‘Walmart’ in order to continue the high pace of growth in the bank operations.
Sam also purchased the ‘Benton County Daily Record,’ which later became ‘Community Publishers Inc.,’ which is now held by the ‘Walton’ family. Sam had purchased it with the intention of using it for marketing and printing flyers and brochures. It became into a significant part of the family business over time, as it shielded the ‘Waltons’ from unwanted publicity.
For many years, Jim avoided going to ‘Walmart’ until his older brother, John, passed away in 2005. He was a member of the ‘Walmart’ ‘Board of Directors,’ and Jim took over his position. He also contributes to the ‘Walton Family Foundation’ on a monthly basis.
According to a 2016 study, Jim possessed 152 million Walmart shares worth $11 billion. In March 2018, his net worth was estimated to be approximately $41.9 billion, making him one of the world’s wealthiest people.

Lynne McNabb Walton is Jim Walton’s wife, and the couple has four children together. Jim currently resides in Bentonville, Arkansas, with his family.
Jim is a quiet person who dislikes being in the spotlight.
He is not directly involved in politics, but he has been identified as a supporter of white supremacist politicians like Jason Rapert.

Jim Walton has a net worth of $60 billion.