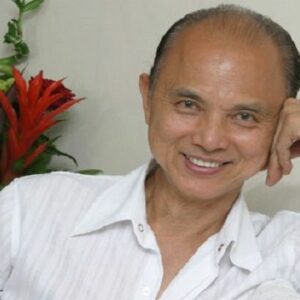 Jimmy Choo is a Malaysian-born fashion designer who rose to prominence early in his career thanks to his handcrafted shoe creations. Choo, who was born into a family of shoemakers, began his career in fashion design at a young age and continued to work with shoes throughout his schooling and formative years. He began designing, handcrafting, and selling his own shoes shortly after graduating from a London technical college, receiving international attention for his unusual and intricate work. During his early career, he had many celebrity customers, notably the gorgeous Princess Diana of Wales, who helped him turn his burgeoning reputation into worldwide fame. After the success of his handcrafted shoes earned him a household name in the fashion business, he collaborated with an editor from the British ‘Vogue’ magazine to cofound his own firm, ‘Jimmy Choo Ltd,’ which quickly became a significant global fashion label. He sold his controlling ownership in the company, but he remains involved in the haute couture design work, putting the popular ready-to-wear and accessory lines in the hands of his business partner Tamara Mellon of ‘Vogue.’ Choo’s name is still associated with high fashion and self-made wealth, particularly in his home Malaysia.

Jimmy Choo Yeang Keat was born in Penang, Malaysia, to a family of shoemakers. He built his first shoe at the age of 11 in 1959, with the help of his father.

Choo was born and raised in Malaysia, where he attended primary school. He then went to university in the United Kingdom, graduating in 1983 from Hackney’s ‘Cordwainers Technical College,’ which is now part of the ‘London College of Fashion.’ Several part-time jobs, including a position as a cleaner at a shoe factory, helped him pay his costs while he was in school.

Following his graduation, Choo started his first shop in Hackney in 1986, operating out of an old hospital building he rented. Customers took notice of his unique design approach and exceptional handcrafted craftsmanship, and he became an almost instant success.

His early work for high-end clients was almost completely on commission, and he spent a great deal of time perfecting client-specific details to meet particular design sensibilities and color palettes.
Choo’s unique design flair and dedication paid off when he was featured in an eight-page spread in Vogue magazine in 1988. Two years later, cultural icon Diana the ‘Princess of Wales’ became a regular customer, boosting his notoriety even further.

Despite his enormous success, Choo nevertheless ran a modest and personal business in 1996, producing just around 20 hand-made pairs of shoes every week. When he co-founded ‘Jimmy Choo Ltd’ with Tamara Mellon, the accessories editor for British Vogue,’ his designs became an international brand.

Choo focused almost solely on the exclusive ‘Jimmy Choo Couture line created under that name after selling his 50% stake in ‘Jimmy Choo Ltd for £10 million in 2001, even though the company remains under Mellon’s ownership. Mellon is also in charge of the Jimmy Choo Ready-To-Wear collection, which has lately grown to include handbags

and other accessories. Choo no longer works for the corporation in an official or design position and instead concentrates on his personal projects.

Choo was a co-founder of ‘Jimmy Choo Ltd,’ which produces couture and ready-to-wear design to this day. Choo continues to design the couture line for ‘Jimmy Choo Ltd’ after relinquishing his majority ownership in the company.

In 2000, the Sultan of his native Malaysia presented him with a state award. This honor gave him the title of ‘Dato’ and recognized his accomplishments.

He has been recognized as the ‘World’s Outstanding Malaysian Designer’ in the 2001 ‘Design for Asia Accolades,’ among other awards recognizing his role as a significant Malaysian designer.

In 2002, he was awarded the ‘Order of British Empire’ for his contributions to the UK fashion sector. Many members of the royal family have worn his shoes.

Choo now lives in London, but he remains active in Malaysia, where he is rumored to be planning to open a shoemaking institute. He has one daughter and a son who is the owner of ‘Mirai Inc.’ and a Japanese television celebrity.

Jimmy Choo is one of Malaysia’s most well-known and successful businesspeople, as well as one of the world’s most renowned fashion designers. His estimated net worth is $50 million.

Jimmy Choo is a $50 million dollars net worth Malaysian shoe and apparel designer. Jimmy Choo is based in the United Kingdom, where his company, Jimmy Choo Ltd, is known for its high-end women’s shoes, which are also handmade.

This fashion designer’s world-famous company is named after a typo made when he was born. His original surname is Chow, but due to a clerical error on his birth certificate, it became Choo.