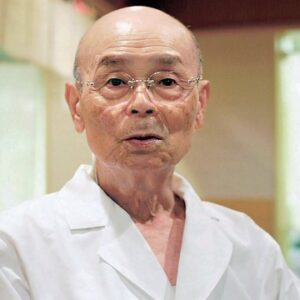 Jiro Ono is a Japanese chef regarded as the greatest sushi artist alive by food artisans, contemporaries, and reviewers. Sukiyabashi Jiro, a three-Michelin-starred, worldwide known Japanese sushi restaurant in Tokyo, is his business. Even at the age of 91, his commitment to preparing the best sushi remains unwavering. Ono began working in a restaurant when he was seven years old, and he continues to improve his trade by leaving no stone untouched. Ono maintains his daily pattern after seven decades of professional cooking, rising early in the morning and doing the same thing he did yesterday and the day before. He elevated the reputation of his modestly situated restaurant to one of international renown and acclaim. Sukiyabashi Jiro is credited with serving the best sushi lunch on the planet, with much of the acclaim going to Jiro Ono, who has worked tirelessly to perfect his craft. He is known for pioneering current sushi preparation techniques. Ono keeps track of everything, from the texture and flavor of the raw components utilized to the temperature at which the sushi rice is served. He is unquestionably a global sushi shokunin icon!

Jiro Ono was born in Tenryu (modern-day Hamamatsu), Shizuoka Prefecture, Japan, on October 27, 1925.
He began working at a local restaurant when he was seven years old. He moved to Tokyo to study as an apprentice two years later.

The Career of Jiro Ono

Jiro Ono earned his certification as a sushi chef in 1951. Since then, he’s been making sushi. In 1965, Ono started his own restaurant, Sukiyabashi Jiro, in Ginza, Tokyo, after years of apprenticeship and working for experienced restaurateurs.

Sukiyabashi Jiro has a global reputation for offering the most precious sushi dinner a human being can expect to appreciate, despite its location in an underground corridor near a Tokyo subway station. It accommodates a maximum of ten people at a time, and reservations must be made at least three months in advance.

There is no menu at Ono’s Sukiyabashi Jiro since the items are chosen by Ono himself. The restaurant’s typical supper, which includes around 20 courses, ranges from $300 to $400 per person.

American film director David Gelb and renowned culinary critic Masuhiro Yamamoto dined at Ono’s restaurant in the late 2000s. After lunch, Gelb changed his mind about making a sushi documentary by compiling the work of several sushi chefs and their various styles.

Because the dish he was served had such a profound effect on him, he decided that the documentary would focus solely on Ono.

‘Jiro Dreams of Sushi,’ directed by Gelb and released in 2011, was about Ono’s ongoing effort to improve the art of sushi preparation. It premiered at the Provincetown International Film Festival in the United States, and it was an official selection at the Tribeca Film Festival the following year.

The movie was well-received, grossing over $2.5 million in North America alone. On Box Office Mojo, the film is placed 70th out of all US Documentaries.

Jiro Ono’s claim to fame is his sushi-making skills. Ono’s signature flair and authentic sushi cuisine have taken the world by storm, earning him the title of greatest sushi chef in the world. His commitment is unwavering, as evidenced by the dishes he prepares.

His main restaurant, despite its worldwide recognition, is a tiny establishment that has gained three Michelin stars and is regarded as the best sushi restaurant in the world.

Three Michelin stars have been awarded to Jiro Ono’s flagship restaurant. Despite the fact that Ono’s restaurant has received the highest Michelin rating (Michelin does not award four stars), his devotion to his art is doctrinaire.

Even at the age of 91, Jiro Ono continues to improve his sushi every day.

Jiro Ono’s personal life is largely unknown, except for the knowledge that he has two sons, Yoshikazu Ono and Takashi Ono, both of whom are sushi chefs.

Yoshikazu, his oldest son, works under Ono at their flagship restaurant and is expected to succeed his father at Sukiyabashi Jiro.

Jiro Ono is a Japanese chef and restaurateur with a $9 million net worth.