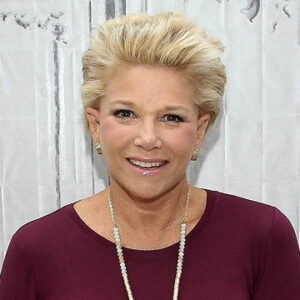 American journalist and television broadcaster Joan Lunden was given the name Joan Elise Blunden when she was born. She worked as a special correspondent for the news and chat show “Today” on NBC as of 2014. She previously worked for the ABC network as the co-host of “Good Morning America.” She is also well known for hosting the lifetime series “Health Corner,” the A&E cable network shows “Biography” and “Behind Closed Doors,” as well as other programs. She is also a published author, having written various books such as “Joan Lunden’s Healthy Living,” “Mother’s Minutes,” “Your Newborn Baby,” and “Joan Lunden’s Healthy Cooking.” The National Women’s Political Caucus Award, the Spirit of Achievement Award from Albert Einstein College of Medicine, the New Jersey Division of Civil Rights Award, the YWCA Outstanding Woman’s Award, the Matrix Award from The New York Association for Women in Communications, and the Baylor University Outstanding Woman of the Year Award are just a few of the accolades Lunden has received to date. She was also awarded “Mother of the Year” status by the National Mother’s Day Committee for her commitment to parenthood. In 2016, the American journalist received the WWE’s second Warrior Award.

KCRA-TV was where Joan Lunden began her career as a journalist. Later, in 1975, she began working for the “Eyewitness News” program on New York’s WABC-TV. She also started co-anchoring the weekend newscasts. Following this, she worked as a feature news correspondent for GMA before filling in as a co-host for ABC’s Winter Olympics coverage.

Lunden hosted Charlie Gibson of ABC for a significant portion of her journalistic career. She had the chance to interview numerous American presidents and first ladies between the 1970s and 1990s thanks to her popularity on the GMA program, including Gerald and Betty Ford, Ronald and Nancy Reagan, Jimmy and Rosalynn Carter, Bill and Hillary Clinton, and George and Barbara Bush, to name a few.

Lunden served as the host of the A&E cable network program “Behind Closed Doors.” Additionally, she frequently served as a guest host on the network’s “Biography” program. In addition to this, she hosted the DirectTV programs “Hometown Heroes” and “America’s Invisible Children.” She currently serves as host of the Lifetime program “Health Corner.”

Gladyce Lorraine and Dr. Erle Murray Blunden welcomed Joan Lunden into the world on September 19, 1950, as Joan Elise Blunden in Fair Oaks, California, in the United States. She graduated from California State University, Sacramento, with a degree in liberal arts. After that, she attended the Universidad de Las Americas to study Spanish and anthropology.

The American journalist married TV/radio personality Michael A. Krauss from 1978 to 1992, when we’re talking about her romantic life. Prior to divorce, the couple had three daughters: Sarah Emily Krauss, Lindsay Leigh Krauss, and Jamie Beryl Krauss. Later, in 2000, Lunden wed Jeff Konigsberg. The family has four children. The journalist revealed that she had been given a breast cancer diagnosis on June 24, 2014. After having the malignant masses surgically removed, she had chemotherapy and radiation treatment to thoroughly eradicate any leftover cancer cells. She is healthy and cancer-free as of 2018.