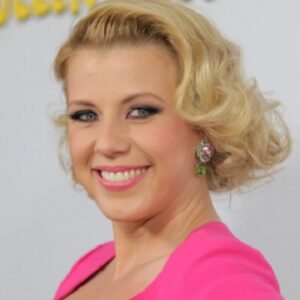 Jodie Sweetin is an actress, television personality, singer, and dancer from the United States who began her career as a child performer. She began her career in advertisements before landing her first TV role at the age of five in the popular sitcom ‘Valerie.’ Following that, she was cast as Stephanie Tanner in another hit sitcom, ‘Full House,’ which gave Jodie, who continued to appear on the program until its end, a solid basis and much-deserved renown as a child artist. Her admirers continue to ask her to perform her much-loved catchphrase “How rude!” in the show. Her popularity on the sitcom led to her resuming the character in the show’s sequel, ‘Fuller House,’ which she currently appears in. She’s also appeared in shows like ‘The All-New Mickey Mouse Club’ and ‘Can’t Get Arrested,’ as well as films like ‘Singled Out’ and ‘Defending Santa,’ as well as reality shows like ‘Pants-Off Dance-Off’ and ‘Dancing with the Stars.’ ‘Port City,’ ‘Redefining Love,’ and ‘Small Bits of Happiness,’ among others, have all included her.

Jodie Sweetin was born in Los Angeles, California, on January 19, 1982, while her biological parents were in prison. Her uncle, Sam, a handyman, and his second wife, Janice, raised her as their only kid.
Despite the fact that Sam and Janice adopted her when she was nine months old, they were only able to legally adopt her when she was around two years old since Jodie’s biological father was a 14th Native American.
Janice was inspired by family friends to pursue Jodie’s gift further, prompting the former to approach a talent agent.
At the age of four, Jodie began her career with a hot dog commercial. The producers of a Sizzler commercial in which she appeared as a child gave her a Lhasa Apso named Lacey.

She made her television debut in 1987, at the age of five, in the American sitcom ‘Valerie.’ Pamela was featured in the 11th episode of Season 2 titled ‘Boston Tea Party,’ which aired on January 4 of that year.
She grabbed the notice of producers Thomas Miller and Robert Boyett, who were about to start work on the sitcom “Full House” at the time. Following that, the show’s creator, Jeff Franklin, put her in one of the series’ principal parts, Stephanie Tanner, which turned out to be Jodie’s most memorable portrayal to date.
Stephanie played Danny Tanner’s educated, curious, and sardonic middle kid. She played the character from the show’s inception on September 22, 1987, until its conclusion on May 23, 1995, and was the only performer to appear in every episode.

In 1996, she played Lydia Lump in an episode of the American sitcom ‘Brotherly Love’ titled ‘Downtown Girl.’
During her high school years, she performed in musical theatre alongside actor Matthew Morrison. She graduated from Los Alamitos High School in Los Alamitos, California, in 1999.
She played Rhiannon Marcus in two episodes of the American television teen drama series ‘Party of Five’ in 1999, titled ‘Bye, Bye, Love’ and ‘Fate, Hope, and Charity.’

Jodie enrolled in ‘Chapman University’ in Orange, California after finishing high school, and despite having an academic scholarship, she rarely attended courses. She partied hard during those times, which had a negative impact on her schoolwork, resulting in a.9 GPA and the suspension of her scholarship. She finally graduated with a bachelor’s degree in Liberal Arts from the institution.

In 2003, she played Maryanne in the episode ‘Sorority Girl’ of the American sitcom ‘Yes, Dear.’
In 2006, she voiced a character in the American direct-to-video satire ‘Farce of the Penguins,’ directed by Bob Saget and released on January 30, 2007.

In 2007, she continued to host the Fuse TV dancing competition show ‘Pants-Off Dance-Off’ for its second season.
Margaret Williams was her character in the 2008 short comedy film ‘Small Bits of Happiness.’ At the 3rd Annual Independent Television Festival in Los Angeles, the film won the Best Comedy award.
She appeared in two films in 2009: ‘Redefining Love,’ a romantic comedy released on February 14th, and ‘Port City,’ a comedy released on October 11th.

She appeared in five episodes of the internet show ‘Can’t Get Arrested’ in 2011 as Jodie, one of the main protagonists.
‘Singled Out’ (2012), in which she played Leia, and ‘Defending Santa’ (2013), in which she played Beth, are two of her TV films.
She played Charlotte Disney in the independent biographical drama film ‘Walt Before Mickey,’ which was released on August 14, 2015.
Her ‘Full House’ reputation inspired her to reprise her role as Stephanie Tanner in the series’ spin-off, ‘Fuller House.’ The Netflix original family sitcom series sequel premiered on February 26, 2016, and has already aired two seasons with a total of 26 episodes.

As the show’s precursor, Jodie has appeared in every episode of ‘Fuller House.’ The third season of the show is set to premiere on March 18, 2017, and production has already begun.
In 2016, she competed in the 22nd season of the American dancing competition TV show “Dancing with the Stars.” Her dance partner was Keo Motsepe, and the two were eliminated in the sixth week of the season. She also appeared in an episode of the American TV show ‘Hollywood Medium with Tyler Henry’ that year.

Jodie began abusing alcohol and drugs at a young age, beginning with alcohol abuse at the age of 14, shortly after the finale of ‘Full House.’ Jodie consumed drugs like crack, ecstasy, and methamphetamine for the next 15 years.
In July 2002, she married Shaun Holguin, a Los Angeles police officer. Her drug addiction, which required her to be hospitalized and then go through a rehab program, began to have an impact on her marriage, which ended in divorce in 2006.

Jodie Sweetin is an actress from the United States with a net worth of $2 million. Sweetin is best known for playing Stephanie Tanner on Full House and its spin-off, Fuller House. Jodie has also landed roles in a number of other television shows and independent films in addition to these. She’s also the host of her own podcast and has starred in numerous ads.