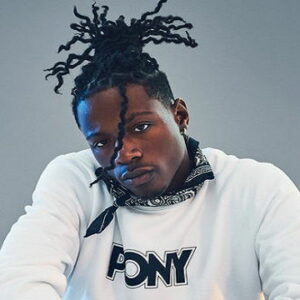 Jo-Vaughn Virginie Scott, an American rapper, hip-hop record artist, and actor, goes by the stage name Joey Badass. He is one of Pro Era’s original members, a hip-hop group. Joey is praised for blurring the distinction between modern rap and old-school hip-hop. By releasing his mixtape, “in 1999,” he established himself in the hip-hop scene. He has released 19 singles overall, three mixtapes, and an extended play (EP) so far. His works include “Summer Knights,” “All-Amerikkkan Bada$$,” “1999,” and “Rejex.” Joey has a distinct, raw, and eccentric style. He enjoys experimenting with his lyrics, which aids in the creation of original music. Joey had always wanted to be an actor, and he succeeded in his goal when he was cast in a key role in the television series “Mr. Robot.”

On January 20, 1995, in the Brooklyn neighborhood of East Flatbush, Jo-Vaughn Virginie Scott was born. While his father is a native of Jamaica, his mother is from the Caribbean island of St. Lucia. As the first member of his family to be born in the country, Joey made history.

Joey began composing poems and songs at the age of eleven after developing an early interest in literature and the English language. He enrolled at Edward R. Murrow High Institution since the school had a reputation for supporting aspiring actors and he had always aspired to be an actor. To gain attention as an actor, he participated in numerous school productions. Joey also performed in a significant role in the school play “John Cusack is Not a Famous Actor.”

By the time he was 15 years old, he was certain that acting would be his career. However, fate had other ideas for him. He was captivated by the talent of the rappers he witnessed performing in his school, so he approached them and asked if he could join them.

He quickly discovered himself mingling with a group of rappers. His attention moved from acting to music as a result. He never forgot about acting, though, and simply believed that music may help him break into the industry.
One of their group members, Capital Steez, came up with the concept of starting a rap collective. Together, they created the rap collective “Pro Era,” which is short for “Professional Era.” Along with another rapper named Powers Pleasant, Joey joined in on the collective’s founding.

He began rapping under the alias JayOhVee but eventually switched to his current moniker. Pro Era soon produced a video showcasing the group’s rap prowess and uploaded it to YouTube. The video quickly spread over the internet, and Jonny Shipes, the creator of Cinematic Music Group, eventually became aware of it.

Then, Jonny went up to Joey and requested him to write raps and songs for him to release on his record company. Joey accepted his offer, but he insisted that he sign all the other “Pro Era” members as well. It was accepted by Jonny, and the rest is history.

Joey also began listening to a lot of current rap artists, using some of their styles for his songs. Joey’s manager right now is Jonny Shipes.

In 2012, Joey and Capital Steez, the company’s founder, teamed for the first time on a song video called “Survival Tactics,” which was posted on their official YouTube channel. The tape was created by Cinematic Music Group, produced at Relentless Records, and released through RED Distribution. The first studio album by the hip-hop group “Styles of Beyond,” “2000 Fold,” served as some of the inspiration for the song “Survival Tactics.”

By releasing the mixtape “1999” in July 2012, Joey made his debut as an independent artist. The tape quickly gained popularity and was included in Complex magazine’s list of the “top 40 albums of the year.”

The remaining album tracks were incorporated in a new mixtape that Joey released. It was launched on September 6, 2012, under the name “Rejex.” He experimented with his music and combined several musical genres, which contributed to his quick fame. Even though it was a risky move, it ended up being a recipe for great music.

When Joey released his second mixtape, “Summer Knights,” in 2013, his career reached new heights. The tape’s first single, “Unorthodox,” had already become popular when it was released earlier that year.

‘Summer Knights’ was initially going to be a mixtape, but for some reason, it was published as an extended play instead. The EP version was indeed released by Joey on October 29, 2013. The EP was listed at number 48 on US Billboard’s “Top R&B/Hip-Hop Albums chart.” Joey received his first BET Awards nomination in 2013 for “Best New Artist.”

In 2014, Joey’s desire to become an actor came true when he was chosen to play a role in the short film “No Regrets.” His real life was only loosely based on the plot of the movie. He debuted the lead single from his upcoming album, “Big Dusty,” in August.

On August 12, 2014, the full-length studio album was made available. He performed live at the start of 2015 on the renowned talk show “The Tonight Show Starring Jimmy Fallon.” The Roots, Statik Selektah, and BJ The Chicago Kid, among others, performed on stage with him afterward.

On January 20, 2017, he turned 20 and also released his subsequent album, “B4.DA.$$.” The phrase “Before the Money” is represented in the album’s title. Joey made his television debut on the suspenseful show “Mr. Robot.” He took on the part of Leon, the main character’s best buddy.

Because of this series, Joey was forced to decline the opportunity to portray Barack Obama in a biography. On March 4, 2016, Joey released the first song from his new album, “All-Amerikkkan Bada$$,” titled “Devastated.”

The song was given the 25th spot on the list of the “Bubbling Under Hot 100 Singles.” The RIAA granted the single a gold copy certification due to its record-breaking sales.

The album’s second single, “Land of the Free,” was released on January 20. Ultimately, the album was released on April 7.
A month later, Joey’s management team revealed the ‘Everybody’s Tour’ concert tour. He was joined on his tour by rappers and hip-hop acts like Logic and Big Lenbo.

The creator of “Pro Era,” Capital Steez, died by suicide on December 24, 2012. The results of the investigation pointed to a murderous incident. Additionally, the study made the case that Joey might have committed the murder.
The incident with Joey breaking a security guard’s nose at the Falls Festival in Byron Bay, Australia, sparked yet another controversy. 2015 was the year of the incident.

Joey earned an award at the 2016 BMI R&B/Hip-Hop Awards in the category of “Social Star.”