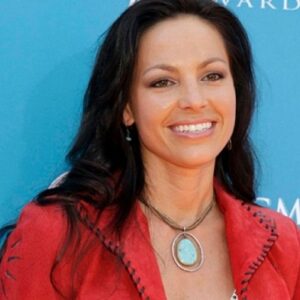 Joey Feek was a country and bluegrass singer from the United States who was one half of the husband and wife musical duet Joey + Rory. Rory performed background vocals and played guitar for the pair, while she was the lead vocalist. The couple first gained notoriety after finishing third in CMT’s “Can You Duet” competition in 2008. Following the competition, they signed with Sugar Hill/Vanguard Records and published their debut album, which included the hit single “Cheater, Cheater.” She was born in Alexandria, Indiana, to music-loving parents and got her vocal talent from her mother, a gospel singer. She began singing at a young age and gave her first performance at a first-grade talent contest when she was six years old, with her father strumming his guitar beside her. She was up in a small agricultural village and adores traditional country music, idolizing singer Dolly Parton as a child. She began a career as a country singer and met and fell in love with fellow artist Rory. Joey + Rory was formed when the couple married and began performing as a duo. She owned and maintained a country cafe with her sister-in-law in addition to her singing profession.

Joey Feek was one of five children born to Jack and June Feek on September 7, 1975 in Alexandria, Indiana, a small farming and industry town. Her father plays the guitar, and her mother was a gospel singer, so both of her parents are musically oriented.

Joey grew up in a small farming village surrounded by horses, barns, and cattle, and developed a passion for country music. She has always loved to sing and gave her first performance at a talent event in first grade, singing “Coat of Many Colors” with her father on guitar.
Loretta, Patty, and Dolly Parton were her idols, and she longed to be a professional singer like them.

She went to work as an assistant for a horse veterinarian after graduating from high school. She worked there for the following three years while also pursuing her passion of singing in a band and solo throughout Madison County.

Joey relocated to Nashville in the late 1990s in order to improve her prospects of establishing a successful singing career. She went to a little rustic cabin in Lewisburg, Tennessee, about an hour south of Nashville, in August 1998 to work for another horse veterinarian.

She continued to pursue singing chances in addition to her employment, and in 2000 she was able to negotiate a contract with Sony Records. She went on to record an album, but it was never published due to industry issues. She made another album, ‘Strong Enough to Cry,’ in 2004, after being disappointed but still hopeful. However, this record was also shelved.

Since 2002, she has been married to fellow country singer Rory, and the two auditioned for CMT’s ‘Can You Duet’ competition in 2008. They aced the audition and went on to become one of the show’s most popular couples. They eventually finished third in the competition.

The event gave the couple, now known as Joey + Rory, much-needed exposure in the music industry, and they signed with Sugar Hill/Vanguard Records shortly after. ‘The Life of a Song,’ their debut album, was released in October 2008. ‘Cheater, Cheater,’ the album’s debut track, was a Top 40 smash on the Billboard country charts.

They released their second album, Album Number Two, in 2010, which included the singles ‘This Song’s for You’ and ‘That’s Important to Me,’ the latter of which reached No. 58 on the Hot Country Songs list.

In October 2011, Joey + Rory published their debut Christmas CD, ‘A Farmhouse Christmas.’ There are 12 songs on the album, including ‘Away in a Manger’ and ‘Blue Christmas,’ as well as a cover of Merle Haggard’s ‘If We Make It Through December,’ which has Haggard’s background vocals.

‘His and Hers,’ the duo’s third studio album, was released in July 2012. The album’s lead singles, ‘When I’m Gone’ and ‘Josephine,’ were issued to radio simultaneously before the album. The album debuted at No. 24 on Billboard’s Top Country Albums chart and No. 19 on Billboard’s Independent Albums chart in the United States.

Their album ‘Made to Last’ was released in 2013, and it debuted at No. 44 on the Top Country Albums chart. In 2014, the album ‘Country Classics: A Tapestry of Our Musical Heritage’ was released.

The single ‘Cheater, Cheater’ from Joey + Rory’s debut album, ‘The Life of a Song,’ scored a Top 40 smash on the Hot Country Songs charts. The album opened at No. 10 on the Billboard 200 and No. 61 on the Top Country Albums chart, selling about 8,000 copies in its first week.

Joey met and fell in love with fellow singer Rory at the Bluebird Cafe in Nashville in 2002. The pair married soon after. In 2014, they became parents to a girl after several years of marriage.

In June of 2014, Joey was diagnosed with cervical cancer. Although she received rigorous treatment to cure the cancer, it reappeared and spread to her intestines. In November 2015, she began receiving end-of-life hospice palliative care at her home.
At the age of 40, she died of cervical cancer on March 4, 2016.

Joey Feek was a singer and composer from the United States who had a net worth of $3 million at the time of her death.