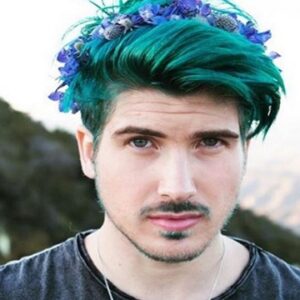 Joey Graceffa, also known as Joseph Michael Graceffa, is a popular YouTuber from the United States who also writes, acts, sings, and produces. This 25-year-old is well-known for having two YouTube accounts with his name on them. Both channels have gaming content, with one channel being utilized for vlogging. Nearly every day, Graceffa updates his channels, and he even collaborates on vlogs with other well-known YouTubers. This online sensation is hugely popular not just on its own channel but also on other social media networks. He has 3.54 million followers on Twitter as of March 2017. Along with managing his own YouTube channel, Joey Graceffa collaborates with Lia Marie Johnson and JennXPenn to create ‘AwesomenessTV,’ another YouTube channel. This well-known individual is also a singer, novelist, and actor. It’s true what you just read! Graceffa has made a few film and television appearances. For his work in “Storytellers,” he received the 2014 Streamy Award for “Best Male Actor in a Dramatic Web Series.” Even more recently, in 2016, Joey Graceffa co-authored the book “Children of Eden,” which was published.

With the help of his high school friend and coworker Brittany Joyal, Joey Graceffa began creating YouTube videos at the age of 16 for his now-defunct account WinterSpringPro. He launched the YouTube channel “JoeyGraceffa” two years later, and he started making videos on it.

People began subscribing to his channel because they thought his videos to be intriguing. Later, Graceffa began participating in challenges and tag videos with other YouTubers. After some time, he began to concentrate on gaming, and under the moniker “JoeyGraceffaGames,” he established a second channel for it.

He increased the number of subscribers to both of his channels as a result. His first channel currently has over 7.4 million subscribers, and his gaming channel has over 2 million. Joey posts videos to his channels practically every day to keep his fans informed and to maintain their interest. With more than 3.54 million Twitter followers and more than 5.3 million Instagram followers, this YouTube sensation is likewise well-liked on those platforms.

The YouTube celebrity, his pal, and Meghan Camarena participated in season 22 of the reality competition series “The Amazing Race” in 2013. Later, the two worked together once more on “The Amazing Race: All-Stars.” Early in 2014, Graceffa launched the web series “Storytellers.” He produced the two short films “Eon” and “Ethereal” in the same year.

He later produced many short films for BlackBoxTV. He also signed up for the online program “MyMusic.” He had an appearance in a season of the reality TV series “Fight of the Living Dead” in 2015. In the same year, he also published a memoir titled “In Real Life: My Journey to a Pixelated World” and the song “Don’t Wait” for a music video.

The latter covered his personal and professional lives, touching on issues including his mother’s drinking, his brother’s autism, his time in high school, the start of his YouTube career, and more. He launched the jewelry line “Crystal Wolf” the following year.

Along with other YouTubers, he also appeared in the Red mini-web series “Escape the Night.” During that time, Graceffa and his companion Laura L. Sullivan also published the adult novel “Children of Eden.” Graceffa also played a lead role in the 2017 motion picture “The Space Between Us.”

Joey Graceffa was born to Debbie O’Connor and Joe Graceffa in Marlborough, Massachusetts, on May 16, 1991. Jett is a half-brother, and Nicole is his older sister. When he was 12 years old, his mother started abusing alcohol and drugs. Childhood autism was identified in his brother.

Regarding his education, Graceffa attended Marlborough High School, where he received his diploma in 2009. He then enrolled at Fitchburg State College to pursue a film studies degree. He did leave there, though, after a year. He came out as gay on YouTube in 2015; Graceffa has been dating fellow YouTuber Daniel Preda since 2014.

An American actor, YouTube star, author, producer, and singer with a $12 million fortune is Joey Graceffa. In May 1991, Joey Graceffa was born in Marlborough, Massachusetts. He has two YouTube channels for blogging and video gaming. YouTube views for Graceffa amount more than 2.2 billion.