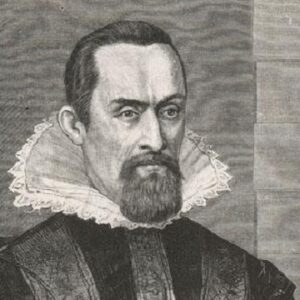 Johannes Kepler was a well-known German mathematician and astronomer who discovered the planets’ ovoid motions around the sun. Kepler is most renowned for his accomplishments in geometry, optics, and philosophy. He was the first astronomer to enunciate the fundamental laws of planetary motion. The discovery of Kepler’s Star, the ‘Astronomia Nova,’ and the ‘Kepler Conjecture’ were among his major accomplishments. Many astral components were named after him because he was a significant figure in astronomy, such as ‘Kepler’s crater on Mars,’ ‘The Kepler Moon crater,’ and so on. Kepler focused on mathematics and the growth of geometry in addition to astronomy. He devised the ‘Kepler Triangle’ and the ‘Kepler Problem,’ which were published in three sections and investigated various aspects of geometric progression, as defined by the ‘Pythagorean Theorem’ and the ‘Golden Ratio.’ He also studied astrology as a sideline and produced a few books on the subject, including ‘De Fundamentis Astrologiae’ and ‘Dissertatio con Nuncio Siderio.’ During his lifetime, he worked for Tycho Brahe, a Danish nobleman, and even acted as a counselor to Emperor Rudolph II. Continue reading to learn more about this fascinating individual.

Heinrich Kepler and Katharina Guldenmann had Johannes Kepler on December 27, 1571 in the Stuttgart region of Germany. His family was thought to be immensely affluent, but by the time Kepler was born, the family’s fortune had plummeted. Heinrich Kepler, Johannes’ father, worked as a mercenary and abandoned the family when Johannes was just five years old. Katharina Guldenmann, his mother, was a herbalist and healer who eventually tried her hand at witchcraft for a profession. According to legend, as a child, Kepler was a sickly-looking lad who was cognitively and physically weak.

However, he developed an interest in mathematics in his early years and frequently impressed people with his mathematical abilities. Kepler was also exposed to astronomy at a young age, and his enthusiasm for the subject lasted the rest of his life. He and his family saw several comets and eclipses on a few times, but his poor vision and damaged hands from smallpox put him at a disadvantage when it came to observational astronomy.

After finishing grammar and Latin school in 1589, Kepler enrolled at the University of Tubingen’s Tubingen Stift. It was here that he established himself as a capable astrologer and demonstrated his intelligence as a mathematician. Vitus Muller and Jacob Heerbrand, two well-known philosophers and theologians, taught him philosophy and theology. Kepler studied the Copernican and Ptolemaic systems of planetary motion at the University of Tubingen. He adhered to the Copernican worldview, believing that the Sun was the universe’s primary source of motive force. Kepler was interested in becoming a pastor at the end of his schooling, but he abandoned his intentions when he was offered a position as a professor of mathematics and astronomy at a Protestant school in Graz. At the age of 23, Kepler took the professorship in 1594.

Kepler claimed to have had a “epiphany” concerning the cosmic plan of the universe’s structure while teaching at a Protestant school in Graz. Kepler used the periodic conjunction of the planets Saturn and Jupiter in the zodiac to defend his Copernican views. He also addressed the polygonal ratios between the planets, claiming to be certain in the universe’s geometry.

The majority of Kepler’s Copernican hypotheses arose from his beliefs about the relationship between scientific and theological conceptions of the universe. As a result, in 1596, he published ‘Mysterium Cosmographicum,’ which is considered to be one of the most contentious astronomical books ever written. Kepler’s reputation as a good astronomer grew as a result of this. Later, Kepler made minor changes to his writings and even used them as a foundation for future efforts. In 1621, he published a second edition of ‘Mysterium,’ enhancing and clarifying the information from the first.

Kepler became ambitious after the publication of ‘Mysterium,’ and decided to broaden his scope of work. He intended to publish four more books on the stationary parts of the cosmos, the effect of the skies on the earth, planetary motions, and the physical nature of astral objects. He even sought permission from several astronomers whom he admired and worshiped by sending his proposals and achievements to them. He befriended Tycho Brahe in one of these pursuits, with whom he discussed a wide range of astronomical and cosmic phenomena.

Meanwhile, Kepler’s work at the Protestant school of Graz was jeopardized by rising religious tensions, so he left to join Tycho in his astronomical studies. Kepler left the Graz school on January 1, 1600, to collaborate with Tycho Brahe. ‘Astronomiae Pars Optica,’ ‘Rudolphine Tables,’ and the ‘Prutenic Tables’ were among the excellent works produced and published by the duo during their time together. Emperor Rudolph II received the Rudolphine and Prutenic Tables. However, Tycho died unexpectedly in 1601, and Kepler was chosen as the imperial mathematician, with the task of completing the work that Tycho had suggested. Kepler even functioned as the Emperor’s primary astronomical counselor. He also pursued his astronomical studies while assisting the monarch in times of political strife. Kepler began collaborating with Galileo Galilei in 1610, and he even published his own telescopic observations of satellites orbiting several planets. Kepler created his own telescope for astronomical observations in 1611 and named it the ‘Keplerian telescope.’

Kepler noticed a dazzling new evening star in 1604, and couldn’t believe his eyes when he saw a nebula. A supernova like this could only be seen once in 800 years. It was supposed to have been seen twice: once during Charlemagne’s rise to power and once during the birth of Christ. Following this one-of-a-kind sighting, Kepler focused on the star’s astrological features and even started researching celestial spheres. His insights on parallax and astronomy propelled him to prominence and aided in the further development of his image.

During his lifetime, Kepler experienced many emotional upheavals. He married Barbara Muller, a widower woman with a small daughter, Gemma, who had been widowed twice. On April 27, 1597, Kepler married Muller. Kepler had two daughters in the first year of his marriage, both of whom died in infancy. In the years that followed, the couple had three additional children. Barbara’s health, however, deteriorated, and she died in 1612.
Kepler remarried on October 30, 1613. This time, he married Susanna Reuttinger, 24, after examining 11 other candidates. The first three children born to this couple perished while they were little. The second marriage, it is believed, was happier than the first. In the midst of all of this emotional turmoil, Kepler’s mother was accused of witchcraft and sentenced to fourteen months in prison. Kepler was believed to be by her side during the trial.

Kepler died before witnessing the Mercury and Venus transits, which he had been looking forward to. After a brief illness, he died on November 15, 1630 at Regensburg, Germany. Kepler’s laws were treated with mistrust for many years. Several astronomers tested Kepler’s theories in the years afterward, and they gradually grew to agree with his conclusions. Many astronomers read the ‘Epitome of Copernican Astronomy,’ and for many years, it was the primary channel through which Kepler’s theories circulated.
Many prominent scientists, including Newton, based their theories on Kepler’s findings. Kepler’s philosophical and mathematical works were very well-known. Famous composers wrote many music compositions and opera pieces for Kepler, including ‘Die Harmonie der Welt.’ NASA announced the ‘Kepler Mission’ in 2009 to recognize Kepler’s contributions to astronomy.

Astronomiae Pars Optica (New Astronomia)
Cosmographic Mysteries
Somnium
Hexagonal Snow as a New Year’s Gift
The Law of Continuity of Kepler’s Conjecture
The Laws of Planetary Motion by Kepler
Harmonices Mundi is the epitome of Copernican astronomy.
Tables of Rudolphine