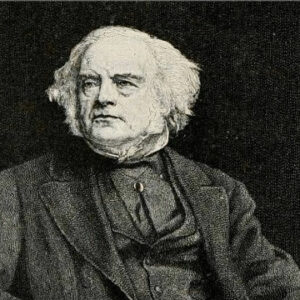 John Bright was a Liberal politician in the United Kingdom. This radical politician lived at the same time as Queen Victoria and was a great speaker. His friend Richard Cobden brought him into public life. He came from a good Quaker family. He was first chosen to represent Durham in the British House of Commons. Later, he was also chosen to represent Manchester and Birmingham. Near the end of his life, he was the Chancellor of the Duchy of Lancaster. As a member of the Anti-Corn League, he led the fight against the Corn Laws, which made it very expensive to bring wheat and other food grains into the country. The Laws helped protect the wealthy landowners, but they made things worse for the poor. Working with Cobden, he made possible the Cobden-Chevalier Treaty, which was the first step toward a free trade policy. The Reform Act, which gave every adult male in a constituency the right to vote and changed how constituencies were drawn, is another example of how well his liberal ideas worked. As a Quaker, he was against slavery and tried to keep peace. He spoke out against the Crimean War and didn’t back down, even though he lost his seat in the Commons. People remember him for his clear, commanding speeches that were full of metaphors, biblical references, and wit.

John Bright was born in the English town of Rochdale on November 16, 1811. He was one of Jacob Bright’s 11 children with his second wife, Martha Wood. Jacob was a Quaker, like his wife, and ran a successful cotton-spinning mill.

He went to a boarding school near his home that was run by William Littlewood. He also went to the Ackworth School, the Bootham School in York, and a school in Newton, which is close to Clitheroe.
He studied Latin and Greek, and he loved reading English books. He was a part of the Rochdale Juvenile Temperance Band, where he got better at speaking in public.

When he was done with school, he went to work for the family business. He joined his brother in a campaign against the Anglican Church in Rochdale getting money from the government.

In 1838, John Bright met Richard Cobden, an alderman of the Manchester Corporation. Cobden asked Bright to go to Rochdale and speak against the Corn Laws. The next year, he joined the Anti-Corn Law League.
During the national fight against the Corn Laws, he gave a lot of speeches calling for their change. He said it made the gap between the rich landowners and the poor peasants and workers even bigger.

In 1843, the people of Durham chose him to be a member of the House of Commons. He led groups of people to talk to the home secretary and the Board of Trade about getting rid of the Corn Laws.
In 1843, when he gave his first speech in the Commons, he agreed with liberal politician William Ewart’s call for lower import taxes. But the motion was turned down.

The Anti-Corn Law League, which was led by Cobden and Bright, stepped up its campaign to the point where it could no longer be ignored. The leaders were a good fit for each other. Cobden’s speeches were full of arguments, but Bright’s were full of rhetoric.

Lord Palmerston, who was Secretary of State for Foreign Affairs, led an aggressive foreign policy that he did not agree with. He agreed with what Cobden said about the Crimean War, which started in 1854 and worked to stop it.

The people of Britain were very behind in their government’s war efforts. Bright lost his seat in the General Election of 1857, but he won it back in a by-election. He always felt the same way about the war.

The Indian Mutiny started in 1857. He thought that bad British rule caused the Mutiny, and he was in favor of letting the Indians choose their own government.
In 1858, he gave a speech in which he said that only 1/6 of adult men in Britain had the right to vote. He also wanted to make voting secret and change the way districts were drawn.

In line with his Quaker beliefs, he was against slavery and praised Abraham Lincoln. But because of his religion, he couldn’t ask his government to send troops to help the Unionists.

In 1868, Prime Minister Gladstone made him President of the Board of Trade. As President, he oversaw the passing of many measures that were important to him, such as changes to education and the start of the secret ballot.

He did not agree with Gladstone about giving Ireland its own government. Bright said that he was not ready to give power to Irish nationalists who had shown disrespect for the government of parliament.

In 1846, John Bright’s fight against the unfair Corn law paid off when PM Robert Peel’s government passed a law that cut the tax on oats, barley, and wheat to just one shilling per quarter.

He was the first person in parliament to bring up the idea of free trade with France, and he backed Cobden’s work in that direction. In 1860, the Anglo-French Free Trade Treaty, also called the Code-Chevalier Treaty, was signed.

The 1867 Reform Act was a win for him because it gave every adult male householder in a constituency the right to vote. It also changed the boundaries of smaller constituencies to take into account the number of people who lived there.

In 1886, John Bright got an honorary Doctor of Civil Law from Oxford. It is the University’s second-highest degree after the Doctor of Divinity, and heads of state usually get it.

In 1839, John Bright married Elizabeth Priestman from Newcastle, and they had a daughter named Helen. He married Margaret Elizabeth Leatham after Elizabeth died and had seven more children with her.

He died on March 27, 1889, in his home, One Ash. He had lung congestion, which was made worse by his diabetes and chronic nephritis. He was buried in Rochdale. At Westminster Abbey, a funeral service was held.

John is one of the wealthiest politicians and is on the list of the most popular ones. Wikipedia, Forbes, and Business Insider all say that John Bright has a net worth of about $10 million.

This British Quaker politician said, “I am for peace, retrenchment, and reform, which was the slogan of the great Liberal Party thirty years ago.”

This British politician is known for his passionate speeches. It is said that he came up with the phrases “flog a dead horse” and “mother of parliaments.”