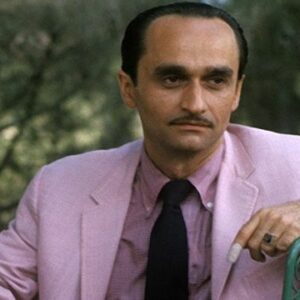 American actor John Cazale is most known for his portrayal of “Fredo Corleone” in the Academy Award–winning film “The Godfather.” He was considered highly by his peers and fellow performers and was one of Hollywood’s best character actors. In reality, Cazale’s career, which was abruptly ended by his cancer death, lasted only five films and one television short. Although his acting career was brief, he quickly made a name for himself and shared the screen with notable actors like Robert De Niro, Christopher Walken, Marlon Brando, Al Pacino, and Gene Hackman. He had a difficult start to his professional career and initially had a lot of establishing to do. Ultimately, Cazale achieved success and a reputation in the film industry because of his commitment and diligence. When he suddenly grew unwell and passed away within a year, his career was going well. At the 2009 Sundance Film Festival, a documentary named “I Knew It Was You” was shown in his honor. Numerous well-known people, including his longtime friend and fellow actor Al Pacino, Meryl Streep, Robert De Niro, Richard Dreyfuss, Gene Hackman, Francis Ford Coppola, Steve Buscemi, and Sidney Lumet, shared their perspectives on his greatness and character in the film.

On August 12, 1935, John Holland Cazale was born in Revere, Massachusetts. His mother Cecilia Holland was Irish-American, while his father John Cazale was an Italian-American. With an elder sister, Catherine, and a younger brother, Stephen, he was the middle child.

Cazale studied theater at the Buxton School in Williamstown, Massachusetts, before enrolling at Oberlin College in Ohio. In the end, he changed schools to Boston University to study under Peter Kass.

John Cazale began acting in theatre performances after earning his degree from Boston University. He also worked as a cab driver to support himself. He performed in two of the Charles Playhouse’s plays in 1959, “Hotel Paradiso” and “Our Town,” while working there. Jean Pierre Frankenhuis, a critic, gave Cazale great marks for his performance in “Our Town,” calling it “stupendous,” “touching,” “thrilling,” and “hilarious.”

He relocated to New York City in search of greater performing possibilities, where he worked as a photographer to support himself while he pursued acting roles. Before making an appearance in the 1962 Marvin Starkman-directed short film “The American Way,” he had roles in a number of plays.

Cazale had to wait a long time to break into Hollywood, but his perseverance paid off when, in 1972, he was cast as “Fredo Corleone” in Francis Ford Coppola’s film “The Godfather.” Casting director Fred Roos noticed him after seeing him perform on stage and chose him for this part. Cazale co-starred in the movie with his pal Al Pacino.

He landed a part in Coppola’s 1974 film “The Conversation” after wowing him with a brief but outstanding performance in “The Godfather.” He appeared in the movie as “Stan” and shared the screen with notable actors like Gene Hackman. The movie received an Academy Award nomination for Best Film.

John Cazale reprised his role as “Fredo Corleone” in the second installment of the “The Godfather” series in 1974. In this picture, his character was given a more significant role, and the film’s emotional ending cemented his reputation as a skilled character actor.

He co-starred with Al Pacino in the 1975 American crime drama movie “Dog Day Afternoon,” which was written and directed by Sidney Lumet. The filmmaker expressed his admiration for Cazale’s portrayal of the role of “Salvatore Naturale,” saying that he had never seen anyone with the ability to imbue characters with such profound melancholy.

Many people consider his next film, “The Deer Hunter,” to be his best. Cazale had been identified as having cancer before the shooting started. He made the decision to pre-shoot every scene with the other participants in the movie. As the shooting went on, his health got worse. Despite being able to finish filming while still in generally good health, he passed away before the movie’s premiere.

John Cazale was an excellent actor, but his brief career saw him unable to garner any significant honors. In 1976, he was nominated for a Golden Globe for “Dog Day Afternoon” in the category of Best Supporting Actor, but he did not win.

In the movies “The Godfather” and “The Godfather Part II,” John Cazale portrayed Fredo Corleone, making him one of Hollywood’s most well-liked character actors. His moving portrayal of the character did the part complete honor.

The part of “Salvatore Naturale/Sal” in Sidney Lumet’s movie “Dog Day Afternoon” was offered to Cazale. He shared the screen with Charles Durning, James Broderick, and Al Pacino in the well-received blockbuster movie. He was nominated for “Best Supporting Actor – Motion Picture” at the Golden Globes.

Actress Meryl Streep and John Cazale were together from 1976 until his passing.
He performed in his final stage production, “Agamemnon,” at the Vivian Beaumont Theatre on April 29, 1977. Soon later, he became ill and was found to have lung cancer. Despite receiving several forms of treatment, cancer spread to his bones within a year.

On March 13, 1978, he passed away with Meryl Streep by his side. Al Pacino, a close friend of Cazale’s for a lifetime, said that Meryl was absolutely in love with him and committed to him till the end and that she never left his side throughout his sickness.

Cazale, John Actor John Cazale from the United States had a net worth of $2 million. August 1935 saw the birth of John Holland Cazale in Revere, Massachusetts, and he passed away in March 1978. The Academy Award for Best Picture was nominated for each of the five movies he starred in. In 1962 animated short The American Way, he made his debut. In 1968, he made an appearance on an episode of N.Y.P.D. Fredo in The Godfather, Stan in The Conversation, Fredo Corleone in The Godfather: Part II, Sal in Dog Day Afternoon, and Stan in The Deer Hunter were all played by Cazale. In the 1977 television miniseries The Godfather: A Novel for Television, he also portrayed Fredo Corleone. The Godfather Part III contains old footage of John. After relocating to New York, he met Al Pacino and performed on stage alongside Robert De Niro. He worked with and dated Meryl Streep, who is an actress. In 1976, Cazale received a Golden Globe nomination for Best Supporting Actor for his work in Dog Day Afternoon. Despite receiving a terminal lung cancer diagnosis, John decided to keep acting. At the age of 42, John Cazale passed away on March 12th, 1978.

He had been a courier at Standard Oil in his early 20s and was pals with the renowned actor Al Pacino.
He worked as a cab driver, a photographer, and a courier in addition to becoming an actor to support himself.