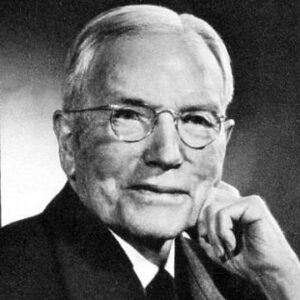 John D. Rockefeller, Jr. was a prominent philanthropist and businessman in the United States. He was John D. Rockefeller’s fifth and final child. He was the father of the illustrious Rockefeller family of five brothers. Rockefeller, Jr. fundamentally altered the family’s identity and the influence of its legacy by associating the family name with philanthropy and social issues. He also demonstrated a strong commitment to environmental conservation by donating tens of thousands of acres to Wyoming’s Grand Teton National Park and Maine’s Acadia National Park. He donated about $537 million to numerous philanthropic initiatives during his career as a notable philanthropist.

John D. Rockefeller, Jr. was born in Cleveland, Ohio on January 29, 1874, the fifth and final child of John D. Rockefeller and Laura Celestia Spelman.
He was a member of Park Avenue Baptist Church, located on 64th Street (now Central Presbyterian Church). He attended Browning School, which was housed in a brownstone on West 55th Street owned by the Rockefellers.

Rockefeller, Jr. desired to attend Yale but was convinced to enroll at Baptist-oriented Brown University by William Rainey Harper, president of the University of Chicago. He was a member of both the Glee and the Mandolin Clubs at the university. He took a Bible lesson and was voted president of the junior class. His exceptional conscientiousness distinguished him from the sons of other wealthy individuals.

In 1897, Rockefeller, Jr. earned a Bachelor of Arts degree. He had taken nearly a dozen social studies courses, including Karl Marx’s Das Kapital. He also became a member of the fraternity Alpha Delta Phi and was elected to Phi Beta Kappa.

In 1910, as a result of a controversy involving the then-CEO of Standard Oil, John Dustin Archbold, and bribery paid to two important Congressmen, Rockefeller, Jr. was forced to resign from both firms. He most likely did so to demonstrate that his generosity is independent of commercial and financial objectives.

The Ludlow massacre occurred in April 1914 at the Colorado Fuel and Iron Company’s coal mine (CFI). Rockefeller, Jr. had controlling shares in the corporation and served as the company’s absentee director. Twenty persons were killed in the accident, and Rockefeller, Jr. was called before the US Commission on Industrial Relations in January 1915 to testify.

William Lyon MacKenzie King and Ivy Lee recommended he meet with union organizer Mary Harris “Mother” Jones and admit his error during his testimony. MacKenzie King later stated that this statement was a watershed moment in the life of Rockefeller, Jr. and helped restore the Rockefeller family’s reputation.

While other corporations and businesses suffered greatly during the Great Depression, Rockefeller, Jr. grew and became one of the top real estate owners in New York City. He was the only financier of a massive 14-building real estate project located in Manhattan’s geographic core, Rockefeller Center. His clout aided in the complex’s attraction of a number of blue-chip tenants, including GE and RCA, NBC and RKO, as well as Standard Oil of New Jersey (Esso), and Associated Press and Time Inc.

In 1921, Rockefeller, Jr. got around 10% of the Equitable Trust Company’s shares from his father, making him the bank’s largest shareholder. In 1930, the Equitable Trust Company combined with the Chase National Bank, which is today known as JP Morgan Chase, to form the world’s largest bank. Though his stockholding was reduced to only 4% following the merger, he remained the bank’s top stakeholder.

He founded the Dunbar National Bank in Harlem in the late 1920s, which was located inside the Paul Laurence Dunbar Apartments at 2824 Eighth Avenue near 150th Street. This bank was unique in the city since it employed African Americans as tellers, clerks, bookkeepers, and in senior management positions. Regrettably, the bank was forced to close after only a few years of operation.

Philanthropy Rockefeller, Jr. is primarily renowned for his philanthropic efforts, having donated over $537 million to a variety of charitable causes during his lifetime. In 1900, he gave money from his family to help create a medical laboratory on the Cornell Medical Center campus.

This clinic evolved into Memorial Hospital and then into the world-renowned Memorial Sloan-Kettering Cancer Center decades later. In May 1913, he became the inaugural president of the Rockefeller Foundation, greatly expanding the scope of the institution founded by his father. He then became involved in the creation of his father’s other institutions, including Rockefeller University and the International Education Board.

He founded the Laura Spelman Rockefeller Memorial in 1918, which was eventually absorbed by the Rockefeller Foundation in 1929. In the 1920s, he also contributed significantly to the restoration and rehabilitation of significant buildings in France following World War I, including the Rheims Cathedral, the Château de Fontainebleau, and the Château de Versailles, for which he received France’s highest decoration, the Grand Croix de la Légion d’honneur, in 1936.

Rockefeller, Jr. was a devout internationalist who generously sponsored League of Nations activities. He also financed the Council on Foreign Relations’ establishment and ongoing expenses, as well as its initial headquarters building in New York in 1921. In 1924, his wife urged him to make a significant financial contribution to Margaret Sanger’s pioneering work on birth control and involvement in population issues.

Rockefeller, Jr. was a continuous advocate for and supporter of the United Nations’ creation. He financed the League of Nations and also donated a large library to the League in Geneva, which is currently used by the UN. In 1946, he purchased land along Manhattan’s East River for $8.5 million from prominent New York real estate magnate William Zeckendorf and donated it to the United Nations.

Rockefeller was well-known for his philanthropy, donating approximately $537 million to a variety of causes during his lifetime, compared to his own family’s $240 million.