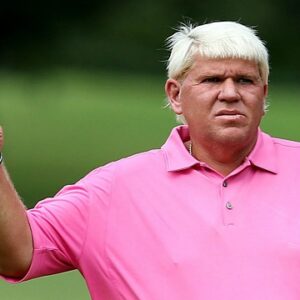 John Daly is a well-known golfer from the United States. His driving stance, which he takes off the tee, has earned him the nickname “Long John” among his peers. He is also a well-known figure in the media due to his outlandish appearance, which defies the stereotype of a country club member. In all of his years as a public figure, his rough and tumble personal life has been quite the talk of the town. His most well-known achievement was his spectacular transformation from ‘zero to hero’ in the 1991 PGA Championship. He was dubbed a “dark horse” after his victory over Costantino Rocca in the 1995 open championship. Daly’s performance began to fluctuate after 2006, and his career began to decline. He began to be in the news mostly as a result of his sponsorships and commercial activities, which eventually became his main source of revenue. Daly has also worked in the garment industry, published two CDs, and runs a golf course design company. He is still the only golfer from either the United States or Europe to win two major golf events without competing in the Ryder Cup.

John Patrick Daly was born on April 28, 1966, in Carmichael, California, to Jim and Lou Daly. After a girl, Leslie, and a boy, Jamie, John was their third and youngest child.

Jim, John’s father, was absent for the majority of his children’s growing up years. He worked in nuclear power facilities and moved around a lot, often for weeks or months at a time. The children missed their father and, without adequate supervision, wandered off on their own.

After his father gifted him two cut-off golf clubs when he was four years old, John discovered his interest with the sport of golf. This was primarily out of remorse for not being able to spend much time with him. John became engrossed in the sport and began practicing for enjoyment, eventually becoming addicted to it.

Because of his father’s hectic schedule, the family moved about a lot, and when they finally settled in Arkansas, John’s interest in golf blossomed into a full-fledged obsession. He began messing around with his golf clubs at a nearby ‘nine hole layout’ and quickly got enamored with the sport, spending hours upon hours learning the ins and outs of the game.

John enjoyed football and baseball as a kid and was a member of his school’s baseball team. But it never satisfied him, and he continued to enjoy golf throughout his school years.

John also had a brief affair with alcohol when he was a child, which followed him into adulthood. He first tried beer when he was eight years old, and he has stated in various interviews that he enjoyed it so much that he began sneaking into his parents’ house and drinking their homemade wine.

Daly began his professional golf career as an amateur at the US Open, when he underperformed all expectations. By the following year, he had turned professional and had a respectable victory in the Missouri Open. In 1990, he won the Ben Hugan Utah Classic and wowed the crowd with his skill and aptitude.

The PGA Championship in 1991 brought him the recognition he deserved. His aggressive hooks and swings drew a lot of media attention, and he ended up winning the tournament despite being a complete novice, earning him a cult-like following among sports enthusiasts.

Between 1992 and 1994, he continued to win, but it was during this time that he began to drink more and more heavily, which finally became more of a talking point about him than his game. In 1994, he was suspended by the PGA Tour for repeatedly walking off the course during a tournament, forcing him to confront his drinking and admit himself to a rehab facility.

Daly won his second major at the British Open in 1995, but his drunkenness and personal life continued to drag him down, and his career was cut short, to to the chagrin of his fans and colleagues. His game was seriously harmed during those years as a result of weight and alcohol issues, which also played havoc in his personal life.

In 2004, he made a successful comeback with a victory in the Buick Invitational, earning him the title of ‘PGA Tour Comeback Player of the Year.’ In that year, he finished fourth in the statistical golf rankings, but he didn’t win another tournament until 2014, when he won the Beko Classic by one stroke.

Other Projects of John Daly

Daly teamed up with Loudmouth Golf to create a line of gear that was so popular that it was difficult to keep up with demand.

Daly also owns a golf course design company called ‘JD Designs,’ which has designed multiple courses in the United States, Canada, and Europe, making it one of the most prominent companies in the industry.

John Daly signed an endorsement agreement with Rock Bottom Golf, a well-known cheap golf retailer, in 2014.
Daly also started a wine line called John Daly Wines later on, but it was a flop, and he had to close it down soon after.

With the debut of Oxygen Games’ ‘John Daly’s Prostroke Golf,’ which portrays Daly as both a teacher and a player, Daly has also become the face of a video game. The game, which featured various golf courses modeled after real ones from across the world, was a major hit with golf fans.

John Daly has dabbled in music as well. He made his debut as a backing vocalist on Kid Rock’s song “Half Your Age.” Daly released his studio album ‘I Only Know One Way’ in 2010, on which he wrote and sang eight songs. Some famous personalities in the music industry praised the effort and appeared on the CD in various songs

John Daly has battled alcoholism his entire life and has suffered significant consequences as a result of his inebriated behavior. Since then, Daly has been able to successfully control his desires, and when asked about his long battle with addiction, he blamed it on his father, who was an alcoholic and abuser.

Daly’s weight became such a worry for him in 2009 that he had to have Lip-band surgery to get rid of the excess fat. He began eating healthier and limiting his alcohol use, and as a result, he lost more than 100 pounds.

When it comes to relationships, he’s had a very poor track record. He’s been married four times, and none of them have worked out. The majority of his marriages ended because of his famed claimed aggressive behavior and his alcoholism.

John Daly is a professional golfer from the United States with a net worth of $2 million. John’s net worth should be much larger, but he has squandered tens of millions of dollars over the years, owing to a severe gambling problem as well as several divorces. This will be discussed more in this post.

Following an incident in 2008, John Daly was sentenced to prison.
His career earnings from golf are estimated to be around USD 10 million, which is a pittance by popular golfer standards. He has stated that he gambled away the most of his fortune.
Daly reportedly gave USD 30,000 to a family in need, despite the fact that he was in debt at the time.
Daly once gambled away USD 1.65 million.

He was reportedly kicked off a flight for harassing a British flight crew while inebriated.

John Daly’s net worth is estimated to be around USD 20 million as of April 2017. The majority of his earnings come from music sales, endorsements, and other business endeavors.