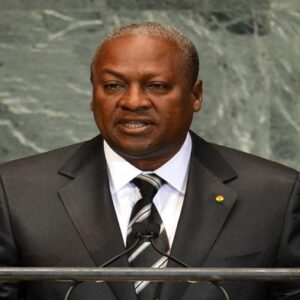 Ghana’s president, John Dramani Mahama, is a well-known figure. He comes from a family with a long history of involvement in the country’s politics. His father was the first Member of Parliament from his constituency, therefore Dramani grew up knowing a lot about politics. As he grew older, he carried on his family’s political history and proved to be a superb leader. He was assigned to various positions in the Ghanaian government before to becoming the country’s president. In fact, he is the first president to have been elected to practically every level of government office prior to being appointed president. He possesses excellent leadership capabilities that have helped him earn a variety of positions, and he has demonstrated his abilities by completing his tasks in these positions to the best of his ability. His administration has steered his country toward progress and continues to do so. This leader is concerned about the environment, particularly the widespread usage of plastic and the waste it produces, which pollutes the ecosystem. He is also a writer who publishes a variety of articles and columns in which he shares his opinions. He also wrote the book ‘My First Coup d’Etat and Other True Stories from Africa’s Lost Decades.’

He was born on November 29, 1958, into a political family in Damongo, the capital of the West Gonja province. Emmanuel Adama Mahama, his father, was a Member of Parliament from the West Gonja constituency.

Dramani began his studies at the ‘Achimota School’ and afterwards transferred to the ‘Ghana Secondary School.’ He got a bachelor’s degree in history in 1981 and a postgraduate diploma in communication studies from the ‘University of Ghana’, Legon, five years later.

He subsequently moved to Moscow, where he received his post-graduate degree in 1988 from the ‘Institute of Social Sciences,’ with a specialization in social psychology.

He was a member of the Japan embassy in Accra, Ghana’s capital, from 1991 to 1995, when he worked as the Officer of Information, Culture, and Research.

Dramani participated in a training program for Overseas Public Relations Staff held by the ‘Japanese Ministry of Foreign Affairs’ in Tokyo in 1993. In Nairobi, Kenya, he also took part in a management development program run by the organization ‘Plan International.’

He worked with the anti-poverty NGO ‘Plan International’ in Ghana from 1995 to 1996 as the International Relations, Sponsorship Communication, and Grants Manager.

This president first became involved in politics in 1996, when he was elected to the Ghanaian Parliament as a member of the Bole/Bamboi Constituency for a four-year term.

After being re-elected in the year 2000, Mahama continues to serve as a member of the Bole/Bamboi Constituency.
In 2001, this leader was appointed as the Minority Parliamentary Spokesman for Communications, a position he held for four years.

The following year, he worked for the ‘National Democratic Congress’ (NDC) as Director of Communications and a part of the ‘International Observers’ team, which was chosen to ensure that the ‘Zimbabwe’s Parliamentary Elections’ went off without a hitch.

This politician became a member of the Pan-African parliament in 2003 and chaired the ‘West-African Caucus.’
In 2004, he was re-elected as a member of Parliament for the Bole/Bamboi Constituency.

In the year 2005, he was elected as the Foreign Affairs Minority Spokesman.
He was elected Vice-President of Ghana in 2009 and served in that post for three years before being elected President of the country.

As President of Ghana, Mahama committed to work toward the realization of Ghana’s visionary program, dubbed the “Better Ghana Agenda.” He has been working on this agenda nonstop, with the goal of bringing about significant improvements in the country.

Awards and Achievements: The ‘Ekiti State University’ in Nogeria awarded this leader an honorary doctorate in the field of public administration.

For his support of Cuba, he was also awarded a ‘Friendship Medal’ by the Cuban government.
Dramani has also received the ‘Daniel Award’ from the Ghanaian ‘Assemblies of God’.
The ‘African Servant Leadership Award’ was bestowed upon him by the ‘Graduate School of Governance and Leadership.’

The ‘Africa Award’ for ‘Excellence in Food Security and Poverty Reduction’ was given to him by the ‘Forum for Agricultural Research in Africa’ in 2013. (FARA).

The ‘Bill and Melinda Gates Foundation’ is also closely tied with this political figure.
Benin President Yaji Boni also bestowed the ‘Great Cross of the National Order’ on this leader. In Benin, this is the highest honor.

John Dramani is married to Lordina Dramani and they have seven children together.
The president of Ghana is said to be able to communicate in a variety of languages, including English, Ga, Dagbani, Akan, Hausa, and Gonja.

He has published numerous articles, essays, and editorials in newspapers, as well as a book titled “My First Coup d’Etat and Other True Stories from Africa’s Lost Decades” in 2012.
As a farmer, he supports the use of technology in the farming process.

His net worth is believed to be $900 million.

This leader enjoys music and is a fan of Afrobeat artists such as Fela Kuti.