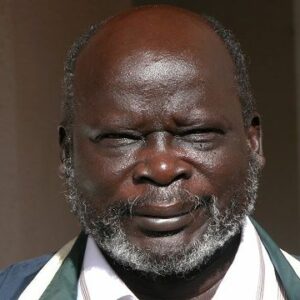 John Garang was a political leader who was from a poor tribe called the Dinka. He first fought in the first “Sudanese Civil War.” He finished his education while he was in the Sudanese army. He got a Ph.D. in agricultural economics from Iowa State University. Even after the “Civil War” was over, the leader of the government continued to serve in the army. After eleven years in the regiment, he plotted against the government and started a group of more than 3,000 soldiers called the Sudan People’s Liberation Army (SPLA). The group rose up against the Islamic government in order to get President Omar al-Bashir out of office. This movement went on for more than twenty years and became known as the “Second Sudanese Civil War.” The civil war ended when the “SPLA” and President al-Bashir signed the “Comprehensive Peace Agreement.” A few months later, Garang was named Vice-President of Sudan and the only leader of South Sudan. The new Vice President, on the other hand, was only in office for about a month before he died in a helicopter crash. Even though he has been criticized by many, this politician is known for his idea of a united country called “New Sudan” that would be run by leaders from all the tribes in the country.

John Garang was born in the village of Wangulei in Sudan on June 23, 1945, to poor parents of Dinka descent. When he was only ten years old, his parents died. A close relative sent him to elementary schools in Wau and Rumbek.

In 1962, when he was 17 years old, he had to fight in the first “Sudanese Civil War,” which was also called the “Anyanya Rebellion.” With help from his leaders, the young man was able to finish high school in Tanzania while the war in his home country was still going on.

He went to college on a scholarship and got a degree in economics from Grinnell College in Iowa, USA, in 1969. John got a scholarship to the University of California, Berkeley, because he was a good student.

But he went back to Tanzania and got a “Thomas J. Watson Fellowship” in East African Agricultural Economics at the University of Dar es Salaam. He joined the “University Students’ African Revolutionary Front” when he was in college.

After he finished school in Tanzania, he went back to Sudan and served in the army there from 1972 to 1983. After the “Addis Ababa Agreement” was signed and the civil war stopped, this is what happened.

After taking the “Infantry Officers Advanced Course” in Georgia, USA, he was given the rank of colonel during his time of service. John also took a four-year break to get his master’s and a doctorate in agricultural economics from Iowa State University.

During this time, he became a teacher at a military school in the Wadi Sayedna neighborhood. He also worked as a researcher for the “Army Head Quarters” in Khartoum, the capital city of Sudan.

In the same year, he went to Bor, South Sudan, where he seemed to be trying to comfort soldiers from “Battalion 105” who didn’t want to be moved to North Sudan. Garang’s real plan, though, was to join up with these soldiers and leave the army to join the rebels fighting against the government.

During the attack on Bor, the soldiers quit the army and joined John’s group of rebels in Ethiopia. In the next two months, the leader put together the “Sudan People’s Liberation Army/Movement” (SPLA/M), which was made up of more than 3,000 people who wanted to cause trouble.

The “SPLA/M” rebelled against the Islamic government and its military rule, which led soldiers from other regiments to protest. The “Second Sudanese Civil War,” which lasted for more than twenty years, started here. Even though most of the rebels were not Muslims, religion wasn’t the main reason for the uprising.

The political leader campaigned for a region called “New Sudan,” which would be a united region. He wanted to get rid of President Omar al-Bashir and set up a government that was run by people from all minorities. In 1985, the “SPLA/M” attacked Kordofan, a province in the center of Sudan. This was the first step toward this goal.

People from Uganda, Libya, and Ethiopia helped the political group take over parts of the south and call them “New Sudan.” But its fight for freedom was often marked by fights between different races.

In January 2005, President Omar al-Bashir and the leader of the SPLA signed the “Comprehensive Peace Agreement” (CPA). Six months later, Garang became the First Vice-President of Sudan and then the President of Southern Sudan.

Even though the political leader wanted to see a united country, many people said he was rude to anyone who tried to say what they thought. Also, many people think that the “SPLA’s” philosophy was an unorganized mix of different ideas, such as Christianity and Marxism.

The first Vice-President of Sudan is known for creating the “Sudan People’s Liberation Army,” a group of soldiers who fought for more than twenty years in the second “Sudanese Civil War” of independence. The leader dreamed of a united Sudan where people of all religions would help run the government and live together peacefully.

Rebecca Nyandeng De Mabior was married to Garang. She is now the President of The Republic of South Sudan.
On July 30, 2005, Sudanese politician John Garang was returning from a meeting with Ugandan President Yoweri Museveni in a Ugandan Mi-172 helicopter when it crashed, killing Garang.

Museveni was worried because the helicopter had been missing for more than a day. It was shown on the news that the political leader had safely landed. But later, it turned out to be a lie, and the public was told that he had died.

Most people say that the plane crashed because of bad weather, but there are also rumors that it could have been done on purpose. The politician’s body was brought back to South Sudan’s New Cush so that his supporters could pay their respects.

On August 3, the leader’s funeral was held in Juba. During the service, the leader’s wife, Rebecca, promised to continue the leader’s work.
The famous politician’s grave is in Juba, which is the capital city of Sudan. In 2011, a statue was put up in his honor.

John is one of the wealthiest politicians and is on the list of the most popular ones. Wikipedia, Forbes, and Business Insider all say that John Garang has a net worth of about $1.5 million.

This South Sudanese leader was always backed by President George W. Bush, who called him a “partner in peace.”