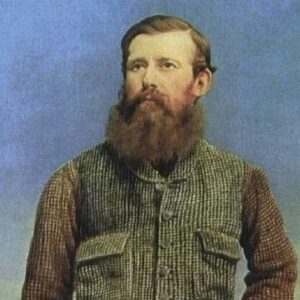 John Hanning Speke was an English explorer who was the first European to reach Lake Victoria in east Africa. Speke was an officer in the British Indian Army before he went to Africa to look for new routes. Later, he went with Richard Burton on an expedition to Africa to look for the great lake that people thought was where the Nile started. He became well-known for his search for the source of the Nile, and he was right when he said that the river began in Lake Victoria. The source of the Nile, which is thought to be the longest river in the world, has been a mystery to explorers for hundreds of years. Several trips had already been made to find the river’s source. Speke was the one who found the river’s source in the end, even though Burton didn’t believe his results because he wasn’t there when Speke made the discovery. This led to a very heated argument between the two men about where the Nile came from, and a debate was set up to clear things up. Speke died, though, before the debate could happen, and no one knows why. Years later, it was finally shown that Speke was right all along when he said that the Nile started in Lake Victoria.

John Hanning Speke was born on May 4, 1827, at Orleigh Court, Buckland Brewer, near Bideford, North Devon. This is all we know about his early life.

John Hanning In 1844, Speke was given a job in the British army and sent to India. There, he served under Sir Colin Campbell in the First Anglo-Sikh War in Punjab. He was an adventurous young man who went on trips to the Himalayas when he had time off. He went to Tibet once as well.

Speke got permission to go abroad in 1854 and took his first trip to Africa. He wanted to cross the Gulf of Aden and go to Somaliland to collect things for the natural history museum that his family runs in Somerset. But he wasn’t allowed to go on this trip because Somaliland was thought to be very dangerous.

Speke then went with the famous explorer Richard Burton on his trip to Somalia. Speke joined Lt. William Stroyan and Lt. Herne, who were already with Burton. In April 1855, the Somalis attacked the group very violently. Speke was badly hurt, but he was able to get away in the end.

Back to his job, he was a captain in a Turkish regiment at Kertch during the Crimean War (1855–1856). Late in 1856, Burton asked Speke to go with him on an expedition to look for the source of the Nile.

Speke and Burton went to East Africa to find the Great Lakes and the Nile’s long-sought source. They left Zanzibar Island in June 1857 and spent six months looking for the best way inland along the east African coast. In February 1858, they got to Lake Tanganyika.

The two had also heard that there was another lake to the northeast, so on their way back to the coast, they decided to check it out. But Burton got very sick on the way back, so Speke left him at the base camp and went on alone. Speke’s trip took 47 days and 452 miles. On July 30, 1858, he found a large lake, which he named Victoria Lake in honor of Queen Victoria.

Speke thought that Lake Victoria was where the Nile got its water. Burton, however, didn’t agree with this claim, which led to a fight between the two men. The Royal Geographical Society paid for the expedition to find the source of the Nile. The society thanked Speke for his work and sent him on a second expedition in 1860 to settle the dispute.

In April 1860, he set out on his second trip with James Augustus Grant. The expedition came to the lake from the southwest, but they had to wait a lot along the way. Grant was also sick a lot.

He was able to map a part of Lake Victoria with Grant. Speke found where the Nile leaves the lake in July 1862, and he also found the Ripon Falls. This time, Grant did not go with him because he was sick and had to stay behind. Tribal war, on the other hand, made it impossible to look into the area around the lake any further.

In 1863, Speke and Grant went back to England. There were still a lot of questions about how the Nile flowed, but the men were still welcomed home as heroes. This made Burton and Speke even angrier with each other, and Burton questioned Speke’s claims again.

The Royal Geographical Society asked Speke and Burton to have a public debate to try to settle the disagreements about the Nile. Speke, on the other hand, passed away before the debate could happen.

John Hanning Speke was the first European to reach Lake Victoria in east Africa. He named the lake after Queen Victoria to show his respect for her. He also said that the Nile River starts in the lake. Even though his finding was argued about a lot while he was alive, it was shown to be right after he died.

While he was in Africa, he fell in love with a girl named Meri who was 18. But she didn’t love him back, and it broke his heart that he couldn’t win her over.

On September 15, 1864, John Hanning Speke went to Neston Park in Wiltshire to shoot for the afternoon. There, he shot himself with a gun and killed himself. No one knows for sure if it was an accident or a suicide. He was laid to rest in Dowlish Wake, Somerset, which is where the Speke family came from.

John is one of the richest and most well-known explorers. Wikipedia, Forbes, and Business Insider all say that John Hanning Speke has a net worth of about $16 million.