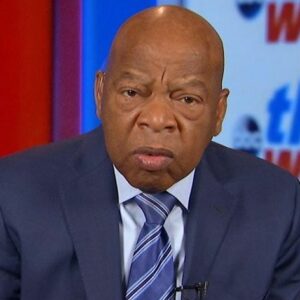 John Lewis was a member of the United States House of Representatives for Georgia’s 5th congressional district from 1987 until his death in 2020. He was one of the most prominent and influential individuals in the American Civil Rights struggle. Lewis, who grew up in segregated Alabama, knew firsthand what that meant. He was one of the “big six” organizers of the coalition that put together the historic 1963 March on Washington when he was a teenager. Between 1963 and 1966, he served as the chairman of the Student Nonviolent Coordinating Committee (SNCC). Authorities severely attacked John Lewis, one of the leaders of three Selma to Montgomery marches across the Edmund Pettus Bridge, in an incident that became known as Bloody Sunday. He joined the Democratic Party after becoming involved in politics. During his time in Congress, he was almost reverent in his dedication to his staunch liberal values, routinely opposing legislation that he believed violated them, including legislation presented by his own party. He voted for Barack Obama in 2008 and 2012 and Hilary Clinton in 2016.

John Lewis was born in Troy, Alabama, on February 21, 1940. Willie Mae (née Carter) and Eddie Lewis, his parents, were sharecroppers. He has eight siblings, two elder and seven younger.

He did not have much contact with white folks when he was a child. He attended segregated schools and had been advised by his parents not to aggressively oppose the Jim Crow South’s endemic disparities. He was tremendously influenced by and’s nonviolent defiance when he was a teenager. He approached each of them with the goal of desegregating Troy State College (now Troy University). His parents eventually persuaded him to enroll at the American Baptist Theological Seminary in Nashville, Tennessee, where he received his ordination. He went on to Fisk University and received a bachelor’s degree in religion and philosophy there.

In 1961, he was detained for the first time during the first Freedom Rides campaign, in which Lewis and 12 others traveled interstate buses to challenge a law prohibiting black and white passengers from sharing seats.

In 1963, he became the SNCC’s chairman, a post he held for three years before stepping down in 1966, when the organization began to embrace more militant ideals.

He was also a member of the “big six,” which included Martin Luther King Jr., James Farmer, A. Philip Randolph, Roy Wilkins, Whitney Young, and John Lewis, in the March on Washington in 1963.

On March 7, 1965, John Lewis took part in one of the Civil Rights Movement’s most pivotal moments. He and another activist, Hosea Williams, organized a nonviolent march from Selma to Montgomery in the pursuit of voting rights. While attempting to cross the Edmund Pettus Bridge across the Alabama River, the group of about 600 marchers ran into state government authorities, including sheriff’s officers, state troopers, and deputized “possemen.” They were pelted with tear gas, chased by horses, and thrashed with bullwhips and billy clubs.

This was done on the orders of Alabama’s segregationist governor, George Wallace. Lewis was seriously hurt, along with at least 50 other demonstrators, and had to be taken to the hospital. He had a broken skull, which left a scar that he would have to live with for the rest of his life.

Following the events of Bloody Sunday, which were broadcast live to millions of Americans, protests erupted across the country, with demands for quick action from the federal government. President Lyndon B. Johnson signed the Voting Rights Acts into law on August 6, 1965.

John Lewis moved to New York in 1966 to work as an associate director for the Field Foundation. From 1970 to 1977, he was the director of the Voter Education Project (VEP).

He first entered politics in 1977, when he ran an unsuccessful Democratic primary against Atlanta City Councilman Wyche Fowler for Georgia’s 5th congressional district. In the Jimmy Carter administration, he was promoted to associate director of ACTION, where he was in charge of the VISTA program, the Retired Senior Volunteer Program, and the Foster Grandparent Program. He resigned from there in 1981 and ran for an at-large seat on the Atlanta City Council, which he held until 1986. In 1986, he ran for Georgia’s 5th congressional district for the first time and won. In the Democratic primary, he defeated another prominent civil rights figure, Julian Bond, before defeating Republican contender Portia Scott in the general election.

Between 1988 and 2018, John Lewis was elected to the seat 16 times. Between 1991 to 2003, he was the Democrat’s Chief Deputy Whip, and from 2003 onwards, he was the Senior Chief Deputy Whip. During his political career, Lewis was noted for frequently mentioning his Civil Rights activism. He voted against the Gulf War in 1991, the United States’ trade pact with China in 2000, and Bill Clinton’s NAFTA and welfare reform. He was an outspoken proponent of homosexual rights and universal health care.

He initially backed Hillary Clinton’s presidential candidacy, but then switched his support to Barack Obama. After Obama’s election, he described it as a “down payment,” noting that there were still too many people on the margins for Dr. Martin Luther King Jr.’s dream to be realized.

John Lewis, who did not attend Donald Trump’s inaugural ceremony in 2017, has been one of the administration’s harshest critics since then.

The Obama administration presented John Lewis with the Presidential Medal of Freedom, the highest civilian award in the United States, as well as the Congressional Gold Medal in 2011.

Walking with the Wind: A Memoir of the Movement, John Lewis’ autobiography, was released in 1998.

Xernona Clayton, a mutual acquaintance and activist, introduced John Lewis to his future wife, Lillian Miles, at her New Year’s Eve party in 1967. The pair married less than a year later at Atlanta’s Ebenezer Baptist Church and relocated to a humble house in southwest Atlanta, where they lived for the rest of their lives.

They adopted John-Miles Lewis, their only child, when he was just two months old, in 1976. Clayton was their son’s godmother and remained one of the couple’s closest friends.

Lillian Miles died on December 31, 2012, 45 years after they met for the first time. Lewis revealed to media in December 2019 that he has stage IV pancreatic cancer. He died in Atlanta on July 17, 2020. At the time, he was 80 years old. John Lewis, as one of the most renowned campaigners for social justice, equality, and voting rights, has made an indelible mark on US history and, by extension, the history of the globe. His battles, as well as those of Martin Luther King, Rosa Parks, and others, prepared the path for Obama’s presidency. He was politically active even a month before his death, and in June 2020, he made his final public appearance at the Black Lives Matter Plaza in Washington.