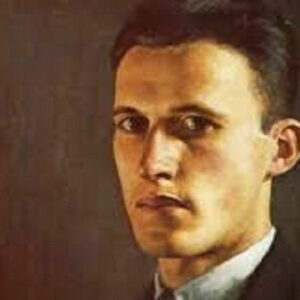 John Luke is regarded as one of Ireland’s greatest twentieth-century artists. He displayed his extraordinary talent in a variety of mediums, including painting, sculpture, murals, and printmaking. Despite taking up work at first, he did not abandon his dream of pursuing a career in the fine arts. In contrast to his self portraits, in which he depicted himself looking directly at the onlooker with a confident gaze, his portraits of other people depicted them gazing off into the distance. Although he achieved fame as a landscape painter, he also created sculptures such as the ‘Stone Head, Seraph’. His tempera paintings, which drew inspiration from Russian wood engravings and Japanese prints and woodcuts, exhibited an unmatched technical mastery, a vibrant color palette, and structural simplicity. The majority of his works are centered on a distinctive craftsmanship that combines an unusual rhythmic sense with abstract expressiveness, which he discovered in his hometown of Northern Ireland. His ethereal figures and vibrant landscapes transport the viewer to mid-century Modernism. His close ally, John Hewitt, described him as a’mural painter waiting for a wall.’ His dream came true when he was offered the opportunity to paint a large mural in Belfast City Hall, allowing him to carve out a niche among other Irish artists.

John Luke was born in Belfast, Northern Ireland, on January 19, 1906, to boilermaker James Luke and Sarah. He graduated from Hillman Street National School in 1920 and began working at the Workman and Clark Shipyard as a riveter. He later became a member of the York Street Flax Spinning Company, where he cut fiber.

He enrolled in evening classes at the Belfast School of Art while continuing to work and won first place in the ‘Object and Memory Drawing’ competition.

He won the Robert Ross Scholarship for sculpture and came in second place with his depiction of Judith and Holofernes dressed in contemporary attire on canvas.

After graduating from the Slade, John Luke’s interest shifted to sculpture, and he enrolled in evening classes at the Westminster School of Art to study wood engraving under Walter Bayes.

Two of his paintings, ‘Entombment’ and ‘Carnival,’ were exhibited at Leger Galleries in October 1930. In 1931, he returned to Belfast and began teaching at Belfast College of Art, where he earned acclaim for his composed nature and structured way of life.

Inspired by Japanese prints and woodcuts, as well as Russian ballet and book illustrations, he incorporated color woodcuts into his paintings such as ‘Farmhouse,’ ‘The Fox,’ ‘The Three Dancers,’ and ‘The Rehearsal.’

He exhibited his works in 1933 with the Northern Ireland Guild of Artists and at Dublin’s Royal Hibernian Academy (RHA).

In 1934, he began a two-year project painting portraits of his close friend John Hewitt and his wife Roberta.

However, he destroyed the portrait of Roberta, which depicted a serious and formal figure.

In 1946, he held his first solo exhibition of 85 works at Belfast Museum and Art Gallery (now Ulster Museum).

He carved two coats of arms for Governors of Northern Ireland – Lords Wakehurst in 1959 and Erskine of Rerrick in 1965 – as a great sculptor.

Despite his dislike for self portraiture, John Luke created ‘The Tipster’ (1928), a larger depiction of imaginative illusionism that was pictorially descriptive of the term ‘tipster’.

His 1940 sculpture ‘Head of a woman in profile’ is an outstanding example of direct carving in Yorkshire stone. It is renowned for its quality, strength, and durability, and accurately represents his stylization without adding any additional details.

He first gained international attention in 1951, when he painted a mural depicting the history of London in the City Hall’s dome to commemorate the Festival of Britain.

Following his mother’s death, John Luke moved to a flat in Belfast’s Duncairn Gardens, where he appears to have spent his later years in seclusion and poverty. He died in Mater Hospital on February 4, 1975.

In 1978, his works were exhibited at the Ulster Museum in association with the Arts Council of Ireland, along with a brief monograph by John Hewitt recounting his life and career.

Interestingly, his landscape ‘The Bridge’ fetched £41,500 at a 1999 London auction of his paintings.