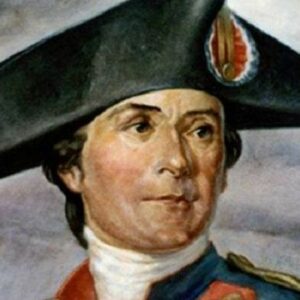 John Paul Jones was a Scottish-American sailor most known for his daring actions against British warships in the English Channel during the American Revolution. His victory over British troops earned him international acclaim as a renowned American naval hero. He began his career at sea as an adventure-seeking sailor before becoming colonial America’s first sea warrior. His daring maritime accomplishments as commander of the ‘Bonhomme Richard’ have earned him a place in US history. His valiant and heroic engagements established him as the forefather of America’s naval tradition. He led numerous navy warships and shot down a big number of enemy ships over his nearly 30-year sailing career, securing their things and returning them home. For his acts, the French authorities praised him and bestowed upon him the renowned title of ‘Chevalier,’ as well as a golden sword. In addition to his duty in the US Navy, he later joined the Imperial Russian Navy, however his time there was not particularly enjoyable. He is often referred to as the “Father of the American Navy” today.

John Paul Jones was born to John Paul, Sr. and Jean McDuff on July 6, 1747 in Arbigland estate, Kirkcudbrightshire, southwest Scotland. His father worked as a landscaper.

At the age of 13, he began his career at sea as a ship’s boy on the ‘Friendship’ under the command of John Younger, a Scottish ship owner, when he travelled to Virginia to visit his elder brother, William, in Fredericksburg.For the following 14 years, he travelled between Britain, Virginia, and the West Indies on numerous commerce and slave ships, mastering sea-sailing methods.

A Career of John Paul Jones

John Paul Jones joined the ‘King George’ as third mate in 1764 and was later promoted to first mate on the ‘Two Friends’ in 1766. Despite the fact that the job was lucrative, he grew to despise the slave trade and quit in 1768 to join ‘John.’

On his way from Jamaica to Scotland, the captain and leading mate of the ship died of yellow fever while on the way. John Paul Jones was promoted to captain after safely returning the ship to port. He led two visits to the West Indies as captain.

In 1770, he flogged one of the seamen brutally, and he died a few weeks later. As a result, he was arrested and imprisoned. He was later released, but the episode had a significant negative impact on his otherwise successful career.
He was obliged to kill the ringleader of a mutinous crew in self-defense in 1773, and then fled to Fredericksburg, Virginia, to avoid being tried.

When the American Revolution began in 1775, he proceeded to Philadelphia and enlisted as a first lieutenant on the warship ‘Alfred’ in the fledgling Continental Navy.

He was honored to fly the Grand Union Flag during his voyage to the Bahamas aboard the sloop ‘Alfred’ under the command of Commodore Esek Hopkins, and was soon handed over command of the sloop ‘Providence’.
In August 1776, he set off on the ‘Providence,’ a six-week trip across the Atlantic from Bermuda to Nova Scotia, where he seized 16 British ships.

In November 1776, he gained command of the ‘Alfred’ as captain and sailed to Nova Scotia, where he won many prizes and procured winter clothing for American prisoners held in coal mines there.

In November 1777, he was granted command of the new sloop-of-war ‘Ranger’ as a result of a disagreement with his superior, Commodore Hopkins, and sailed across the Irish Sea and St. George’s Channel, capturing several ships.

In September 1779, he commanded the 42-gun frigate ‘Bonhomme Richard’ (named after Benjamin Franklin) in the Battle of Flamborough Head, together with four other ships and two privateers, to invade England.

He overcame the 50-gun British frigate ‘HMS Serapi’s’ and the 22-gun leased ship ‘Countess of Scarborough’ in a three-and-a-half-hour gun engagement. He boarded the Serapis and went to Holland with the Countess as prizes after the Bonhomme Richard was heavily damaged.

He was released at the end of the American War and joined the Russian navy under Empress Catherine II in 1787. He served in the Russo-Turkish War from 1788 to 1789 before being released.

While serving in the Russian navy, he wrote the book “Narrative of the Campaign of the Liman.”
His time in Russia was marked by false accusations and a lack of acknowledgement on his resume. He returned to Paris in 1790 and lived there for the rest of his life.

In 1787, French King Louis XVI awarded John Paul Jones the ‘I’Institution du Merite Militaire’ medal and a gold-hilted sword, as well as the title of ‘Chevalier John Paul Jones.’
In 1788, the Russian Duke bestowed the Order of St. Anne upon him.

While in Paris, John Paul Jones’ health deteriorated steadily, and he died of interstitial nephritis on July 18, 1792.
Following a short parade of friends, servants, and faithful family members, he was laid to rest at Saint Louis Cemetery.

His bones were discovered and carried to America by US warships in 1905, more than a century later, when he was buried with full honors in the Naval Academy Chapel, Annapolis, in 1913, which today serves as a national shrine.

Estimated net worth of John Paul Jones is unknown.

When he traveled to America to avoid being tried for a murder he committed in 1773, he added ‘Jones’ to his name, which he is thought to have adopted from Willie Jones of Halifax, California.