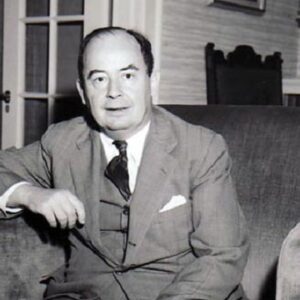 Hungarian-American mathematician, physicist, inventor, computer scientist, and polymath John von Neumann He was born into a Jewish family in Budapest and moved to the United States before the emergence of Nazi authority. He began teaching mathematics at Princeton University, but was not a successful lecturer due to his pupils’ inability to keep up with his rapid pace. Later, he began to fully blossom when he accepted a non-teaching position at the Institute of Advanced Study, which works closely with Princeton University. He began his career as a pure mathematician, but as the Second World War broke out, he grew more interested in applied mathematics, and he used his knowledge to help the war effort. He published around 150 papers during the course of his life. Sixty of them were in pure mathematics, sixty in applied mathematics, twenty in physics, and the rest were in other areas. He was a prolific writer, and his final work, ‘The Computer and the Brain,’ was released posthumously after his death.

On December 28, 1903, John von Neumann was born in Budapest to a wealthy family as Neumann János Lajos. Miksa Neumann, his father, was a banker. Kann Margit, his mother, hailed from a wealthy merchant family. Michael and Nicholas, his younger brothers, were his only siblings.
From the age of six, he could mentally divide and multiply multi-digit numbers, and by the age of eight, he was conversant with differential and integral calculus. In addition, while studying at home with a governess, he took instruction in Hungarian, English, French, German, and Italian.

János was accepted into Fasori Evangélikus Gimnázium in 1911. His teacher soon recognized his mathematical ability. Because his father demanded that he study in grades that were appropriate for his age, extra especial tuitions were created for him to train him in areas where he showed potential.

In 1921, Neumann finished his education at the gymnasium. Despite his desire to study mathematics, his father persuaded him to pursue chemical engineering because it offered more opportunities. In 1921, he enrolled at the University of Berlin for a two-year chemistry course with that goal in mind.
Simultaneously, he enrolled in mathematics classes at the University of Budapest, but did not attend any of them. He’s published two big mathematical articles recently.

In 1922, he published his first paper, which he co-wrote with Fekete, an assistant professor at the University of Budapest who had been coaching him. In 1923, he published his second paper. In it, he defined the term ordinal number, which is still in use today. Neumann enrolled in the Eidgenössische Technische Hochschule Zürich to study chemical engineering in 1923, after finishing the two-year degree in Berlin. He also graduated from the University of Budapest with honors at some point during this time.

Following that, he began his doctoral work in mathematics at Pázmány Péter University in Budapest, while also studying chemical engineering at ETH Zurich. He graduated from ETH Zurich in 1926. He obtained his PhD from Pázmány Péter not long after that. Cantor’s set theory was axiomatized in his dissertation.
On a Rockefeller Foundation grant, Neumann went to the University of Göttingen to study mathematics under David Hilbert. He finished his habilitation on December 13, 1927. He had produced twelve key works in mathematics by that time.

Neumann began his academic career as a privatdozent at the University of Berlin in 1928. ‘ZurTheorie der Gesellschaftsspiele’ (On the Theory of Parlor Games), an important paper in the field of game theory, was published the same year. He continued to collaborate with Hilbert throughout. The work culminated in the publication of his first major book, ‘The Mathematical Foundations of Quantum Mechanics,’ in 1932.

Neumann moved to the University of Hamburg as a privatdozent in 1929 because it provided him with a greater opportunity to become a tenured professor. He did not, however, stay there for long.
He was invited to give a lecture on quantum theory at Princeton University in New Jersey, USA, in October 1929. He accepted the offer, but because he was engaged, he first went to Budapest to finish the wedding ceremony before moving to the United States with his wife.

Princeton University in the United States of America

Neumann began teaching at Princeton University as a visiting lecturer in 1930. He’s been working on the theory of rings of operators for a while now, with the goal of producing a mathematical technique that may be applied to quantum phenomena. It took nearly a decade to complete the study, which is today known as ‘von Neumann algebras.’ He was promoted to full professor in 1931. He then began writing a series of publications in which he made semi-ergodic theory’s foundational contributions.

However, as a mathematics professor, he was not well-liked by his students. This was because they couldn’t keep up with him and couldn’t follow his erratic thought patterns. He scribbled too hastily and rubbed it out before his classmates had a chance to replicate it. He, on the other hand, was far better at communicating difficult scientific concepts. His students always returned from his lectures with the impression that the problem was actually quite simple.

Princeton’s Institute of Advanced Study was founded in 1933. Neumann was one of the institute’s six founding Professors of Mathematics, a position he held for the rest of his life. He also became co-editor of the ‘Annals of Mathematics’ in the same year. He used to return to Germany every summer until 1933, where he kept his academic position. However, with the emergence of the Nazis in Germany, he decided to resign and relocate to Princeton permanently.

He became a co-editor of ‘Compositio Mathematica’ in 1935. He was also the co-editor of Annals of Mathematics at the same time, a post he kept until his death. mHe was naturalized as a citizen of the United States of America in 1937. He also anglicized his name to John and added von Neumann as a token of German nobility at this time.
Von Neumann focused on the Lattice Theory from 1937 to 1939, providing an abstract investigation of dimension in supplemented modular topological lattices and later establishing the subject of continuous geometry based on it.

By the late 1930s, von Neumann had gained an expertise in explosives and had established himself as the main authority on shaped charge mathematics. He later decided to join the United States Army as the Second World War began, but was turned down due to his age.
Instead, he was asked to work as a consultant on a number of military projects due to his skill in the mathematics of shaped charges. He was then recruited to join the Manhattan Project in late 1943.
Neumann spent much of his time in Manhattan working on the explosive lenses that compress the plutonium core of the ‘Fat Man,’ the nuclear bomb that was detonated on Nagasaki. He not only came up with the idea, but also helped with the design. Neumann was afterwards inducted into the committee that was formed to choose the target cities.
He also oversaw estimates relating to the bomb detonation’s impact, such as the predicted size of the blast, expected death tolls, and the distance at which the bomb should be designated for greatest effect, among other things.

Neumann began working as a consultant for the government and industry in the postwar period. In reality, he began this effort long before the war ended. In 1944, for example, he collaborated with the US Army on the construction of the hard-wired ENIAC computer, giving crucial ideas.
Later, he served as a consultant for the RAND Corporation, a think firm tasked with advising the US Air Force on nuclear policy. In this position, he advocated for the development of hydrogen bombs. He also called for a nuclear strike to destroy the Soviet Union’s nuclear capacity about 1950.
Neumann was elected to the Atomic Energy Commission in 1954. He remained in that position until 1956. During this time, he worked for President Dwight D. Eisenhower’s administration to develop nuclear deterrent policy.

Von Neumann is the creator of several theories, including Ergodic Theory, Operator Theory, Lattice Theory, Game Theory, and Measure Theory, as well as continuous geometry and the Von Neumann Algebras.
Neumann’s most important work is ‘Theory of Games and Economic Behavior,’ which he co-authored with economist Oskar Morgenstern. The book, which was released in 1944, is credited with establishing the interdisciplinary subject of game theory study. The work was based on Neumann’s research paper ‘On the Theory of Parlor Games,’ which was published in 1928.

Von Neumann married Mariette Kövesi, a Budapest University economics student, on January 1, 1930. They moved to the United States of America shortly after, when their only child, Marina von Neumann Whitman, was born. In 1937, the couple divorced.
Marina went on to become a well-known economist. She is now a Professor of Business Administration and Public Policy at the Ross School of Business and the Gerald R. Ford School of Public Policy at the University of Michigan.

Von Neumann married Klara Dan, a scientist and pioneering computer programmer, in October 1938. There were no offspring for the couple. They were married until 1957, when he died.
Von Neumann was diagnosed with cancer in 1955, and his health swiftly deteriorated. Despite this, he continued to work and advocated applied mathematics in an essay for James Newman’s ‘The World of Mathematics’ in 1956.
Fearing that he would expose military secrets while on medicine, he was given military security throughout his final days. He died at the Walter Reed Army Medical Center in Washington, DC, on February 8, 1957.
Aside from a number of mathematical formulas named after von Neumann, his legacy lives on through a number of awards and lectures named after him.
Von Neumann is also the name of a lunar impact crater located on the far side of the Moon in the northern hemisphere.
He was featured on a 37-cent self-adhesive US postage stamp issued by the US Postal Service in 2005.

Unlike most mathematicians, von Neumann preferred to work in noisy environments such as living rooms and cafes rather than in his quiet study. He was a big socialite who kept his guests amused at home on a regular basis.