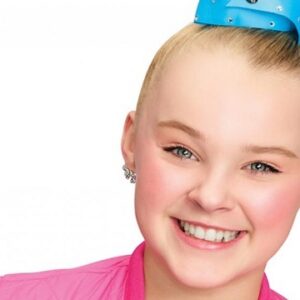 Jojo Siwa, also known as Joelle Joanie Siwa, is a dancer, actor, and singer from the United States. She was the youngest contender in the second series of Abby’s Ultimate Dance Competition, and she rose to fame after appearing on Dance Moms in the fifth and sixth seasons. She has also appeared as a guest artist in Nickelodeon’s Not-So-Valentine Special sketches. Boomerang, her first song, became viral on YouTube and earned her the RIAA: Gold awards. Her songs are both motivating and loud in their condemnation of internet bullying. She is also a successful entrepreneur who sells her clothing and accessories in both retail and online outlets. Jojo Siwa got a book deal with iReach/Amulet Books, and JoJo’s Guide to Sweet Life was published. Her book details her upbeat outlook on life and how she overcame the negative aspects of social networking. The book went on to become a New York Times best-seller!

Jojo Siwa began dancing at the age of five, initially at her mother’s dance studio. Her skill was first recognized when she competed in AUDC (Abby’s Ultimate Dance Competition) as the youngest of the group, where she placed among the top five finalists but was removed after only a week.

JoJo Siwa didn’t give up and began auditioning for Abby Lee Miller’s ALDC, which she was chosen for in 2015. Simultaneously in 2015-2016, Jojo Siwa and her mother began appearing on the reality show Dance Moms for the fifth and sixth seasons, eventually winning the show. She was chosen for Abby Lee Dance Company’s elite team, replacing Chloe, while performing in this production.

In 2016, JoJo Siwa appeared in Make It Pop, Bizardvark (Disney Channel), and The Thundermans as a guest star. Later, she signed a contract with Nickelodeon to perform on their network. She got the Industry Dance Award for Favorite Dancer in the 17-year-old age group category in 2016.

JoJo Siwa’s debut song video upload on YouTube, I Can Make U Dance, was a huge hit, and her single Boomerang was a huge hit as well. She raises her voice against all of the bad comments aired on social media in this song. JoJo Siwa goes on to say that instead of listening to the critics, one should bounce back with a bang and achieve one’s goals.

JoJo Siwa’s trademark colorful bows and accessories became a fashion trend as she grew in popularity. Tilt Dancewear (store) introduced her exclusive Jo Jo Collection (Dancewear) in 2013, and Claire’s struck a commercial contract with her in 2016. In their boutiques, she now has her own JoJo bow collection.

JoJo Siwa has a huge social media following, with over 12 million YouTube subscribers and over 10.8 million Instagram followers.

She was named Favourite Viral Music Artist of 2017 by Nickelodeon Kids’ Choice.

Certain schools in the United States have prohibited their kids from wearing JoJo Siwa’s bright bows. According to the Pioneer, school officials deemed these to be rude, gigantic, and in violation of the uniform code. Many supporters of Jacob Sartorius claimed that JoJo Siwa had manipulated and paid to win the Nickelodeon Kid’s Choice Awards, which sparked a recent scandal.

Jojo Siwa was born in Omaha, Nebraska, on May 19, 2003, to Tom and Jessalynn Siwa. Tom, her father, is a chiropractor at Northwest Chiropractic, and Jessalynn, her mother, owns a dancing studio. Her mother is a huge supporter and has appeared on various reality series with her.

Her natural hair color is brown, although she has bleached it since she was a toddler.

Jojo Siwa claims that her mum makes the majority of her bows. Jayden Siwa, her older brother, is an Instagram sensation and celebrity dancer. �

In 2020, JoJo Siwa was rumored to be dating Mark Bontempo. She confirmed that she is lesbian in January 2021, as well as mentioning her girlfriend, Kylie.

JoJo Siwa has a net worth of $20 million.