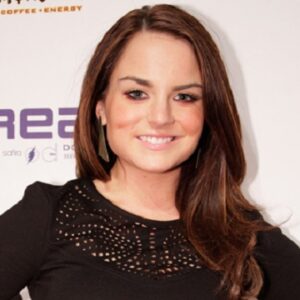 Joanna Noelle Blagden Levesque, better known by her stage name JoJo, is an American singer, songwriter, and actor from Massachusetts. She started her brilliant career as a young performer, appearing in theaters and on television shows. She rocketed to popularity on the sets of ‘America’s Most Talented Kids,’ where she was blessed with stunning beauty and a wide vocal range. When she was thirteen, she topped the Billboard Pop Songs chart and became the youngest person to ever reach the top of the Billboard 200. Her enthusiasm for music was first expressed in her self-titled debut album, which was followed by her second album, ‘The High Road,’ and two mixtapes. Several aspiring young artists have cited JoJo as an inspiration. The star vocalist jumped into the television and film industries, continuing to spit out chart-topping hits until her career was cut short due to a dispute with her record label. Audiences questioned whether she would be able to maintain her dominance in the industry, but she triumphed over all odds, and with her most recent comeback releases, EP ‘III’ and album ‘Mad Love,’ she has reclaimed her place among the music industry’s elite, proving to the industry that she is here to stay.

JoJo was born on December 20, 1990, in Foxboro, Massachusetts, on the outskirts of Boston. Diana’s mother was a church choir singer who also performed in music theaters. Her father, on the other hand, had no formal musical training but was a music enthusiast.

She grew up listening to her mother rehearse hymns and listening to R&B music on the radio since she was two years old. Even before she started speaking in full sentences, she would sing nursery songs with a cheerful twist.

JoJo learned to sing by emulating her mother’s vibrato, pitch, and range because she never received any formal vocal training. However, things did not go well for her when her parents split when she was four, and she was forced to move into a one-room apartment with her mother.

Her mother, who was struggling to make ends meet, began cleaning at various locations to supplement her income and provide the best she could for her daughter. JoJo, on the other hand, felt left out at school in comparison to the other students.

She began performing in theaters when she was six years old, and in search of new ways to express herself, she auditioned for ‘Kids Say the Darndest Things: On the Road in Boston.’ She was cast on the show right away, and she worked alongside Bill Cosby.

She rose to fame after performing on ‘Destination Stardom,’ where she performed ‘Respect’ and ‘Chain of Fools,’ and then received a call to sing on ‘The Oprah Winfrey Show.’ She even had an appearance on the television sitcom ‘Maury.’

She became famous after enrolling as a participant on NBC’s “America’s Most Talented Kids.” However, she was defeated by Diana DeGarmo in the competition.

She auditioned for ‘Blackground Records’ the same year after Vincent Herbert insisted she do so. She pleased the producer with her vocal skill and was immediately signed on.

She started working on her record in 2003. Her debut hit, “Leave (Get Out),” was certified gold by the Recording Industry Association of America the following year. Prior to the release of her record, she had a tour planned.

Her debut album, ‘JoJo,’ debuted at number four on the Billboard 200 and sold over 95 thousand copies in its first week. Her second song, ‘Baby It’s You feat. Bow Wow,’ was certified gold by the RIAA and charted at number 22 in the United States.

She performed at a charity event in 2005 for the victims of the Asian Tsunami and Hurricane Katrina. She also served as the emcee and performer at the ‘City of Hope National Medical Center.’

She hosted the pre-Grammy Awards countdown program in 2006. Her abilities as a host were now widely recognized by producers and casting directors, and she received numerous television offers, including the role of ‘Zoe’ in ‘Hannah Montana,’ which she turned down because acting was not her top objective.

She soon found herself in the television and film industry after a successful career in music. In the 2006 film ‘Aquamarine,’ she played ‘Hailey,’ and in the comic drama ‘RV,’ she co-starred with Robin Williams. Both films were box office smashes.

Her second album, ‘The High Road,’ was released in October 2006 and received favorable reviews.
The album debuted at number three on the Billboard 200 in the United States.

‘Too Little Too Late,’ her debut single off the album, went from number 66 to number 3 on the charts, making it the largest climb in music history. The album’s next two singles, ‘How to Touch a Girl’ and ‘Anything,’ didn’t make it to the top of the charts, but they showed a lot of potential.

She began working on her third album in 2008, and by 2009, it was finished and ready for distribution, when disaster struck, and the tracks from her upcoming album were leaked on ‘YouTube.’

Her career took a hit as a result of this, and she filed a lawsuit against ‘Blackground Records,’ accusing them of sabotaging her career. She demanded $500K from the label as compensation for her loss.

In 2009, the disagreement was finally settled out of court, and her third album was due to be released under the Interscope Records label. The release, however, did not take place.

According to JoJo, the fallout with her label was the most hard point of her career, and it took her a long time to get back on her feet.

The Queen of Comebacks

She released a mixtape, ‘Can’t Take That Away from Me,’ in 2010 because she didn’t want to keep her fans waiting for an album. ‘In the Dark,’ her debut single from the mixtape, was a subtle clue that she was back in the game.

‘Disaster,’ her other song, was published on stations in the middle of the year. Despite significant criticism, it managed to land at number 87 on the United States billboard.

She opened for the ‘Joe Jonas & Jay Sean Tour’ because she felt the need to elevate her performances, and this helped her get the attention she deserved.

‘Agape,’ her second mixtape, was released in 2012. Soon after, her singles ‘We Get By’ and ‘Andre’ were released, and the mixtape garnered great reviews, portraying her as a confident pop musician.

In 2013, she sued ‘Da Family’ and ‘Blackground Records’ for the second time. The label had to pay for her forfeiture since the damage to her career was “irreparable.”

She also sought that she be released from an illegitimate contract she signed while she was a minor, which had tied her to the label for more than seven years.

She obtained a deal with ‘Atlantic Records’ after another out-of-court settlement. She followed up with an Extended Play titled ‘III’ and three songs titled ‘When Love Hurts,’ ‘Save My Soul,’ and ‘Say Love.’

Her third album, ‘Mad Love,’ was released in October 2016, two months after her first single, ‘Fuck Apologies,’ was published. The song was written to send a powerful message to those who tried to stop her from succeeding.

Her album debuted at number six on the Billboard 200, solidifying her status in the music industry after nearly a decade of hardship and underlining her previous triumphs.

Her involvement in the 2003 show ‘America’s Most Talented Kids,’ which featured performers under the age of fifteen, was her break into the music industry. She landed a deal with ‘Blackground Records’ after the performance and released two hit albums that were certified gold by the RIAA.

For music fans, her song “Leave (Get Out)” was a revelation. With the song reaching number one on the US music charts, it ushered in a new era of young talent. MTV’s ‘Total Request Live’ included it as the most requested video.

Her most recent album, ‘Mad Love,’ has cemented her place in the business, and has been dubbed one of the best comeback albums of all time. Her album peaked at number six on the US music charts in 2016.

She was nominated in the category of ‘Best New Artist’ at the ‘2004 MTV Video Music Awards,’ making her the youngest person ever to be nominated in that category.

She lived with her mother in New Jersey until she was 18 years old. She eventually moved out and now lives in Los Angeles. She was invited to Northeastern University after high school, but she preferred to focus on her job instead.

She is a philanthropist who has donated to organizations such as the ‘Make a Wish Foundation,’ ‘World Vision,’ and ‘She’s the First,’ among others. She is a dedicated volunteer who has performed for free at charity events to raise donations.

After meeting on MTV’s ‘Fake ID Club,’ she began dating footballer Freddy Adu in 2005. They split up the following year, but remained close friends.

JoJo has a $7 million net worth as an American R&B/pop singer-songwriter and actor.

JoJo had her first record deal when she was six years old. Her mother, on the other hand, declined the offer, claiming that JoJo was too young to start working.