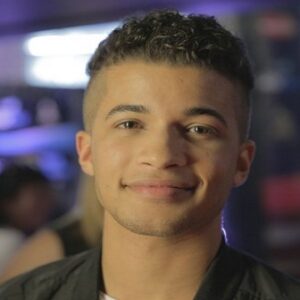 Jordan Fisher is an actor, dancer, singer, composer, and multi-instrumentalist from the United States who rose to prominence after acting in a number of television episodes and films. He began as a ‘king of almost,’ according to him, making it to the top two during auditions before losing the position to the other individual. However, in his brief career, he has already established himself as an entertainer. He rose to prominence after playing Jacob on the ABC sitcom “The Secret Life of the American Teenager.” He landed roles in a number of musicals where he sang on-screen, demonstrating his versatility as an actor and singer. In the TV show ‘Liv and Maddie,’ he delivered two versions of a song. In the telefilm ‘Teen Beach 2,’ he contributed vocals to five tracks. With his two songs from ‘Grease: Live,’ he enchanted the audience. After that, he signed with Hollywood Records and released his self-titled EP. On a personal level, Fisher’s life has been impacted by the struggles he endured as a child, and his family refers to him as a “old soul” because of his maturity. As part of Disney’s charitable group ‘VoluntEARS,’ he has been interested in philanthropy.

Jordan Fisher was born in Birmingham, Alabama, on April 24, 1994. He was born to a 16-year-old teen mother. Rodney and Pat Fisher, his maternal grandparents, legally adopted him and reared him as their son.
His biological mother, who has struggled with substance abuse, has no contact with him. Cory and Trinity, his two younger siblings, were also adopted by their grandparents.

He began gymnastics instruction at the age of two and began acting, dancing, and singing training at the age of ten. He turned down the option to travel to Texas to train for the Beijing Olympics in favor of pursuing a career in musical theater.

Fisher, who was homeschooled, graduated from Harvest Christian Academy with a high school diploma. He took computer studies at Jacksonville State University for his collegiate degree.

After being cast in a school performance of ‘School House Rock, Jr.’ at Paine Intermediate School in Trussville while he was in fifth grade, he began performing on stage. His performance of ‘Conjunction Junction’ so pleased his theatre teacher that he was referred to Red Mountain Theatre Company’s youth program. During this period, he also appeared at Birmingham Children’s Theatre.

Lynne Marks, a Los Angeles-based talent scout who lectured at RMTC’s programs, offered him a contract when he was ten years old. Fisher finally signed the contract in 2008, following a three-year wait, and began auditioning for roles in Birmingham and Los Angeles.

Jordan Fisher came close to being chosen a few times during his initial auditions. He was cast in guest parts on television episodes such as ‘The Hustler,’ ‘iCarly,’ and ‘Skyrunners Testimonials’ in 2009.
He earned the lead part of Jacob in ABC’s teen drama ‘The Secret Life of the American Teenager’ in 2011. Soon after, he and his maternal grandmother, Pat Fisher, relocated to Los Angeles to pursue acting full-time.

In 2015, he was cast in the recurring role of Holden Dippledorf on Disney’s ‘Liv and Maddie.’ Over the course of two seasons, he played the character in 11 episodes.
‘Grease: Live,’ a live television remake of the 1971 musical ‘Grease,’ cast him as Doody in 2016. In the telefilm, he also sang a few of songs. He returned to the stage in November to perform in the Broadway production of ‘Hamilton.’

A music supervisor arranged up a meeting with the program director for Radio Disney after hearing Jordan Fisher play the piano and sing while promoting the film “Teen Beach Movie.” ‘By Your Side,’ his first single, was released in 2014, followed by ‘Never Dance Alone,’ and ‘What I Got,’ two additional pop-soul songs.

In 2015, he performed a cover of the song “Do You Want to Build a Snowman?” from the film “Frozen” with Disney Channel Circle of Stars. On the TV show ‘Liv and Maddie,’ he sang two versions of the song ‘True Love.’
Fisher sung a variety of songs for the film ‘Teen Beach 2’, which she starred in in 2015. He sang the solo ‘Wanna Be With You’ and the duet ‘Fallin’ For Ya’ in addition to giving vocals to three tunes.

Hollywood Records signed him to a record deal in 2015. ‘Counterfeit,’ his debut single from the label, was released on February 1, 2016. He debuted the track ‘All About Us’ on April 15, 2016, which was later featured in his self-titled first EP, which was published on August 19, 2016. He also appeared on Olivia Holt’s self-titled debut EP’s hit “Thin Air.”

In the film ‘Grease: Live,’ he had two songs, one of which, ‘Those Magic Changes,’ became a highlight of the show, winning him critical acclaim. In the animated Disney picture ‘Moana,’ he sang the end-credits duet ‘You’re Welcome’ with Lin-Manuel Miranda.

Jordan Fisher’s first major television role was in ‘The Secret Life of the American Teenager.’ It helped him gain notoriety and led to him appearing in a number of other TV shows and movies.
He is most known for his roles as the surfer gang leader Seacat in the films ‘Teen Beach Movie’ and ‘Teen Beach 2’. The first was the second-highest-rated Disney Channel Original Movie, while the second was the most-watched DCOM since its precursor.

Jordan Fisher was nominated for a ‘Teen Choice Award’ in 2015 for his tracks in ‘Teen Beach 2’. He and his co-stars were nominated for ‘Choice Music: Song from a Movie or TV Show.’

Jordan Fisher relocated to California with his grandma in 2011 and was followed in 2015 by his grandfather and brothers. In an interview, he expressed his joy at being reunited with his entire family. He also admitted to having a multi-ethnic background.

Jоrdаn has an estimated net worth of $800 million as of January 2022. He made the majority of his money via several sales and television appearances.

Jordan Fisher is most often seen playing the guitar or the piano as a musician. He can, however, play six other instruments in all, including bass, harmonica, French horn, and drums.
He enjoys video games and did voice over and motion capture for the game ‘Until Dawn’ in 2015.