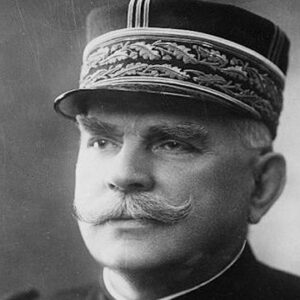 During World War I, Marshal Joseph Jacques Cesaire Joffre commanded the French Army. He was honored for his outstanding performance at the First Battle of the Marne, when the French Army defeated the Germans. His adept use of military techniques on the battlefield earned him the moniker “Papa Joffre.” He demonstrated his leadership abilities by commanding a military force during the Paris Uprising after joining the French Army at a young age. He was stationed in Indo-China and then North Africa. When he was the Director of Engineers, he demonstrated his organizational abilities. During World War I, he gained a reputation for favoring offensive strategy over defensive tactics. His temperament was distinct in that he knew how to keep a cool demeanor even under the relentless pressure and tragedy of war. That is why he was given the moniker “Gandpere” by the French Army soldiers. When the French were defeated at Verdun, he received harsh criticism for his poor military tactics. Despite his several failures, he maintained his popularity and rose to the position of Marshal of France.

Joseph Joffre was the eldest of eleven children born to a provincial cooper in Rivesaltes, Roussillon, France. He received his bachelor’s degree in mathematics with honors from the college of Perpignan.

From 1870 to 1871, he began his military career by defending Paris during the Franco-Prussian War. He was a key figure in the Keelung Campaign during the Sino-French War, which lasted from 1884 to 1885.

He was in charge of military control of Formosa in 1885. He afterward spent three years as the chief of engineers in Hanoi. In 1892, he was assigned to build a railway in Senegal as part of his military duties.

Joffre led the French Army to victory in the attack on Timbuktu. He created the Diego-Suarez naval base after his move to Madagascar in 1897. He was promoted to Colonel as a result of his hard work and efforts.
He returned to France in 1903 and assumed command of the Thirteenth Brigade. After three years, he was assigned to the command of the Sixth Division. He was in charge of commanding the Second Corps at Amiens in 1908.

He successfully implemented Plan XVII, a military concept devised by General Ferdinand Foch to protect France against Germany, during the early battles of World War I.

He became a national hero after the French Army’s victory in the First Battle of Marne. He was named Commander-in-Chief of the French Army for his outstanding performance in this fight.

After a disagreement with the minister of war Joseph Gallieni about Joffre’s failure on the fortification of Verdun, he was replaced by Gen. Robert Georges Nivelle in 1916. He was appointed Marshal of France despite his defeat at Verdun.

In 1918, he was chosen as the leader of the Supreme War Council during his time in the United States. He was discharged from the military the following year. He became a member of the Academie Francaise after his retirement.

After receiving repeated warnings from French general Charles Lanrezac about German cavalry observed near Dinant on the Meuse during the Battle of the Frontiers in 1914, he issued Instruction Particuliere No. 10.

He was convinced that the British and Belgians could hold off the German cavalry. The French Third and Fourth Armies were preparing to strike into the Ardennes as part of his instructions.
Unfortunately, because of his erroneous tactical tactics, the German forces drove the French and British to retreat towards the Marne, east of Paris.

He effectively utilized his tactical tactics at the First Battle of Marne in 1914 by issuing Instruction Generale No. 4. Gallieni, the Military Governor of Paris, was given command of the Sixth Army as part of his order.

He organized a new horse corps under Conneaut to bridge the gap between the Fifth Army and the BEF in order to strengthen the French Army. To secure victory in the fight, he replaced some unsuccessful generals with formidable military figures such as Franchet d’Esperey, Foch, and others.

He skillfully handled the French army divisions and successfully supervised artillery ammunition supplies at the time by maintaining calm under the relentless pressure of battle.

He launched a series of failed offensives against German positions in Champagne and Artois in 1915. He prioritized his offensives and removed the majority of the heavy guns from the bastion of Verdun, despite the French Army’s feeble defense.

Following his wife’s death, he declared his willingness to accept a transfer to Indochina. He has a little girl.
He died in Paris and was buried on his estate at Louveciennes, which is located in north-central France.

Joffre cake was produced in honor of this great military personality during his visit to Romania in 1920 by Casa Capsa, one of Bucharest’s most known restaurants. This cake consisted solely of chocolate buttermilk layers.