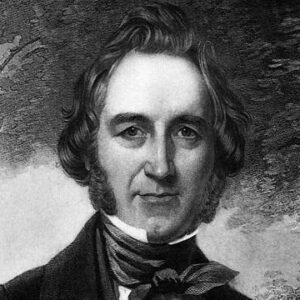 Joseph Paxton was an English gardener and architect who is most known for designing the Crystal Palace, one of the most renowned structures of Queen Victoria’s reign. Born in England to a farming family, he worked a variety of horticultural positions before beginning employment at Chiswick Grounds of the Horticultural Society, close to the Duke of Devonshire’s gardens. Paxton successfully designed gardens, fountains, a model village, and an arboretum at Chatsworth House, the enormous rural estate of the Devonshire family in Derbyshire, where he was named chief gardener by the Duke. He also married Sarah Bown, the niece of the housekeeper of Chatsworth. His moment of glory came with the 1851 Great Exhibition, for which he created a magnificent design for the Crystal Palace, the principal hall in Hyde Park. His amazing proposal was innovative in its modular, prefabricated construction and liberal use of glass. The hall, constructed in six months by 2,000 workers, was a tremendous success, and Paxton was knighted by Queen Victoria as a result. In addition to his position as a chief gardener at Chatsworth, Paxton later worked on the layout of public parks and assisted in the construction of a number of country mansions, among other tasks. Subsequently, he became wealthy from successful speculation in the burgeoning railway business and sat in Parliament until his death.

Joseph Paxton was born on August 3, 1803, to a farming family in Milton Bryan, Bedfordshire. He was the eighth child of a farmer-yeoman.

At age 15, he began working as a garden boy for Sir Gregory Osborne Page-Turner at Battlesden Park, close to Woburn. In 1823, he secured a post at the Horticultural Society’s Chiswick Gardens after working in various gardens.

Due to the proximity of the Horticultural Society’s gardens to those of William Cavendish, 6th Duke of Devonshire, Paxton met Duke, who was impressed by Paxton’s work. Paxton enthusiastically accepted the position of Head Gardener at Chatsworth, which he was offered by the man.

Paxton began developing conservatories at Chatsworth utilizing the ridge-and-furrow style of glazed roofs, a technology created by Loudon in 1817, in addition to his duties as head gardener in 1831.
Between 1836 and 1840, he constructed the ‘Great Stove’ conservatory at Chatsworth, which at the time was the largest glass structure in the world.

Subsequently, he developed the largest glass house in Europe, which was constructed completely of glass sheets. The curved ridge-and-furrow glazed wood roof was supported by arched laminated-timber frames, cast-iron columns, and side arches above the aisles.

Using a variety of styles, he designed the community of Edensor near Chatsworth between 1838 and 1848. He also designed public parks in Liverpool, Glasgow, Halifax, and Birkenhead Park, the last of the earliest English public parks. At 280 feet in height, the ’emperor fountain’ he erected was the tallest in Europe.

Throughout the 1840s, he worked on landscape gardening and the design of public parks. He also developed several rural homes and other residential structures.
In 1849–1850, Paxton erected a special conservatory for the large-leaved ‘Victoria Regia lily, the first time this alien species bloomed in England.

The structural innovations of the lily-house contributed to Paxton’s most influential building, The Crystal Palace, which held the “Great Exhibition of the Works of All Nations” in London. Paxton planned and constructed the hall between 1850 and 1851, drawing on his experience with greenhouses at Chatsworth.

The Crystal Palace was exceptional for numerous reasons; it was constructed so that all of its components could be prefabricated, assembled, and disassembled off-site. It was the first example of a massively industrialized structure and its construction took just over six months.

From 1852 to 1854, he designed the well-regarded gardens adjacent to the reconstructed and enlarged Crystal Palace in Sydenham, South London. During this period, Paxton also contributed to the design of Mentmore Towers, Bucks, and a lavish Jacobethan-style country mansion for the Rothschilds.

Between 1850 and 1858, he made substantial modifications to the Lismore Castle, County Waterford, Ireland, belonging to the Devonshires. He also created the French Renaissance-style mansion and grounds at Ferrières, near Paris.
Paxton also represented Coventry in Parliament from 1854 until his death.

The “Crystal Palace” for the “Great Exhibition” of 1851 was Paxton’s most exquisite achievement. In under six months, the skyscraper was constructed using 293,655 panes of glass, 330 massive iron columns, and 24 kilometers of gutters.

In addition, he designed the Great Conservatory or Stove, a massive greenhouse, and a lily house for a big lily with a pattern based on the leaves of the plant.

Queen Victoria honored him for his stunning design of “The Crystal Palace.”

Paxton married Sarah Bown, the niece of the Chatsworth housekeeper, whom he met on his first day of work at Chatsworth, in 1827.

Joseph Paxton passed away at his home in Rockhill’s, Sydenham, on June 8, 1865. His wife lived in the Chatsworth Estate residence until her death in 1871.

James is one of the wealthiest and most popular actors in the world. According to our research, Wikipedia, Forbes, and Business Insider, James Paxton has an estimated net worth of $1.5 million.