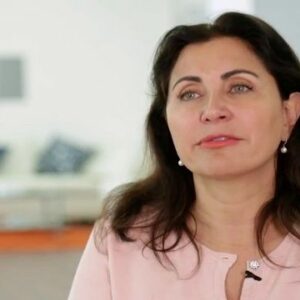 Fetchr, a Silicon Valley-backed technology company based in Dubai that seeks to address the “no-address” issue impeding growth in emerging markets, particularly in the Middle East, is co-founded by Joy Ajlouny. The business has developed patented technology that enables customers to use the GPS location of their mobile phone as their address. She has worked tirelessly at Fetchr, doing “everything from washing dishes to wearing a baseball cap in the warehouse training the drivers on customer service,” according to the company. In the eyes of the public, she is solely responsible for running the business. She had previously founded the discount clothing store Joy’s and the online shopping platform Bonfaire for designer clothing, shoes, and accessories. Moda Operandi later purchased Bonfaire. She wants to be remembered as a role model for young women who did “something more than perfectly outlining her lips”. Her advice for aspiring business owners, particularly female ones, is to be persistent because, in her opinion, they will constantly hear how bad their ideas are from others and need to learn not to accept rejection as an answer.

Joy Ajlouny, a Palestinian-American woman who grew up in a business family in the US, recalls attending “endless breakfasts” where everyone read the New York Times while debating current affairs and business strategies. She believes she hails from a highly serious family that “never talked about sports and unimportant stuff” and was always engaged in business and politics.

She claimed that, like the majority of Palestinian refugee families, she was born with the mindset that success can be achieved by hard effort and a solid education, therefore studying finance in college came naturally to her. She received her BBA in Finance and Economics from George Washington University, where she also attended.

Joy Ajlouny has a background in finance and business, but she has always had a fascination for fashion. She made the decision to mix e-commerce and fashion, and she started out in the industry.

One of her first jobs was at Fox’s, an East Coast retail chain with sixteen locations that sells discounted designer goods for women. She initially started working for the retail company in the dressing room of a clothes store, which she described as “not fun at all.”

She quickly advanced and was given the opportunity to become a Senior Buyer, a post she held from 1987 until 1990. Her duties there included choosing products and spotting new brands, creating merchandising plans by monitoring customer purchasing and product movement trends, establishing close bonds with important suppliers, and promoting increases in sales margins.

She established her own regional network of women’s off-price designer clothes, Joy’s, with headquarters in New York in 1991. She oversaw 20 workers up until May 2002, directed all merchandising, product development, design, and distribution operations, and built and maintained connections with Middle Eastern merchants and buyers.

She started Bonfire, an online marketplace for designer clothing and accessories, in November 2011. It was an accessories-only platform for up-and-coming designers that offered a blank area for affluent buyers looking for unusual ideas.

She not only secured Series A funding for the company from prominent Silicon Valley venture capitalists but also put together a productive and efficient merchandising staff and created and carried out smart marketing strategies. In 2013, she was successful in securing an acquisition contract from Moda Operandi thanks to monthly sales revenue increases of 20–45%.

She had seen while working in the US e-commerce sector that although Middle Eastern clients frequently placed larger orders, many of them were sent back by the courier with a “no address” tag. Idriss Al Rifai, who she met in Silicon Valley while he was pitching to venture capitalists, was also aware of the problem in the area because he had worked for the Dubai-based e-commerce firm Markavip.

The technology underpinning Fetchr was created by Al Rifai and a group of engineers, and it quickly pleased Ajlouny, who joined him as a co-founder of the Dubai-based business Fetchr in 2013. Her suggestion that GPS could be utilized similarly to Uber to contact a consumer directly without the requirement for an address was quickly adopted.

She was able to get Series A finance for the startup in 2015 totaling $11 million thanks to her connections in Silicon Valley, the largest sum a company in the area had so far managed to raise. A few months later, she received an unknown sum from Mobily Ventures and an additional $41 million in 2016, bringing her total funding to date to 52 million U.S.

She is known for her sense of humor, and she wants the Fetchr brand to reflect that. Every Wednesday, she holds comedy sketch workshops for her staff. She places a high value on accessibility since she wants the brand to connect successfully with its audience.

She was initially interested in a similar outcome for Fetchr given her successful sale of Bonfire, stating that “a nice purchase or an IPO, whichever comes first” would be acceptable. But right now, she wants to take the business public.

Joy Ajlouny made business history when she successfully raised $11 million from one of Silicon Valley’s top venture capital firms for a start-up company in the Middle East. She claims that this is not only her greatest achievement as an Arab woman but also as a woman in general, because “only 1% of all women have ever done that.”

In support of her startup firm Fetchr, which was ranked as the top startup in the Middle East, Joy Ajlouny made an appearance on the cover of the Middle Eastern edition of “Forbes” magazine.
She received the “Stars of Business Leadership Award All-Round Excellence” in 2017 and was selected “Woman of the Year” by “Emirates Woman” in 2016.

Joy Ajlouny, who is unmarried and single, believes that making a difference in the world is crucial in addition to becoming a mother and raising kids. She has vowed to donate all of her life’s earnings to aid refugees because her parents were refugees when she was born.

She stated in an interview that the beginning of her trip was when she was told she wasn’t “smart enough, good enough, gorgeous enough, accomplished enough,” which she was determined to disprove. She also said that when she was younger, she worried too much about what other people thought of her instead of concentrating on her own goals.

She firmly disagrees with the “ridiculous Kim Kardashian generation” of women who are overly preoccupied with how they appear and how many likes they receive on Facebook and Instagram. Instead of focusing on “photoshop photographs” that garner likes on social media, she believes that women should be proud of what they have accomplished in the world.

The estimated net worth of Joy Ajlouny is about $1 million.

Joy Ajlouny operated a lemonade shop on the street when she was eight years old. Even then, she had a risk-taking, entrepreneurial attitude, and she frequently thought of creative ways to make extra money by misrepresenting her goods as being “homemade.”