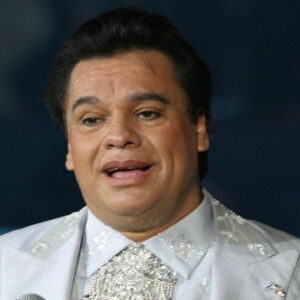 Juan Gabriel was a Mexican singer, songwriter, composer, arranger, producer, and actor whose flamboyant approach helped break down barriers in the Latin music business. He is one of the most successful singer-songwriters in Latin America, with over 200 million copies sold worldwide. It is reported that his nineteenth studio album, ‘Recuerdos, Vol. II,’ which sold over eight million copies, is the best-selling record in the history of Mexico. He is also highly regarded as one of the greatest songwriters and performers in Mexican history. Some of his best songs are ‘Abrázame Muy Fuerte’, ‘Querida’, ‘Hasta Que te Conocí’, ‘Amor Eterno’, ‘El Noa Noa’, ‘Se Me Olvido Otra Vez’, ‘La Frontera’, ‘Siempre en mi mente’, ‘Te lo pido por favor’ and ‘Yo te recuerdo’. Throughout his career, seven of his songs reached number one on the ‘Hot Latin Songs’ chart, out of a total of 31 entries. In addition to his own records, he has served as an arranger, producer, and lyricist for the majority of the most prominent Latin performers of his period, including Roco Decal, Lucha Villa, Lola Beltrán, and Paul Anka.

Alberto Aguilera Valadez was born on January 7, 1950 in Parácuaro, Michoacán as Juan Gabriel. He was the youngest of Gabriel Aguilera Rodrguez and Victoria Valdez Rojas’ 10 children.

His mother relocated to Ciudad Juárez, Chihuahua, and enrolled him in the El Tribunal boarding school after his father was sent to a mental institution while he was still a youngster. During his eight-year stay, he grew close to teacher Juan Contreras and, at age 13, he escaped the boarding school to live with him for a year.

The following year, he moved back home with his mother, and sisters Leonor and Beatriz Berman led him to the local Methodist Church. He began singing in the chorus and assisting with church housekeeping.

In 1965, Alberto Aguilera Valadez performed under the stage name Adán Luna on the Notivisa television program Noches Rancheras. The following year, he began singing live at the Noa-Noa pub.

Although he occasionally performed at other local pubs, he predominantly worked there for the next three years, during which time he composed “El Noa Noa.” Once, he flew to Mexico City in search of recording chances but was unsuccessful.

The next year, he returned to RCA Victor as a backup vocalist. However, he resigned owing to inadequate compensation in 1970 and returned to Juárez.

The following year, he made the third try but was forced to sleep in bus and train terminals due to a lack of funds. After being wrongfully accused of robbery, he was imprisoned for a year and a half.

He continued to compose songs, which attracted the interest of prison warden Andrés Puentes Vargas, who connected him to Mexican singer and actress La Prieta Linda. Eventually, he was released owing to a lack of proof.

With the assistance of La Prieta Linda, Alberto Aguilera Valadez got a recording contract with RCA Victor in 1971. He adopted the theatrical name Juan Gabriel in honor of his late father Gabriel Aguilera and his former tutor Juan Contreras.

In the same year, he released his debut studio album, El Alma Joven…, which included his debut single and first hit, “No Tengo Dinero.” The album was successful and was awarded gold by the Mexican Association of Producers of Phonograms and Videograms (AMPROFON).

At the OTI Festival in 1972, he sang the songs “Será Maana” and “Uno, Dos y Tres (Y Me Da un Beso)” Although the songs were unable to represent Mexico, they earned critical acclaim and were later released on his second album, “El Alma Joven II” (1972).

(He made his acting debut alongside Sara Garcia and Verónica Castro in the 1975 Mexican film Nobleza ranchera. After a few more roles in the years that followed, he took a sabbatical from acting until executive producing and starring in the 2016 Mexican biographical series ‘Hasta Que te conoc’ based on his life.

In the meanwhile, he continued to release one or more studio albums every year, spanning a wide range of musical genres and established himself as Mexico’s foremost commercial singer-songwriter. He also contributed popular songs for other prominent Latin artists, including the ballad “Lo Pasado, Pasado” for José José’s 1978 album of the same name, which brought him international prominence.

His 1984 album ‘Recuerdos, Vol. II’ reportedly sold over eight million copies in Mexico, making it the best-selling record of all time. The album got him a Grammy award for ‘Best Latin Pop Album,’ and its single ‘Querida’ (Darling) topped the Mexican charts for the entire year.

He was the first non-classical performer to appear at the Palacio de Bellas Artes in 1990. The earnings from his three sold-out performances were donated to the National Symphony Orchestra.

Juan Gabriel received three “Billboard Latin Music Awards” in 2002 and three “Latin Grammy Awards” after his death in 2016.
In May of 2002, he received his own star on the “Hollywood Walk of Fame.”

Juan Gabriel was in a long-term relationship with Laura Salas, whom he regarded as “the best friend I have ever had.” She was the mother of Iván, Joan, Hans, and Jean, four of his six children.

His body was cremated and his ashes were interred in his residence in Ciudad Juárez, Chihuahua, after he died of a heart attack in Santa Monica, California, on August 28, 2016.

Mexican musician and songwriter Juan Gabriel has a net worth of $30 million. Juan Gabriel amassed his fortune during the course of a forty-year music and entertainment career. Gabriel had an interest in music at a very young age. At the age of 13, he composed and performed his debut song, “La Muerte del Palomo.”