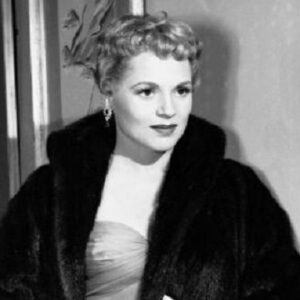 Judy Holliday was a 1940s and 1950s American actress best known for portraying ‘dumb blondes’ with squeaky voices in a number of breezy comedy films. Her film roles belied her inherent intelligence and spirit, which she demonstrated throughout her real life while juggling multiple roles. She had formed a comedy troupe called ‘The Revuers’ with Adolph Green, Betty Comden, Al Hammer, and John Frank prior to moving to Hollywood. Judy Tuvim’s roles with this troupe helped her land bit parts in several films, but it took two Broadway shows for her to achieve Hollywood stardom as Judy Holliday. With her stage adaptation of her role in ‘Born Yesterday’ in George Cukor’s film adaptation of the same name, she was able to win the Academy Award for ‘Best Actress,’ defeating Gloria Swanson for ‘Sunset Boulevard’ and Bette Davis and Anne Baxter for ‘All About Eve’. Throughout the 1950s, she appeared in a handful of Columbia films, where she acted in a variety of roles, utilizing her ‘dumb blonde’ image. Though comedians fared poorly in terms of awards, Judy was able to earn a ‘Oscar’ and a ‘Tony Award’ for her efforts.

Judy Holliday was born Judith Tuvim on June 21, 1921 in New York City, New York, United States of America. She was the only child of Abraham Tuvim, a fundraiser, and Helen Gollomb, a music teacher.
Her parents divorced in 1928, and she was raised in New York City by her mother.

At the age of ten, she received an IQ score of 172 and graduated at the top of her class from ‘Julia Richman High School’ in 1938. After being rejected by the ‘Yale Drama School’ for being too young, she took a job as a switchboard operator at the ‘Mercury Theater’ in 1938 with the hope of becoming a director and playwright.

In 1940, she made her stage debut as a co-founder of a cabaret group called ‘The Revuers,’ which performed at Greenwich Village nightclubs. Additionally, she appeared on a half-hour NBC special titled ‘Fun with the Revuers’.

In 1944, she relocated to Los Angeles with the ‘Revuers’ after being hired by ’20th Century Fox’ to appear in the film ‘Greenwich Village’.

She also appeared in supporting roles in feature films such as ‘Winged Victory’ in the role of ‘Ruth Miller’ in 1944 and ‘Something for the Boys’ in 1945 before the studio dropped her.

Disappointed but not discouraged that the majority of her scenes were cut, she returned to New York and continued her stage career.

She made her Broadway debut in 1945 with ‘Kiss Them for Me,’ in which she played for the first time the role of a dumb blonde, which became her signature act.

In 1946, she made her stage debut when she took over the role of ‘Billie Dawn’ from Jean Arthur in Garson Kanin’s play ‘Born Yesterday’.

In 1949, she lent her voice to a sailor’s date who appeared out of nowhere in the film ‘On The Town.’

In 1949, she returned to film in the supporting role of ‘Doris Attinger’ in Spencer Tracy, Tom Ewell, and Katharine Hepburn’s comedy ‘Adam’s Rib’.

Her breakthrough performance in a film was in ‘Born Yesterday’. Columbia had acquired the film rights to the play and Harry Cohn desired Rita Hayworth to play ‘Billie Dawn’. However, Judy was ultimately cast in the role due to positive reviews for her work in ‘Adam’s Rib’. She won the Academy Award for ‘Best Actress’ for her performance in this film.

In 1951, she returned to Broadway in the lead role of ‘Dream Girl’.

She signed with ‘Columbia’ in 1952 and starred as ‘Florence Keefer’ in the film ‘The Marrying Kind’.

She was summoned before the ‘Un-American Activities Committee’ in 1952, during the McCarthy era, to testify about her political affiliations. Though she was not blacklisted in the same way as many of her peers, her film career suffered a setback, albeit a temporary one. For a time, she had to spend more time on stage than on screen.

In 1954, she starred in ‘It Should Happen to You’ as ‘Gladys Glover’ opposite Jack Lemmon. She appeared as a waitress in ‘Sunday in Town’ and as a guest artist in ‘Fanfare’ the following year.

In 1956, she returned to Broadway in the lead role of the musical ‘Bells Are Ringing.’

Her next film was 1956’s ‘The Solid Gold Cadillac,’ in which she starred as ‘Laura Partridge.’

In 1960, she starred opposite Dean Martin in a film adaptation of the stage play ‘Bells Are Ringing.’ This film is said to be one of her best.

In 1962, she made her final Broadway appearance in the play ‘Hot Spot’.

In 1965, she wrote the music for the musical ‘A Thousand Clowns.’

In 1945, Judy Holliday received the ‘Clarence Derwent Award’ for her supporting role in ‘Kiss Them for Me.

In 1950, she won a ‘Oscar for Best Actress’ for her performance in the film ‘Born Yesterday’.

She is the recipient of a star on the ‘Hollywood Walk of Fame.’

The estimated net worth of Judy Holliday is $7 million.

Despite her early death, Judy Holliday made a lasting impression on the entertainment industry as a ‘dumb blonde’ with an IQ of 172.

She survived the ordeal with the ‘House Committee on Un-American Activities’ by playing dumb intelligently.