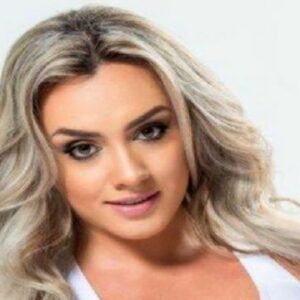 Fitness model, TV host, and social media sensation Juliana Salimeni, also known as Juju, is from Brazil. She rose to fame in 2008 after accepting a reporting position for the television program “Panic on TV.” She gained widespread acclaim very fast in Brazil and was promoted to serve as the show’s principal presenter, “Panic Delivery.” She then began appearing on the covers of other well-known publications, including the renowned lifestyle and entertainment publication “Playboy.” Juju teamed up with a variety of international fitness brands after being awarded the “Sexiest Woman in the World” by “VIP” magazine. Juju rose to fame in Brazil as a result of her partnerships with leading fitness brands. She has a sizable social media fan base. The number of followers on her official Instagram account is above 12 million. She has made appearances in videos on her “YouTube” channel, including “Tour Pela Clinica Salimeni.”

On September 24, 1986, in So Paulo, Brazil, Juju Salimeni was born. Dora Salimeni, Juju’s mother, raised her. She competed in a variety of activities during her time in school, including gymnastics, soccer, and volleyball.
She graduated with a bachelor’s degree in business administration from the “Fátima Toledo School.” Despite having a slender figure due to her love in sports, Juju was nonetheless unhappy.

She desired to appear better. This motivated her to consistently exercise and watch her caloric intake. She started looking up to fitness icons like Larissa Reis. She wanted to be as successful as well-known fitness models.
Juju started training in 2001 and hasn’t stopped since. She worked out frequently and ate well to keep up her figure. The year 2008 marked Juju’s big break when she began working as a TV reporter for the program “Panic on TV.”

She spent a few years working as a reporter before being tasked with hosting a program called “Panic Delivery.” She achieved notoriety as a TV celebrity after she began presenting the program in 2010.

Juju’s popularity grew as a result of the performance, and she quickly rose to fame in Brazil. She appeared in a few additional TV programs, including “Who Arrives First?” (2010) and “Legendary” (2011–2016).

Later, she appeared on numerous magazine covers, including “Playboy,” a renowned lifestyle and entertainment publication. She was recognized for her work and accomplishments when “VIP” magazine named her the “Sexiest Woman in the World.”

After that, Juju was given the chance to represent foreign fitness brands and supplements. She also began motivating others via various social media channels. She already has more than 12 million followers on Instagram because to the pictures and videos she posts there.

She was a reporter for the “Rede Bandeirantes” TV network in Brazil in 2018. On the network’s “The Sports Show,” which is hosted by Milton Neves, Juju makes an appearance.

The popular “YouTube” video she has uploaded is called “Tour Pela Clinica Salimeni.” Juju reveals her daily routine to her followers and supporters in the 16-minute clip. In 2018, she was spotted performing the well-known samba dance at a Brazilian carnival. Additionally, she has performed at other other carnivals across Brazil.

When Juju recruited bodybuilder Felipe Franco as her personal trainer, they became friends. Before deciding to wed Felipe Franco, they had been together for ten years. In So Paulo, Brazil, on September 25, 2015, the couple exchanged vows.

The couple declared their separation after two years of marriage since their union was not going as they had hoped. They made the decision to part ways amicably. Even though they split up, they continued to be friendly and kept their business connections.

After a few months, Juju and Felipe Franco made the decision to try again with their union. They quickly shared a selfie of themselves relaxing next to a pool in each other’s company.

Juju eats six meals a day. Before eating, she meticulously weighs her meal. She is able to monitor her calorie consumption thanks to this. She abstains from fast food.

The estimated net worth of Juju Salimeni is about $1 million.