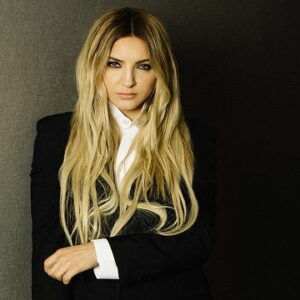 An American singer and songwriter named Julia Carin Cavazos has been nominated for a Grammy Award. Julia Michaels is her stage name, which is more well-known. She is an Iowa native who began singing at the age of 12. She eventually connected with songwriter Joleen Belle, with whom she developed a long-lasting professional connection, two years later. At the age of 19, she met Lindy Robbins, with whom she co-wrote songs that were later performed by groups like Fifth Harmony and Demi Lovato. Justin Tranter, who later became Michaels’ writing partner, has also collaborated with her. She published her first Extended Play under her own name in 2010 and has since released two additional EPs, the most recent of which, named “Nervous System,” was released on Republic Records in 2017. She was nominated for MTV Music Video, Billboard Music, and American Music Awards in addition to her two Grammy nominations.

Since she was 16 years old, Julia Michaels has been working in the music industry. In 2010, she launched her debut song collection, an Extended Play with the same name. She released her second EP, “Futuristic,” two years later.
At the age of 19, she started working with Lindy Robbins. They co-wrote the well-known songs “Fire Starter” (performed by Demi Lovato) and “Miss Movin’ On” (Fifth Harmony). She developed a name for herself as a rising songwriter and swiftly found success in the music business.

When she was 20 years old, she first met Justin Tranter, her current songwriting collaborator. She and the Norwegian musician Kygo performed “Carry Me” at the Rio de Janeiro, Brazil, 2016 Summer Olympics’ closing ceremony.

She joined the Universal-owned Republic Records record company in October 2016 and released her first solo single, “Issues,” in January 2017. She later admitted that she kept the song to herself despite receiving a lot of interest from well-known musicians. She became well-known as a result, becoming one of 2017’s breakout performers. For “Issues,” she received nominations for Best New Artist and Song of the Year at the 2018 Grammy Awards. She received nominations for the song for the American Music Award, Billboard Music Award, and MTV Music Video Award.

For the cheesy comedy series “Girls” on HBO, she recorded the song “How Do We Get Back to Love.” The song was released in April 2017.

She released “Nervous System,” her third EP overall and first on a big label, on July 28, 2017. The majority of the music on the EP were written by Michaels and Tranter. They also wrote the song “Friends,” which Justin Bieber and BloodPop® later sang.

She was the star of the Nervous System Tour in 2017 and Shawn Mendes’ opening act for the Oceania leg of his Illuminate World Tour from November 25 to December 6. Michaels will perform on Maroon 5’s Red Pill Blues Tour and Niall Horan’s Flicker World Tour, respectively.

Although she was raised in Santa Clarita, California, a city north of Los Angeles, Julia Michaels was born on November 13, 1993, in Davenport, an American city on the Mississippi River. Juan Manuel Cavazos and Julie Scriven are her parents. Jaden, her older sister, is a singer-songwriter as well. Among the musicians who inspired Michaels are Fiona Apple, Lisa Mitchell, Laura Marling, Missy Higgins, Paramore, Juliet Simms, Sarah Blasko, and The Fray.

In order to pursue a career as an actor in Los Angeles, her father, Juan Manuel Cavazos, who is originally from Puerto Rico, legally changed his identity to John Michaels.

Michaels has been creating songs since she was a little child, but she didn’t start singing until she was 12 years old. After she met Joleen Belle, they developed a close working connection and recorded a number of memorable songs together, including “Without You,” the theme song to “Austin & Ally.”

American singer-songwriter Julia Michaels has a $12 million dollar net worth. Before releasing her first (Grammy-nominated) hit, “Issues,” in 2017, Julia Michaels started her music career by penning songs for other singers. In addition to the album “Not in Chronological Order,” Julia has also published the EPs “Julia Michaels” (2010), “Futuristic” (2012), “Nervous System” (2017), “Inner Monologue Part 1” (2019), and “Inner Monologue Part 2” (2019). (2021). Her smash hit “Issues” reached the top 10 on the charts in Australia, Belgium, the Czech Republic, Denmark, France, Norway, Romania, Scotland, and the U.K., as well as the U.S. “Billboard” Adult Top 40, Mainstream Top 40, and Dance/Mix Show Airplay charts. It was certified 5x Platinum in the U.S., 6x Platinum in Canada, and Diamond in France. Additionally, Michaels contributed to the songs “Carry Me,” “Friends” remix, “I Miss You,” “Keith Urban,” “Coming Home,” “Lie to Me,” and “5 Seconds of Summer” (“If the World Was Ending”).