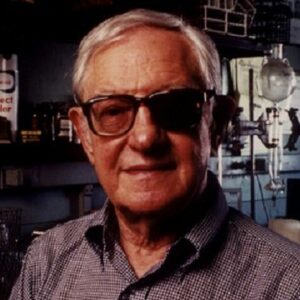 Julius Axelrod was an American biochemist who shared the 1970 Nobel Prize in Physiology or Medicine with two other laureates. He received the award for his research on catecholamine neurotransmitters, a class of chemicals found in the brain. Additionally, he made significant contributions to our understanding of the pineal gland. Born in New York City to Jewish immigrants from Poland, he developed an early interest in science, particularly medicine. He graduated from the College of the City of New York with a bachelor’s degree in biology. He desired a career as a physician but was denied admission to every medical school to which he applied. He began his career as a chemist before joining the Goldwater Memorial Hospital’s research division, where he worked under the eminent biochemist Bernard Beryl Brodie, a pioneer in the field of drug metabolism. Axelrod pursued a career in research and conducted critical studies on analgesic medications under his mentorship. He eventually became a member of the National Institute of Mental Health, where he remained for the remainder of his career. His pioneering work on the release, reuptake, and storage of the neurotransmitters epinephrine and norepinephrine earned him a joint 1970 Nobel Prize in Physiology or Medicine with Bernard Katz and Ulf von Euler.

Julius Axelrod was born on May 30, 1912, in New York City. His parents, Molly and Isadore Axelrod, were Polish Jews. His father was a weaver of baskets.
Julius developed an early interest in science and earned a bachelor’s degree in biology from the City College of New York in 1933. He desired a career in medicine but was rejected by every medical school to which he applied.

He began his career with the New York City Department of Health and Mental Hygiene in 1935, after working briefly as a laboratory technician at New York University. One of his duties was to conduct tests on vitamin supplements added to food. During this time period, he also attended night school and earned a master’s degree in sciences from New York University in 1941.

Julius Axelrod joined the Third New York University Research Division, Goldwater Memorial Hospital, as a Research Associate in 1946. He worked under the eminent biochemist Bernard Brodie, and the two men conducted research on the mechanism of action of analgesics (pain relievers).

At the time, it was discovered that users of non-aspirin analgesics were developing methemoglobinemia, a blood disorder. Axelrod and Brodie discovered that the problem was caused by acetanilide, the active ingredient in these painkillers.

Additionally, their research established that the chemical acetaminophen possessed analgesic properties and recommended its use. Acetaminophen, marketed under the brand names Paracetamol, Tylenol, and Panadol, quickly became a very popular painkiller on a global scale.

In 1949, Axelrod was appointed Associate Chemist in the National Heart Institute’s Section on Chemical Pharmacology in Bethesda, Maryland. In 1953, he was promoted to Senior Chemist. He studied the sympathetic nervous system and its primary neurotransmitters, epinephrine and norepinephrine, in this area.

In 1955, he was appointed Chief of the Section on Pharmacology at the National Institute of Mental Health’s Laboratory of Clinical Science. He remained at the institute until 1984, when he retired.

In the 1950s, he pioneered catecholamine research. While researching monoamine oxidase (MAO) inhibitors, he demonstrated that catecholamine neurotransmitters do not simply cease to function once released into the synaptic synapse. This discovery prompted additional research into the release, reuptake, and storage of the neurotransmitters epinephrine and norepinephrine, more commonly referred to as adrenaline and noradrenaline.

He discovered and isolated the enzyme catechol-O-methyl transferase in the late 1950s. This enzyme is involved in the breakdown of catecholamines. This enzyme’s discovery aided in the understanding of the entire nervous system and also aided in research on hypertension and schizophrenia.

In his later years, he concentrated on pineal gland research. He and his colleagues demonstrated that the hormone melatonin, as well as the neurotransmitter serotonin, are derived from tryptophan. Additionally, he established that melatonin had a broad range of effects throughout the central nervous system.

He has also served on the editorial boards and committees of several journals, including the ‘Journal of Pharmacology and Experimental Therapeutics,’ the ‘Journal of Neurochemistry,’ and the ‘International Journal of Psychobiology.’

Julius Axelrod was well-known for his research on the metabolism of catecholamines. Additionally, he discovered and characterized the enzyme catechol-O-methyl transferase, which is involved in catecholamine breakdown.

In 1967, he received the Gairdner Foundation International Award.

Julius Axelrod was jointly awarded the 1970 Nobel Prize in Physiology or Medicine with Sir Bernard Katz and Ulf von Euler “for their discoveries concerning the humoral transmitters in nerve terminals and the mechanisms governing their storage, release, and inactivation.”

In 1938, Julius Axelrod married Sally Taub. They were the parents of two children. After 53 years of marriage, his wife died in 1992.

He sustained an injury to his left eye when an ammonia bottle exploded in the lab. He spent the remainder of his life wearing an eyepatch.

The estimated net worth of Julius Axelrod is $3 million.