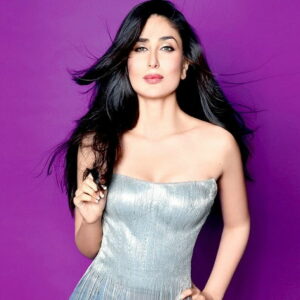 Kareena Kapoor is a Bollywood actress who has appeared in films like as ‘Kabhi Khushi Kabhie Gham…,’ ‘Chameli,’ ‘Omkara,’ and ‘Bajrangi Bhaijaan.’ She is one of the most paid leading women in Bollywood and one of the most popular actresses in the Hindi film business. She was introduced to the film industry at a young age being the daughter of legendary actors Randhir and Babita Kapoor. Karisma Kapoor, her older sister, is also a well-known actress. As a 19-year-old, Kareena made her cinematic debut in the war picture ‘Refugee,’ which was a moderate hit and helped establish her career as an actor. Despite a promising start, she battled for a few years to establish herself after a run of failures. Kareena revitalized her career with her portrayal of a pleasant girl in the romantic comedy ‘Jab We Met.’ She is talented and beautiful. She has received various honors and prizes, including six ‘Filmfare Awards’ out of 10 nominations in July 2017. Kareena Kapoor is the co-author of three books, including two nutrition guides, in addition to her acting career. She also has her own apparel brand through the ‘Globus’ retail network.

Kareena Kapoor was born in Mumbai, India, on September 21, 1980, to Randhir and Babita Kapoor. Her parents were both well-known performers, however her mother retired following her marriage. Karisma, her older sister, is her only sibling. From her father’s side, she is Punjabi, and from her mother’s side, she is Sindhi and British.
Kareena was born into a family of actresses and was exposed to the industry from a young age. She was inspired by actors like Meena Kumari and Nargis and aspired to pursue a career in the industry.

Her father forbade his daughters from working in the film industry. His conservative views caused a rift between her parents, and they eventually divorced. Kareena and her sister shared a home with their mother, who worked multiple jobs to support the family. Karisma went on to become an actor, which inspired her younger sister to pursue her goals as well.

Kareena attended Mumbai’s ‘Jamnabai Narsee School,’ then Dehradun’s ‘Welham Girls’ School.’ She was not academically inclined, but she did well in school to keep her mother pleased.
She then went on to ‘Mithibai College’ to study commerce for two years before enrolling in a three-month summer school in microcomputers at ‘Harvard Summer School’ in the United States.

She returned to India and enrolled in Mumbai’s ‘Government Law College,’ but dropped out after a year. She decided to pursue acting professionally in her late teens and began training with Kishore Namit Kapoor, a member of the ‘Film and Television Institute of India’ (FTII).

In the year 2000, Kareena Kapoor made her acting debut in the war film ‘Refugee.’ She played a Bangladeshi girl who falls in love with a refugee, played by Abhishek Bachchan, when she was 19 years old. The picture was a moderate success, and the young actress received a lot of praise for it.

‘Mujhe Kucch Kehna Hai,’ directed by Satish Kaushik, starring her opposite Tusshar Kapoor in 2001. The film was a box office success, propelling Kapoor into the spotlight. In the same year, she appeared in the film ‘Kabhi Khushi Kabhie Gham…’ alongside superstars Amitabh Bachchan, Jaya Bachchan, Shahrukh Khan, and Kajol.

She has played the stereotyped part of a lovely, shallow girl in a number of films by the mid-2000s. She took on the hard character of a sex worker in the film ‘Chameli’ in order to escape being typecast (2004). This role allowed her to re-invent herself as a performer.

She appeared in three films in 2006: “36 China Town,” “Chup Chup Ke,” and “Omkara.” The next year, she acted alongside Shahid Kapoor in the romantic comedy film ‘Jab We Met,’ in which she played a beautiful girl named ‘Geet.’

She appeared in the ensemble cast of the 2009 film ‘3 Idiots,’ which was partially based on Chetan Bhagat’s novel ‘Five Point Someone.’ In the film, she played a medical student named ‘Pia,’ with Aamir Khan, R. Madhavan, and Sharman Joshi. The picture was a box office success.

She married in late 2012 and cut back on her career to spend more time with her family. She didn’t take on any major assignments after that, and she only appeared in a few films as a cameo.
In 2016, she returned to acting full-time and starred in the film ‘Ki & Ka,’ playing the role of ‘Kia,’ a career-driven young lady.’ In the same year, she starred in the critically acclaimed film ‘Udta Punjab’ as ‘Dr. Preet Sahni.’

In Shashanka Ghosh’s buddy comedy film ‘Veere Di Wedding,’ she played ‘Kalindi Puri.’ In Raj Mehta’s comedy film ‘Good Newwz,’ she played ‘Deepu Batra.’ She starred as ‘Naina’ in the comedy drama ‘Angrezi Medium’ the following year. In addition to her acting profession, she has collaborated with the retail chain ‘Globus’ to establish her own clothing brand. She’s also co-authored three books, including an autobiography and two dietary manuals.

Kareena Kapoor is involved in a variety of charitable projects. In 2014, she began working with UNICEF to promote girls’ education. She has also served as an ambassador for NDTV’s ‘Shakti Campaign,’ which aims to end violence against women.

The critics praised Kareena Kapoor’s performance as ‘Dolly Mishra’ in the 2006 crime drama film ‘Omkara.’ ‘Othello,’ a play by William Shakespeare, was made into a film. She got the ‘Filmfare Best Actress (Critics) Award’ for this performance. At the 2006 Cannes Picture Festival, the critically acclaimed film was screened in the ‘Marché du Film’ section.

In the romantic comedy ‘Jab We Met,’ she played a vibrant woman named ‘Geet.’ The story follows two people with opposite personalities who meet on a train and eventually fall in love. Her performance was praised and she received multiple accolades for it.

‘Dr. Preet Sahni’ in Abhishek Chaubey’s critically acclaimed film ‘Udta Punjab,’ the actress discarded her gorgeous persona to play the somber role of ‘Dr. Preet Sahni.’ Substance abuse was the subject of the film, which was set in the Indian state of Punjab. Her performance got her nominations for ‘Filmfare Awards’ and ‘Zee Cine Awards’ for ‘Best Supporting Actress.’

Shahid Kapoor, a fellow actor, was Kareena Kapoor’s boyfriend. Their love drew a lot of media attention, and their breakup was also well reported.

Later on, she began dating actor Saif Ali Khan. The couple first kept their relationship a secret, but eventually revealed that they were dating. The couple married on October 16, 2012, and in December 2016, they welcomed a baby named Taimur.

Kareena Kapoor has a net worth of $16 million.