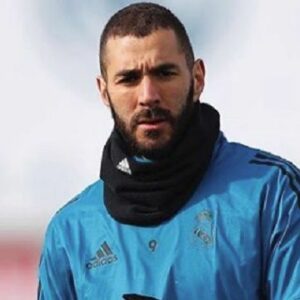 Karim Mostafa Benzema is a French professional footballer who now plays as a striker for both the French national team and Real Madrid, a Spanish professional football club. At the age of nine, he joined the Lyon-based French football team ‘Olympique Lyonnais,’ also known as ‘Lyon.’ He made his professional debut in the 2004–2005 season and rose to prominence in the 2007–2008 season, scoring over 30 goals to help ‘Lyon’ win their eighth consecutive league title. He was selected ‘Ligue 1 Player of the Year,’ and the ‘National Union of Professional Footballers’ named him to their ‘Team of the Year’ (UNFP). He signed a six-year contract with ‘Real Madrid’ in 2009 and has won the ‘Copa del Rey’ and ‘La Liga’ with the club. He was named “French Player of the Year” three times. His accomplishments as a member of the national squad are similarly impressive. He was a member of the 2004 ‘UEFA European Under-17 Championship’ winning ‘Under-17’ team. He played in three major international tournaments after making his senior debut in March 2007, including the ‘UEFA European Football Championship’ in 2008 and 2012, and the 2014 ‘FIFA World Cup.’

He was born in Lyon, France, on December 19, 1987, to Hafid Benzema and Wahida Djebbara, both of Algerian heritage. With his eight siblings, he grew up in a small house in Bron and enjoyed a simple life.
He began his football career when he was eight years old, when he joined the local football team ‘Bron Terraillon SC.’ His younger brothers, Sabri and Gressy, also played football. After scoring two goals against the club’s youth academy in a ‘Under-10’ encounter, Benzema drew the attention of ‘Lyon’ authorities. In 1996, he became a member of ‘Lyon.’

After joining Lyon, he was accepted into the club’s academy, where he quickly advanced through the youth ranks. He scored 38 goals in the French domestic league ‘Championnat National des 16 ans,’ which is for footballers under the age of 16.

Prior to the 2004–2005 season of the ‘Ligue 1,’ he was promoted to the reserve team of the club that competed in the amateur football league ‘Championnat de France Amateur.’
On January 15, 2005, he made his professional debut against ‘FC Metz.’ The match ended in a 2–0 victory for ‘Lyon.’ Following that, Benzzema signed a three-year professional contract with the company. That season, the club won their fourth league title in a row.

On December 6, 2005, he made his ‘UEFA Champions League’ debut in ‘Lyon’s’ final group-stage encounter against the Norwegian club ‘Rosenborg,’ which the club won 2–1. Benzema scored his first professional goal in this encounter.

In the ‘Coupe de France,’ he scored his first professional double in January 2006, when ‘Lyon’ defeated ‘Grenoble’ 4–0. He scored his first professional league goal on March 4, the same year, when playing against ‘Ajaccio.’
During the 2007–2008 season, he was the team’s leading striker. He led the league in scoring with 20 goals, earning him the ‘Trophée du Meilleur Buteur’ trophy. He scored a goal in the ‘Coupe de la Ligue,’ four goals in the ‘Champions League,’ and six goals in six ‘Coupe de France’ games, helping ‘Lyon’ to their first double in the club’s history. That season, he also scored a hat-trick against ‘Metz,’ on September 15.

On March 13, 2008, he signed a contract extension with ‘Lyon,’ ensuring that he would be retained until 2013, with the option of a one-year extension. The ‘UNFP’ recognized him ‘Ligue 1 Player of the Year’ and included him in the ‘Team of the Year’ that season. In 2008, he was also awarded the ‘Bravo Award’ by the Italian magazine ‘Guerin Sportivo.’

He signed a six-year contract with the Spanish professional football team ‘Real Madrid’ on July 9, 2009. On July 20, that year, he made his debut for the club in a pre-season friendly match against the Irish team ‘Shamrock Rovers’ in Dublin. In the same game, he scored his first goal for the club and led them to a 1–0 victory.
On August 24, 2009, he scored two goals against the Norwegian club ‘Rosenborg’ in a 4-0 win for ‘Real Madrid’ in an annual friendly tournament organized for the ‘Santiago Bernabeu Trophy.’

On August 6, 2014, the club announced a new five-year contract between Benzema and ‘Real Madrid.’ Benzema’s contract specified that he would stay with the club until 2019. He was selected ‘La Liga Player of the Month’ in October of that year.

On March 28, 2007, he made his senior international debut, and in 2008 and 2012, he represented France in the UEFA European Football Championship. He was also a member of the French team that competed in the ‘FIFA World Cup’ in 2014. So far, he has received over 80 caps. He was, however, left out of the selections for the ‘FIFA World Cup’ in 2010 and the ‘UEFA European Championship’ in 2016.

From 2010 through 2013, he was romantically linked to Manon Marsault.
Mélia, his daughter, was born on February 3, 2014, and Ibrahim, his son, was born on May 5, 2017.
He is a devout Muslim who fasts during Ramadan, the Islamic holy month.
He got himself into legal trouble twice. He was charged with “solicitation of a young prostitute,” an incident that was first reported on April 18, 2010 by French TV channel ‘M6.’ The lawsuit is currently in court. On November 4, 2015, he was arrested by French authorities for blackmailing French international footballer Mathieu Valbuena.

Karim Benzema has a net worth of $70 million dollars.