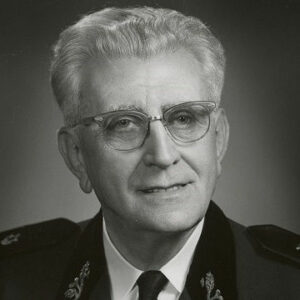 Karl L. King was the leader of an American marching band and a composer. His work “Barnum and Bailey’s Favorite” is one of the most popular pieces of marching music for circuses. He was not only a great composer, but he was also a great baritone and cornet player. His march pieces became very popular in circus bands, which had a hard time finding standard march music before him. Many circus groups used his music, and many of his pieces are now considered to be classics in this style. The name “March King” was given to him because of what he did for circus music. He and John Philip Sousa both held this title for a long time. Karl King’s music stood out because it fit the rhythm of the acts, and he quickly became a leader in top circus bands like those of Buffalo Bill and the Barnum and Bailey. He only wrote music for circus bands and did more for them than any other composer. He was best at writing aerial waltzes and circus galops, which were very popular during his time and even after he died. No other composer has been able to top the popularity of his works. He was a humble man who lived a normal life. He was loved and respected as a great person and a great composer. Learn more about this story by reading on.

Karl Lawrence King was born on February 21, 1891, in Plantersville, Ohio. His parents were Sandusky S. and Anna Lindsey King.
His father played the tuba. When he was 11, his family moved to Canton, where Lawrence worked as a newspaper carrier to earn enough money to buy his first instrument, a cornet.

Emile Reinkendorff, who was in charge of the Grand Army Band of Canton, helped him learn how to play this instrument. He learned music mostly on his own, with help from other musicians when he was in the Canton Marine Band and played brass instruments.

He didn’t get proper education because he quit school after eighth grade to become a printer, but he ended up becoming a writer instead. William Bradford, a famous musical show director, gave him four piano lessons and one harmony lesson, which helped him improve his skills. So, he got to know how scores work and learned the basics of how to write music.

Soon after he got good at music and composing, famous bands like the Thayer Military Band in Canton, Ohio, led by William E. Strassner, and the Neddermeyer Band of Columbus, Ohio, led by Fred Neddermeyer, asked him to play with them.

These two pieces would be his first time writing march music for a living. He knew how to play instruments like the cornet and the baritone horn well. Karl King switched from cornet to baritone horn later, and Strassner helped him learn how to play it. He was also in the Soldier’s Home Band in Danville, Illinois, for a while.

Karl King started leading circus bands and playing baritone when he was 19 years old, in 1910. In the same year, he got a job offer from the Robinson Famous Shows, where he worked under the famous music conductor Woodring Van Anda. In 1912, he played in the band of Yankee Robinson Circus, which was led by Theo Stout.

Then he moved to the Sells-Floto Circus and worked for the famous march conductor W.P. English. In 1913, he moved to the Barnum and Bailey band and worked for Ned Brill. Karl King wrote “Barnum & Bailey’s Favorite,” the most well-known American circus march, while he was working at Barnum and Bailey. He wrote it for Brill. This became very popular, and other circus bands began to play it too.

Karl King got a full-time job as a conductor in 1914 when he joined the combined shows Sells Floto Circus and Buffalo Bill’s Wild West Show. He worked there for three seasons. In 1915, he became the bandmaster for the Sells-Floto Circus. In 1917, he did the same job for the Barnum and Bailey Circus.

After Circus Bands, What’s Next?

Karl King wanted to join John Philip Sousa at the Great Lakes Naval Training Station during World War I, but there were already too many people there. Sousa suggested that Karl King join the army and be the bandmaster at Camp Grant. However, the War ended the day he was supposed to join, so he couldn’t serve.

Karl King moved back to Canton in 1919, where he led the Grand Army Band. He also started a company called “K.L. King Music House,” which is in the business of publishing music. “Broadway One-Step” was the first book that the company put out. By 1920, he had made Fort Dodge his home.

From that point on, he led the Fort Dodge Municipal Band, which he did for the next 51 years. His band included Joseph Hermann, who later became president of the Bandmasters Association. King worked hard to make the band better, and over time, it became known as King’s Band.

Karl King was a big reason why the Iowa Band Law was passed in 1921. This law let cities charge a local tax to pay for the upkeep of a band. When the law was passed, he was so happy that he wrote a famous march about it. He called it “Iowa Band Law.”

In 1951, when Karl King was 59 years old, 250 people were invited to a dinner in his honor. Glenn Cliffe Bainum, Albert Austin Harding, Paul V. Yoder, and William H. Santelmann, all big names in the band world, were at this important dinner. William S. Beardsley, the governor of Iowa, was another famous person who came to this big event.

In 1960, Karl King led the largest mass band ever, which was made up of 13,000 musicians from 188 high school bands. This big band was called “Iowa Band Law,” and it played at a University of Michigan football game that was shown all over the country.

Karl King wrote more than 300 pieces of music during his life. There are 188 marches and screamers and 188 gallops, waltzes, overtures, serenades, and rags. His pieces for circus bands have a high level of difficulty, as high as 4 or 5 grades.

He had also written a number of great pieces for school bands, with different levels of difficulty. “Moonlight on the Nile Waltz” was his first piece to be protected by copyright, while “Barnum and Bailey’s Favorite” is known as his best piece. Here are a few of King’s most important works:

Karl King was honored with a bridge over the Des Moines River in Fort Dodge in 1962.
In 1966, Karl King was chosen to be a member of the Society of European Stage Actors and Composers.
Karl King got the Distinguished Service Award from Kappa Kappa Psi National Honorary Band Fraternity in 1967.

Getting Recognized after Death

Karl King won the Iowa Award, which is the highest honor a state can give to a person, after his death in 1975.
In 1976, the Fort Dodge Band Shell was fixed up and named for Karl King.

Karl King is put into the Hall of Fame of Distinguished Band Conductors by the National Band Association in 1980.
In 1995, Karl King was added to the Circus Ring of Fame.
In 2006, a statue of Karl King was put up in Fort Dodge.

About Your Own Life and Death

In 1916, Karl King married Ruth Lovett, who played the calliope. She was there with him for his last calliope performance with the band. Karl L. King was born in 1919. He was his only child. He said that when he led the Barnum and Bailey band at Madison Square Garden was the proudest moment of his life.

Karl King died on March 31, 1971, when he was 80 years old. He had severe diverticulitis and was taken to a hospital in Fort Dodge, Iowa. North Lawn Cemetery is where he was laid to rest. Later, his son Karl King Jr., who died in 1987, and his wife Ruth I. King, who died in 1988, were both buried at the same place.

Karl is one of the wealthiest composers and is on the list of the most famous composers. Wikipedia, Forbes, and Business Insider all say that Karl King has a net worth of about $19 million.