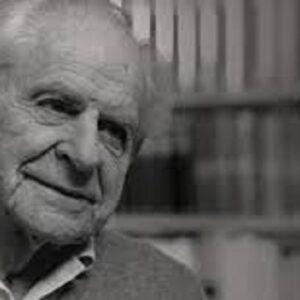 Karl Popper, sometimes known as Sir Karl Raimund Popper, was a professor at the London School of Economics and an Austrian-born British philosopher. He is regarded as one of the best twentieth-century philosophers of science. He published numerous works on social and political philosophy. The rejection of the inductive process in the empirical sciences is his primary contribution to philosophy. The extensive list of Popper’s honors and awards in his field includes the Lippincott Award of the American Political Science Association, the Sonning Prize, and fellowships from the Royal Society, British Academy, London School of Economics, King’s College London, Darwin College Cambridge, and Charles University in Prague. From 1958 to 1959, Popper served as the president of the Aristotelian Society. In 1965, he was knighted by Queen Elizabeth II. Among his significant publications are “The Logic of Scientific Discovery,” “The Poverty of Historicism,” and “The Open Society and Its Enemies.”

Karl Popper was born in Vienna on July 28, 1902. Prior to his birth, his grandparents were Jewish, but his family had converted to Lutheranism. His father Simon Siegmund Carl Popper was a lawyer with a passion for classics and philosophy. His interest in social and political issues was fostered by his father.

Jenny Schiff, his mother, was of Silesian and Hungarian heritage. His father became a legal partner of Vienna’s liberal mayor Raimond Grübl within just a few years of his family’s arrival in Vienna. When the mayor died in 1898, his father assumed control of the business.

He also joined the Austrian Social Democratic Workers’ Party, which adhered to the Marxist doctrine. However, he quickly became disillusioned with the dogmatic nature of Marxist doctrine. He abandoned the ideology and remained a lifelong advocate of social liberalism.

During this time, Popper learned about the psychoanalytic theories of Freud and Adler and attended Einstein’s lecture on relativity theory in Vienna. Under the direction of Karl Buhler, he got a teaching certificate for an elementary school in 1925 and a Ph.D. in philosophy in 1928. His thesis was titled “The Methodology Question in Cognitive Psychology.”

By 1929, Popper was certified to instruct secondary school mathematics and physics. From 1930 until 1936, he served as a secondary school teacher. In 1934, Popper released his first book, Logik der Forschung (The Logic of Scientific Discovery), in which he critiqued psychologism, naturalism, inductionism, and logical positivism and advocated his theory of potential falsifiability as the dividing line between science and non-science.

In 1937, in response to the emergence of Nazism and the possibility of Anschluss, Popper emigrated to New Zealand. He became an instructor in philosophy at Canterbury University College in New Zealand. At the university, he composed “The Open Society and Its Enemies,” his most important book.

In the year 1965, Queen Elizabeth II knighted him. In 1969, he retired from academic life but remained intellectually active for the remainder of his life. In 1976, Popper was elected a Fellow of the Royal Society. He was awarded the Insignia of a Companion of Honor in 1982. In addition, he was a member of the Academy of Humanism.

He identified as an agnostic who respected the moral precepts of Christianity and Judaism. The Austrian government additionally gave him the Grand Decoration for Services to the Republic of Austria in Gold.

On September 17, 1994, Karl Popper died at the age of 92 in Croydon, United Kingdom.
After his cremation, his ashes were sent to Vienna. His wife Josefine Anna Henninger was interred at the Lainzer cemetery adjacent to the ORF Centre, where he was also laid to rest.

Karl Popper was instrumental in establishing the philosophy of science as a robust, independent subfield of analytic philosophy. This includes his numerous and influential works as well as his impact on his contemporaries and students.

In 1946, he founded the London School of Economics Department of Philosophy, Logic, and Scientific Method. Imre Lakatos and Paul Feyerabend, who eventually became two of the most prominent philosophers of science in the subsequent generation of philosophy of science, were affected by Karl Popper’s lectures at the department.

Despite some concerns over the problem of influence, Popper maintained a long-standing and strong connection with the Austrian economist Friedrich Hayek. They mutually supported one another and produced similar works. Popper is said to have stated that he learned more from Hayek than from any other philosopher, with the exception of Alfred Tarski.

George Soros, a wealthy investor and one of Popper’s classmates at the London School of Economics, credits Popper with his financial strategies. Soros asserts that his techniques are founded on Popper’s conception of the advancement of knowledge via the distinctively Hegelian concept of falsification.

In homage to Popper, Soros established the Open Society Institute, a nonprofit organization. The foundation seeks to promote the Popperian defense of the free society against authoritarianism and totalitarianism. His thinking also contributed to the formation of the libertarian Taking Children Seriously movement.

Karl Popper’s estimated net worth is $5 million, with primary sources of income being sociologist, writer, university professor, philosopher of science, and philosopher. We lack sufficient evidence regarding Karl Popper’s automobiles and lifestyle.