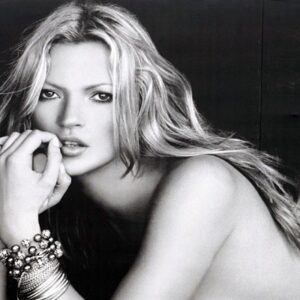 Kate Moss carved out a place in the modeling profession with her diminutive stature and size zero body, which contrasted sharply with many of the voluptuous supermodels of the period. She popularized the concept of delicate beauty and the ‘waif’ style. She is one of the most recognizable faces in the fashion industry, having graced the covers of over 300 publications. She has also collaborated with all of the industry’s leading fashion houses, designers, and photographers, including Dolce & Gabbana, Gucci, Bulgari, Calvin Klein, Chanel, and Rimmel. She went on to become one of the world’s top fashion models after successfully putting herself at the forefront of the fashion scene. Moss, however, did not limit herself to the runway; she entered the realm of enterprise with the introduction of her own clothing brand, which has widened and diversified her horizons. She has also been in a number of music albums and music videos. She is a very private lady who does not appear on television or do interviews very often.

Kate Moss is the daughter of Peter Edward Moss, a travel agent, and Linda Rosina, a barmaid, and was born in Croydon, Greater London. She has three brothers and sisters.

She received her primary education at Ridgeway Primary School in Addiscombe, a neighborhood in south London. She went on to Riddlesdown Collegiate following that. Her parents split when she was thirteen years old.

Sarah Doukas, the founder of Storm Model Management, noticed her at JFK Airport in New York City in 1988 when she was fourteen years old. Sarah was the first person to wear the ‘waif’ style.
In 1990, she began her modeling career by posing for black-and-white images for the British magazine ‘The Face.’ Corinne Day, who shot the photos, dubbed the shoot ‘The 3rd Summer of Love.’

She was the face of the Calvin Klein brand at the age of eighteen. She starred in the ad campaign for the perfume ‘Obsession,’ in which she modeled alongside Mark Wahlberg. Her breakthrough came as a result of the advertisement, as she was spotted all over the world. While some admired and complimented her slim figure, the majority dismissed her as anorexic.

She made her first appearance in the British Vogue magazine in January 1993. She featured on the cover of the same magazine twice in two months.
Moss bucked all conventions and became the anti-supermodel of the 1990s, when being voluptuous and curvy was the order of the day, with the likes of Claudia Schiffer, Naomi Campbell, Cindy Crawford, and Elle Macpherson donning the same.

She has been in multiple songs by the English rock band ‘Oasis,’ including ‘Don’t Go Away,’ ‘Fade Away,’ and the 1997 album named ‘Be Here Now,’ in addition to walking the runway and appearing on the covers of publications.
She made her screen debut in the British screen comedy ‘Blackadder: Back & Forth’ in 1999. ‘Maid Marian’ was her character.

She has been in a number of famous and well-known fashion publications in the UK, US, and France over the years, including ‘Vogue,’ ‘W,’ ‘Another Man, Vanity Fair, and the Face.’
She appeared in the music video ‘I Just Don’t Know What To Do With Myself’ by ‘The White Stripes’ in 2003. She was seen pole dancing in the music video.

She was a model for the Rimmel London mascara in 2005. She was featured in the commercial wearing leather and riding a motorcycle across London to the tune of the rock song ‘Another Cold Beer.’
After a drug controversy in 2006, she returned to modeling. She landed around 18 significant modeling contracts during the autumn/winter season of that year.

In 2007, she produced her own collection in cooperation with Katy England for ‘Topshop’, a woman’s clothing label. The collection was made up of designs and concepts inspired by her personal flair.
She later collaborated with ‘Coty,’ a global beauty product line, in 2007. They released a body lotion and scent range.
She teamed with Longchamp, a French luxury leather goods firm, in 2010 to create a one-of-a-kind handbag series. She had been a member of their campaigns for the previous eight seasons.

She was the brand ambassador and face of Mango, a Spanish fashion retailer, in 2011.
She appeared in George Michael’s video for the song “White Light” in 2012. In the same year, she and Naomi Campbell performed at the 2012 Olympic Games. She was the face of Supremes’ 2012 spring/summer collection.
She posed with singer Rihanna for a V magazine cover shot in 2013. The shoot was personal, with both of them dressed in lingerie and embracing in a sensuous embrace.

She won the ‘Fashion Personality of the Year’ award in 1995.
She was awarded the Fashion Icon award by the Council of Fashion Designers of America in 2005.

She gave birth to a daughter, Lila Grace Moss Hack, in 2002. Editor Jefferson Hack was the father of this child.
She has had romantic relationships with actors Johnny Depp and Pete Doherty, a former member of the Libertines.
Jamie Hince, guitarist for the band ‘The Kills,’ married her in 2001.

The ‘Daily Mirror’ published a story on her alleged cocaine addiction in 2005. That year, she was involved in a number of drug-related problems. Police interrogated her and she received drug rehabilitation treatment.

She is a supporter of the Breakthrough Breast Cancer Foundation and designed a charm necklace in 2007 to raise money for Cancer Research in the UK.
She has donated to the Elton John AIDS Foundation, Make Poverty History, Comic Relief and Homes of Hope, the Hoping Foundation, and the Lucie Blackman Trust, among other charities.

Kate Moss has a net worth of $70 million.

As part of the British Museum exhibition in 2008, an 18 carat gold statue of this English supermodel was revealed. The statue, designed by Marc Quinn, is considered to be the largest gold statue built since the time of Ancient Egypt.