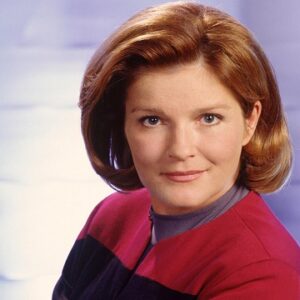 Kate Mulgrew, born Katherine Kiernan Maria, is an American actress who has appeared in several stage productions, films, and television shows over the course of her career. Her different roles show that she is equally at home in comedic and dramatic roles. Her primary love, though, has always been theatre, and her husky voice, which she has contributed for voiceovers in animation films and video games, has been her signature. She is most remembered for her role as Captain Kathryn Janeway on ‘Star Trek Voyager,’ in which she played Mary Ryan on the daytime serial ‘Ryan’s Hope.’ Her mother, who died of Alzheimer’s disease when she was young, had a big influence on her. As a result, she became a member of the Alzheimer’s Association National Advisory Council and the Cleveland Metro Health System, where she gave multiple speeches. She is very outspoken about her opposition to abortion and the death penalty, and she is a devout Catholic who believes that all forms of human life should be protected.

Katherine Kiernan Maria Mulgrew was born on April 29, 1955, in Dubuque, Iowa, to Thomas James Mulgrew and Joan Virginia. She was the eldest of eight children in an Irish Catholic family. Her father was a builder, while her mother was a painter and artist. She exhibited an interest in acting when she was 12 years old, and with her mother’s support, she enrolled in a summer acting school.
She successfully auditioned for the London Academy of Music and Dramatic Art at the age of 16, but was told she was too young to enter the academy.
She graduated from Wahlert High School in Dubuque, Iowa, then went on to the Stella Adler Conservatory of Acting at New York University, where she stayed for a year before leaving. She worked as a waitress in order to supplement her income at this time. She received an associate’s degree then dropped out of university to pursue an acting career.
Her performance as Mary Ryan in the ABC drama ‘Ryan’s Hope,’ which she played for two years in her early career in the mid 1970s, is still remembered. Since then, her co-star Ilene Kristen has been a close friend. During this time, she also appeared in the American Shakespeare Theatre’s performance of ‘Our Town’ in Stratford, Connecticut.

Mulgrew began her career in the entertainment industry at an early age, and in most of her performances, she projected the image of a tough girl. Her deep voice is well-known. In 1979, she starred in ‘Mrs Columbo,’ a spin-off of a popular detective series that was tailored to her appearance. The show aired for a total of 13 episodes.
In 1981, she starred alongside Richard Burton and Nicholas Clay in the love triangle film ‘Lovespell,’ in which she played an Irish princess. Following that, she played Major Fleming in ‘Remo Williams: The Adventure Begins.’
‘Murder She Wrote,’ a riveting popular serial in which she played an opera diva who murders her husband and then fabricates an alibi, was one of her most popular roles.
Her performance as the first female captain in a series regular role on ‘Star Trek Voyager’ gained her renown and made history. The show aired on UPN for seven seasons, making it the network’s longest-running show.
Mulgrew won the ‘Saturn Award’ for ‘Best TV Actress’ for her role as Janeway in the serial in 1998. She also appeared at Star Trek conferences across the world and voiced the character of Janeway in numerous Star Trek video games.
She returned to stage after seven seasons of ‘Voyager,’ starring in the one-woman show ‘Tea at Five,’ which was a smash hit. During this time, she continued to do voice over work for video games.
She returned to television in 2006, starring in ‘Law & Order: Special Victims Unit’ and performing in ‘The Exonerated’ at London’s Riverside Studios. She was nominated for the ‘Drama League’ for her performance as Helen Donnelly in the serial ‘The Black Donnellys’ and an off-Broadway show ‘Our Leading Lady’ the following year.
She played ‘Hester Salomon’ in the Broadway play ‘Equus’ in 2008, and she also starred in the short film ‘The Response,’ which was based on the actual transcripts of the Guantanamo Bay hearings. She later returned to television, starring in the NBC medical drama ‘Mercy.’
Her involvement with the ‘Star Trek’ franchise extended with her appearances in William Shatner’s documentary ‘The Captains’ and the science fiction series ‘Warehouse 13’. In 2014, she received her first Primetime Emmy nomination for her participation in the Netflix series “Orange is the New Black.”
She has done several voiceovers for animation films and video games with her husky voice. She portrayed the wicked Red Claw against Catwoman in three episodes of Batman and in the video game ‘Run Like Hell.’
She has stated in interviews that she would love to return to Star Trek Voyager if the series is resurrected.

‘Lovespell,’ ‘A Stranger is Watching,’ ‘Round Numbers,’ ‘Camp Nowhere,’ ‘Star Trek Nemesis,’ and ‘Star Trek The Experience – Borg Invasion 4D’ are among her notable cinematic roles.
‘Ryan’s Hope,’ ‘Dallas,’ ‘A Time for Miracles,’ ‘Jessie,’ ‘My Town,’ ‘Murder She Wrote,’ ‘Roots: The Gift,’ and ‘Star Trek Voyager’ are some of her well-known television shows.
She acted in the plays ‘Our Town,’ ‘Major Barbara,’ ‘Cat on a Hot Tin Roof,’ ‘Measure for Measure,’ and ‘What the Butler Saw,’ mostly in New York and Los Angeles.

In 1980, she was nominated for a ‘Golden Globe Award’ for her portrayal as Mrs Columbo, and in 1992 and 1998, she received the ‘Tracy Humanitarian Award’ and the ‘Satellite Award’ for Best Actress – Television, respectively.
She went on to receive the ‘Carbonell Award for Best Actress’ (Touring, Independent Production-Cuillo Centre) for her work in ‘Tea at Five,’ the ‘Obie Award for Outstanding Performance in ‘Iphigenia,’ and the ‘Satellite Award’ for Netflix’s ‘Orange is the New Black,’ among other awards.
Seton Hill University in Greensburg, Pennsylvania awarded her an Honorary Doctorate of Letters for artistic contribution.

Kate gave up her first child for adoption during her early career after having her first child before marrying.
Her marriage to Robert H Egan, whom she married in 1982 and divorced after eleven years of marriage, produced two children. She dated Winrich Kolbe, the director of Star Trek Voyager, for a while after that.
She eventually married Tim Hagan, a former Cuyahoga County commissioner whom she met through her mother. She did, however, go through with another divorce, which she later regretted. Her second marriage resulted in two stepdaughters.
Kate became an active member of the Alzheimer’s Association’s National Advisory Committee after her mother died in 2006 after a lengthy fight with Alzheimer’s. She has raised millions of dollars for research and continues to be an outspoken advocate for the disease and the need for a cure.
She opposes abortion and capital punishment, claiming that all forms of life are sacrosanct, and that execution as a form of retribution is just as brutal as abortion.

Mulgrew’s biography, ‘Born With Teeth,’ was published in 2015 and is about her Irish – Catholic upbringing and her career. She discusses her experience as an unmarried mother and her subsequent reunion with her child.
Danielle, Mulgrew’s biological daughter, works as a yoga instructor and keeps in touch with her mother.
She was a personal friend of the late John F. Kennedy Jr., and she and her husband, Tim Hagan, attended his funeral.
In the November 2002 elections, her husband, Hagan, stood as a Democratic candidate for Governor of Ohio, but was unsuccessful. She lives in Brentwood, California, with her Labrador, Gracie. Her net worth is estimated to be $5 million.