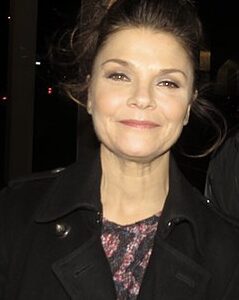 Born Kathryn Elsbeth Erbe, she is an American actress best known for portraying Shirley Bellinger in the HBO series “Oz” and Detective Alexandra Eames in the crime drama “Law & Order: Criminal Intent.” She has also made appearances in a number of other TV shows, including “The Sinner,” “How to Get Away with Murder,” “Conviction,” “Blue Bloods,” “Homicide: Life on the Street,” and “Chicken Soup.” The actress has acted in many movies and shorts, including, to name a few, “Rich in Love,” “The Addiction,” “Love from Ground Zero,” “Stir of Echoes,” “3 Backyards,” “Mother’s House,” and “Mistress America.” She has additionally performed in a few plays. She has worked on several theater productions, including “The Father,” “The Speed of Darkness,” “The Grapes of Wrath,” and “A Month in the Country.” Erbe is a strong, independent woman who is single and single-minded. She is a devoted mother to her two kids.

The career of Kathryn Erbe

In the drama series “Chicken Soup” from 1989, Kathryn Erbe made her television debut as Patricia Reece. She acted in several plays, including “The Grapes of Wrath,” “The Speed of Darkness,” and “A Month in the Country” in addition to many movies and TV shows, including “What About Bob,” “Rich in Love,” “D2: The Mighty Ducks,” “Breathing Lessons,” “The Addiction,” “Kiss of Death,” and “Dream with the Fishes.”

Later in 1998, the actress was chosen for the roles of “Love from Ground Zero” and “Naked City: Justice with a Bullet.” She also started performing as Shirley Bellinger in “Oz” that year. Shortly after, Erbe appeared in the movies “Entropy” and “Stir of Echoes.” As Det. Alexandra Eames, then joined the cast of “Law & Order: Criminal Intent,” where she remained until 2011. The American actress appeared in the movies and shorts “3 Backyards,” “Mother’s House,” and “The Love Guide” at this time.

She had cameos on “Law & Order: Special Victims Unit” in 2012 and 2013. Following this, Erbe worked on the 2014 film “Worst Friends.” She also made an appearance on the Last Week Tonight with John Oliver program that year. She made appearances in the TV shows “Elementary,” “Conviction,” “How to Get Away with Murder,” and “The Sinner” after starring in the film “Mistress America” in 2015.

Elsbeth and Richard Erbe welcomed Kathryn Elsbeth Erbe into the world on July 5, 1965, in Newton, Massachusetts, in the United States. Jonathan is her brother, and Jennifer is her sister. She studied at NYU, where she received her degree in 1989. From 1993 through 2006, the actress was wed to American actor Terry Kinney. Daughter Maeve and son Carson Lincoln are the couple’s two children.

An American actress named Kathryn Erbe has an $8 million dollar net worth. Kathryn Erbe, a native of Newton, Massachusetts, received her degree from New York University in the late 1980s. While still a college student, she made her acting debut as Lynn Redgrave’s co-star on the television series “Chicken Soup.” She then went on to participate in multiple critically praised plays with the Steppenwolf Theatre Company in Chicago, and her portrayal in the 1991 production of “The Speed of Darkness” earned her a Tony nomination. In the early 1990s, she started expanding her filmography, co-starring or supporting in movies like “What About Bob,” “D2: The Mighty Ducks,” “Kiss of Death,” and “Dream with the Fishes.” She also made guest appearances on Oz and Homicide: Life on the Street. She received the part that would earn her the most notoriety—Detective Alexandra Eames on “Law & Order: Criminal Intent”—in 2001.