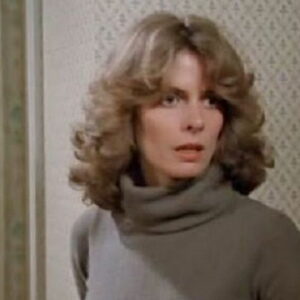 American actress Kathryn Hunter Harrold, who is now retired, works as a psychotherapist in Los Angeles, California. The former actress is renowned for having significant roles in movies including “Raw Deal,” “Nightwing,” “The Hunter,” “The Sender,” and “Modern Romance.” Throughout her 35-year acting career, Harrold also appeared in a number of well-known television programs, including “I’ll Fly Away,” “Chicago Hope,” “King of the Hill,” “Desperate Housewives,” and “Greek.” She has shared screen time with some of the most recognizable stars in the entertainment business throughout the course of her long career, including Steve McQueen, Luciano Pavarotti, and Arnold Schwarzenegger. Additionally, she was the final actress to perform alongside the late Steve McQueen. Harrold ended her acting career after making appearances in more than fifty movies and television programs. She is currently a resident of Los Angeles and owns her own counseling business.

In 1975, Kathryn Harrold made her debut in the entertainment industry as “Nola Dancy Aldrich” in the American television soap opera “The Doctors,” which also starred James Pritchett, Elizabeth Hubbard, and David O’Brien. Before Kathleen Turner took over, she portrayed the part for two years. Before landing her first leading role in a movie, she first made appearances in a few television movies and television programs.

She played the role of “Anne Dillon” in the 1979 American horror movie “Nightwing,” which was based on Martin Cruz Smith’s 1977 novel of the same name. She starred with the renowned actor Steve McQueen in Buzz Kulik’s 1980 American thriller “The Hunter,” which served as the latter’s final motion picture before his passing. Harrold rose to prominence in show business following the success of “The Hunter.”

She went on to participate in leading roles in movies such Albert Brooks’ American comedy Modern Romance (1981), the American crime thriller The Pursuit of D. B. Cooper (1981), and the musical drama Yes, Giorgio (1982), in which she starred alongside Luciano Pavarotti. Gail Farmer, the main character in the American horror movie “The Sender,” was portrayed by Harrold.

She appeared in a number of movies and TV shows in the middle of the 1980s, including “An Uncommon Love,” “Heartbreakers,” “Into the Night,” and “MacGruder and Loud.” She starred with Arnold Schwarzenegger in the 1986 American action movie “Raw Deal,” which was helmed by John Irvin. Her final acting job would be in the comedy-drama “Someone to Love” the following year, in which she portrayed an attendee.

Harrold concentrated solely on television programs and television movies over the following two decades. Prior to playing Christina LeKatzis in the critically acclaimed American drama television series “I’ll Fly Away,” she portrayed roles such as “Sara Newhouse” in “The Bronx Zoo,” “Mary Ward” in “Capital News,” and “Veronica Sheridan” in “Dream On.” She played “Francine Sanders” in each of the eighteen episodes of “The Larry Sanders Show” in 1993.

Additionally, Harrold has acted in a number of television movies, such as “The Best Legs in Eighth Grade” as “Leslie Applegate,” “Man Against the Mob” as “Marilyn Butler,” “Rainbow Drive” as “Christine,” “Deadly Desire” as “Angela,” “The Companion” as “Gillian Tanner,” “The Rockford Files: Punishment and Crime” as “Megan Dougherty Adams

Between 1996 and 1998, she starred as “Dr. Karen Wilder” in the American medical drama television series “Chicago Hope.” She first appeared in a number of early 2000s guest appearances before making an appearance in Marc Cherry’s American television comedy-drama and mystery series, “Desperate Housewives.” She then made a cameo as “Mrs. Chambers” in the American comedy-drama television series “Greek” between 2007 to 2011; this was her final outing in the entertainment industry.

Carolyn Harrold and B. H. Harrold welcomed Kathryn into the world in Tazewell, Virginia, on August 2, 1950. She spent her early years attending Tazewell High School in Tazewell before enrolling at Mills College in Oakland, California, where she majored in acting.

On February 14, 1994, Harrold wed Lawrence O’Donnell, a former Democratic chief of staff for the Senate Finance Committee. In 2013, they later divorced. Elizabeth Buckley Harrold O’Donnell is their shared daughter.

Nothing is known about Kathryn Harrold’s earnings or pay. Her estimated net worth as of 2022 is $24 million, according to the sources.