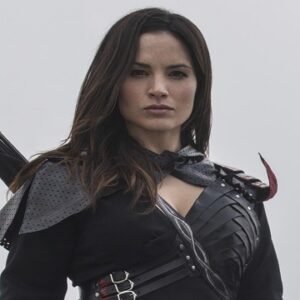 Katrina Law is an American actress, singer, and model who rose to prominence in the Starz television series ‘Spartacus’ as Mira. In the first two seasons of the series, ‘Spartacus: Blood and Sand’ and ‘Spartacus: Vengeance,’ she played the slave girl. Since the second season of The CW television series ‘Arrow,’ she has also been known for playing the DC supervillainess Nyssa al Ghul. ‘Third Watch,’ ‘Reba,’ ‘Chuck,’ ‘Legend of the Seeker,’ ‘CSI: Miami,’ and ‘Ch:os:en’ are some of her other well-known television performances. She’s also been in the web series ‘The Rookie: CTU’ and ‘The Resistance,’ as well as the Hallmark Original television movies ‘Snow Bride’ and ’12 Gifts of Christmas,’ among others. ‘Lucky Numbers,’ ‘Choker,’ ‘A New Tomorrow,’ ‘Death Valley,’ and ‘Checkmate,’ as well as the short film ‘3 Minutes,’ are among her film credits. She is also a founding member of the band Soundboard Fiction, in addition to her acting responsibilities. She was featured on the cover of MOST Magazine’s March 2015 issue, and the accompanying article featured a lengthy interview with her, as well as a breathtaking photoshoot by her favorite photographer Brandin Shaeffer.

Career as an actor of Katrina Law

Katrina Law began her road to fame at the age of ten, when she made her first appearance on television as part of a Chinese film in which she can be seen speaking Mandarin. She represented her native state of New Jersey on national television during her teenage years after being crowned Miss New Jersey Teen USA. She earned a bachelor’s degree in theatre from The Richard Stockton College of New Jersey and went on to study acting in Philadelphia and New York. She had a brief part in the comedy picture ‘Lucky Numbers,’ directed by Nora Ephron and starring John Travolta, in 2000. On the production of the film, she received her SAG membership and scored a cameo part in the NBC criminal thriller series ‘Third Watch’ in 2001.

Katrina Law continues to act in independent films and appear on television in the years after that. Her major break, however, came in 2010 when she worked on the web series ‘The Resistance.’ After the publication of four short teasers on YouTube, Ghost House Pictures and Starz Media took up the low-budget series directed by Adrian Picardi. Law, who played a key role in the series, went on to star in Spartacus: Blood and Sand on Starz. ‘Training Day,’ a 2017 CBS crime thriller in which she plays Detective Rebecca Lee, is her most recent television project.

Career as a musician of Katrina Law

Katrina Law is a great singer who is the lead singer and bass player of the Southern California band Soundboard Fiction, a little-known fact. She began singing when she was six years old and later learned to play the acoustic and bass guitars. She later created the band with some of her pals as a way for the group to express itself creatively. They began by playing gigs at various occasions, but soon decided to turn it into a recording studio band so that they could focus on their creativity without the stress of performing live. So far, the band has released three albums. “Ghost Town” is one of their most popular singles.

Katrina Law was born in Philadelphia, Pennsylvania, on September 30, 1985, and reared in South Jersey. During the Vietnam War, her father fought in the US military, where he met her mother, who worked as a bartender. She learned tolerance and forbearance early in life as the daughter of a Catholic father of German and Italian ancestry and a Buddhist mother of Taiwanese ancestry. Her mother saw how active she was as a child and engaged her in a variety of activities. She took dance lessons, voice lessons, went to the gym, learned karate, and played soccer. During her high school years, she was a member of the varsity team, performed as a cheerleader, and was inducted into The National Honors Society. She began her studies in Marine Biology at Richard Stockton College in New Jersey. She changed her degree to Theatre Arts after landing a part in Summer Stock Theatre’s production of The Chorus Line.
She claims that she learned to balance her personal and professional lives early in her career, and that she is content in her marriage to fellow actor Keith Andreen. After three years of dating, the couple married in 2013. She persuaded her husband to take in a couple of alley cats, which led to her involvement with the Kitt Crusaders organization. She also donates to the Children’s Miracle Network, Variety Children’s Charity, and International Rescue Committee.

Estimated Net Worth of Katrina Law

Katrina Law is an actress from the United States with a net worth of $2 million. Katrina Law was born in the New Jersey town of West New York. As a teenager, she was crowned Miss New Jersey Teen USA. In the year 2000, Law made her film debut in Lucky Numbers. She played Kate Wyman in the TV mini-series The Rookie: CTU in 2007.