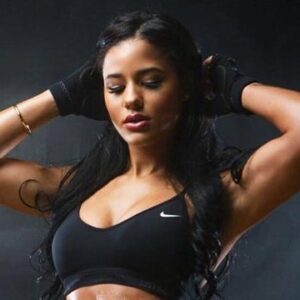 Katya Elise Henry is an American fitness model and online personal trainer who has amassed a large following on social media. Her commitment to a healthy lifestyle and a strict training regimen has resulted in a stunning figure, which is further enhanced by her natural beauty and the flawless tan bestowed by the generous sun of Miami, where she now resides. It has also brought her a lot of attention. Thousands of followers have been motivated by her dedication to work hard and not give up until the desired results are achieved, prompting her to consider personal training as a full-time career. What began as a personal journal on Instagram to keep track of her progress became an instant sensation, attracting the attention of the entire world. She now has many Facebook and Instagram pages, with her primary Instagram account boasting an amazing 3.5 million followers. Because of its authenticity, her attitude has managed to engage her fans: “Be driven. Take part in activities. Have faith in yourself. “Be yourself.” She went on to say in an Instagram post that her goal is to “Inspire you to be better.”

Katya Elise Henry and her family lived all throughout Minnesota and beyond in her early years. She actually graduated from Desert Mountain High School in Scottsdale, Arizona, where she joined the cheerleading squad and began her journey to becoming the fitness celebrity she is today. After strengthening her aerobic routines and flexibility through cheerleading, Katya Henry’s mother’s advice put her on the right track to achieve the body she desired. Her mother counseled her on what exercises to perform, what foods to consume, and which food supplements she should take. “I was blessed with a lovely mother who is also, fortunately, a personal trainer,” Henry says fondly of the experience. Her mother, it is clear, was a huge inspiration for her to pursue her aspirations. Katya originally shared a photo of herself in an enormous t-shirt on Instagram in late January 2013, and it was a stunning image. She used to be a nanny and worked out whenever she could fit it into her busy schedule. Soon after, she began uploading photos of her early progress on social media, and her glutes and well-toned abs gained immediate attention. Henry is a brand ambassador for EHPlabs, a fitness and supplement company, and has been at events such as Joe Weider’s ‘Olympia Weekend’ and the ‘Body Power Expo,’ to mention a few.

Katya Elise Henry is a woman who has made it on her own. She has risen from a low and ordinary beginning to reach enormous achievement through sheer hard work and persistence. She is changing the world in her own unique way by encouraging people to eat healthy foods and live a healthy lifestyle. She’s a fitness entrepreneur who’s had a lot of success. She shifted to online platforms when she realized she couldn’t keep up with the increased demand for physical training from her consumers. It turned out to be a wise move. Her company is prospering, and she has been able to assist thousands of people in making positive changes in their life.

Katya Elise Henry is of multi-ethnic descent, with African American, Native American (Sioux and Potawatomi tribes), Swedish, and Russian lineage in her family. They are the epitome of modern-day progressive America’s great variety. Derick Anthony Henry and Tawnya Lynn Nelson gave birth to her on June 14, 1994 in Minneapolis, Minnesota, United States. For more than two decades, her father served as a professional bodyguard, protecting several well-known figures in the entertainment business. Tanaya and Gabrielle are Katya’s two sisters. Tanaya, who is six years Katya’s senior, is a model, actress, and talented jewelry designer. In early 2016, Katya Henry began dating musician Austin Mahone. The couple went on a road trip to Tampa, Florida in the summer of that year. In February 2017, Mahone confirmed rumors that he and Katya had called it quits, which had been circulating for a few months. Katya has a cross on the back of her neck and the phrase ‘Blessed’ on her right hip, among other tattoos. “Thorns and Stings / And Such Things / Just Make Stronger / Our Angel Wings,” she had tattooed on the left side of her rib cage, according to Emme Woodhull-Bäche.