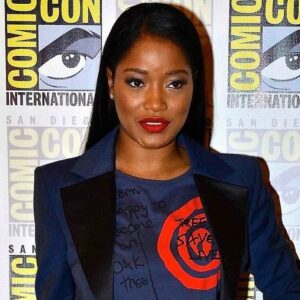 Lauren Keyana Palmer, best known by her stage name ‘Keke,’ is an actress, singer, and television personality from the United States. Since she was a child, she has had a strong desire to sing and perform. She began her acting career at the age of nine in the film ‘Barbershop 2: Back in Business,’ and has since appeared in a number of films and television shows. With her roles in ‘The Wool Cap’ and ‘Akeelah and the Bee,’ she wowed the entertainment world. She starred in the TV series ‘True Jackson, Vice President,’ and is currently a member of the main cast of another show, ‘Scream Queens.’ She is the voice of a key character in the animated film series ‘Ice Age.’ She has published two studio albums, two EPs, and three mixtapes as a vocalist, and she has sung a lot of songs in her performances and films. Keke Palmer is a philanthropist who works with the charity program ‘Cool To Be Smart’ to create awareness about education among young children. She has also collaborated with ‘Saving Our Daughters’ and the YWCA to tackle bullying and abuse around the world.

Sharon and Larry Palmer, both former professional actors, gave birth to Keke Palmer on August 26, 1993, in Harvey, Illinois. Her father is employed for a polyurethane manufacturer, while her mother is a high school teacher who deals with autistic students.

She begged her mother as a child to let her sing solo in the church choir. She stunned everyone when she performed ‘Jesus Loves Me’ at the age of five. She did a solo performance in her kindergarten play at the age of six, and her voice touched the crowd.

She auditioned for the stage performance of ‘The Lion King’ when she was nine years old. Although she was not chosen because she was too young for the part, the casting director commended her abilities.

She persuaded her family to relocate to Los Angeles (LA) so she could pursue more acting chances. After learning that casting directors were keen to cast her, her parents became confident that she has a bright future in show business.

Despite the fact that Keke Palmer has loved singing since she was a child, she made her acting debut in 2004 in the film ‘Barbershop 2: Back in Business.’ She portrayed the niece of Queen Latifah’s character.

She landed a role in an episode of CBS’s ‘Cold Case’ six weeks after moving to LA (2004). She was cast in a national K-Mart commercial and a national search program to act opposite William H. Macy in the film “The Wool Cap” within a year. Her acting in the film was praised by critics.

During this period, she auditioned for the ‘American Idol’ spin-off series ‘American Juniors,’ which was later discontinued, in an attempt to establish herself as a vocalist. She signed with Atlantic Records in 2005 and released her debut single, “All My Girlz,” which was later featured on the soundtrack of “Akeelah and the Bee.”

She starred in the television movie ‘Knights of the South Bronx’ in 2005. She also made guest appearances on three TV shows in the same year, including ‘Second Time Around,’ ‘ER,’ and ‘Law & Order: Special Victims Unit.’
In 2006, she was cast in the award-winning film ‘Akeelah and the Bee’ as the lead part of ‘Akeelah Anderson.’

Her portrayal of a poor bright kid attempting to win the ‘Scripps National Spelling Bee’ wowed critics and audiences alike. She had a supporting role in the film ‘Madea’s Family Reunion’ the same year.

For the first time in November 2006, she played in front of thousands of people in Carson, California for VH1’s ‘Save the Music’ Battle of the High School Marching Bands competition. She later appeared in the music video for Ludacris and Mary J. Blige’s song “Runaway Love.” Her song ‘Tonight’ was featured as the opening song in the end credits of the film ‘Night at the Museum’ the following year.

She landed the starring part of Mary in the Disney Channel Original Movie ‘Jump In!’ in 2007, which featured her songs ‘It’s My Turn Now’ and ‘Jumpin’. She also appeared in the thriller ‘Cleaner,’ opposite Samuel L. Jackson and Eva Mendes, as a supporting character.

‘So Uncool,’ her debut album, was released on September 18, 2007, and featured the hit ‘Footworkin’. Despite favorable reviews, the album did not fare well on the Billboard charts.
She landed the lead role in the Nickelodeon sitcom ‘True Jackson, VP’ in 2008. Palmer also performed the show’s theme tune. She starred in the films ‘The Longshots’ and ‘Shrink’ the same year.

In 2010, she switched from Atlantic Records to Interscope Records. The next year, she released ‘Awaken,’ her debut mixtape, which included the hit ‘The One You Call.’ In 2012, she released her self-titled second mixtape.

‘Scream Queens,’ a Fox horror series, was one of her most recent major roles. Since 2015, she has played Zayday Williams, the main character, for two seasons.

Early in her career, Keke Palmer was recognized for her portrayal of the major character in ‘Akeelah and the Bee.’ Some critics compared the film to ‘Rocky,’ while others claimed Palmer stole the film from Angela Bassett and Laurence Fishburne.

One of her most well-known works is the Nickelodeon sitcom ‘True Jackson, VP.’ With a $20,000 per episode compensation during the series, she became the fourth highest paid child actor on television.

In 2004, Keke Palmer was nominated for a Screen Actors Guild Award for her work in the film “The Wool Cap.” She was the youngest actor to gain a nomination in a ‘Lead Actor’ category when she was 10 years old, and she still retains the record.

From 2010 until 2013, Keke Palmer dated Rodney King for three years. She’d had a crush on him since she first met him on the set of ‘True Jackson, Vice President’ in 2008.
Since October 2013, she has been dating actor Quincy Brown. She is, however, now single, according to reports.

Keke Palmer has a net worth of $7.5 million as an actress, singer, musician, dancer, and fashion designer in the United States.

It took Keke Palmer five tries to persuade the director during the audition for ‘Akeelah and the Bee.’ She had to train with a professional quarterback for 7 weeks for her role in ‘The Longshots.’