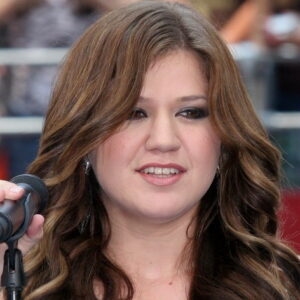 Kelly Clarkson is an American singer and songwriter who became the country’s sweetheart after winning the first season of ‘American Idol.’ Her victory not only propelled her to fame, but also landed her a multi-album deal with RCA Records, 19 Recordings, and S Records. Since then, she has published a number of studio albums, three of which have charted at the top of the ‘US Billboard 200,’ while the others have just missed out on the top place. She is one of the most well-known musicians to emerge from the ‘American Idol’ franchise. As her career progressed, she experimented with many themes and musical styles, co-writing many of her songs in response to her personal feelings. For her uniqueness and singing talent, she received critical acclaim and a number of important accolades. She is well known for winning the ‘Grammy Award’ three times. She has featured in films and television series in addition to her singing career. She has also worked with a number of philanthropic organizations and wrote the children’s book “River Rose and the Magical Lullaby.”

Kelly Brianne Clarkson was born in Fort Worth, Texas, to Jeanne Ann and Stephen Michael Clarkson on April 24, 1982. Her father was an engineer and her mother was a first-grade English teacher. When she was six years old, her father divorced her mother.
Jason, her older brother, and Alyssa, her older sister, are her siblings. Her father’s second marriage gave her two step-brothers. Her brother moved in with her father, and her sister was raised by an aunt, thus she did not grow up with her siblings. After they grew up, they became closer.
A teacher who heard her singing in the corridor persuaded her to join the chorus while she was in seventh grade at ‘Pauline Hughes Middle School.’ She went on to ‘Burleson High School,’ where she participated in a talent show and acted in various musicals.

Kelly Clarkson was resolved to pursue her musical goals after graduating from high school in 2000. She then used the money she saved by doing a variety of odd jobs to record a demo. She was so sure in her ability to make it big in the music business that she turned down two recording contracts from ‘Jive Records’ and ‘Interscope Records’ at the time.
She traveled to Los Angeles in 2001 in search of work, and ended up as an extra in television shows like ‘Sabrina, the Teenage Witch’ and ‘Dharma & Greg.’ She eventually worked as a vocalist with songwriter Gerry Goffin, recording five demo tracks in the hopes of landing a record deal.
Most US recording studios turned her down, claiming that her voice sounded “too black.” She eventually returned to Texas, distraught, after a fire disaster, and began working as a telemarketer and waitress.

Kelly Clarkson discovered about the impending talent show ‘American Idol: The Search for a Superstar’ through her friends in May 2002, and she was persuaded to audition. On September 4, 2002, she received a ‘golden ticket,’ a pass to the Hollywood rounds, and was proclaimed the champion of the show’s first season. Her appearance on the show was so popular that she was offered a million-dollar record deal by RCA Records.
With the double-A-side songs ‘Before Your Love’ and ‘A Moment Like This,’ she began her music career on September 17, 2002. Both singles surged 52 spots to the top of the ‘Billboard Hot 100’ chart, making the former the best-selling single of 2002.
Her debut album, ‘Thankful,’ was released on April 15, 2003, and received favorable reviews from critics. The album opened at number one on the ‘US Billboard 200,’ and its lead single, ‘Miss Independent,’ charted in the top ten in the United States.
She wanted to break away from her ‘American Idol’ image and adopt a rock music style with her second album, ‘Breakaway,’ which was released on November 30, 2004. The record outsold her debut album in terms of sales and garnered her two ‘Grammy Awards.’
She released her third studio album, ‘My December,’ on June 22, 2007, in which she dabbled with darker topics and a stronger rock sound once more. It did, however, lead to a feud with her producer and music magnate, Clive Davis, who wanted her to create songs with a broader audience. Despite excellent reviews, the album’s sales were hampered by a lack of advertising.
Clarkson began co-writing her songs on her third album and continued to do so on her fourth, ‘All I Ever Wanted,’ released on March 10, 2009. She criticized harsher themes on this album and cooperated with a number of well-known singers, helping it to debut at number one on the Billboard 200.

She chose country music for her fifth studio album, ‘Stronger,’ after the success of her country duet ‘Don’t You Wanna Stay,’ with Jason Aldean in 2010. The album was a critical and financial triumph, earning her another ‘Grammy Award.’ It was released on October 21, 2011, and was a critical and commercial success.
In January 2013, she gained critical acclaim for her live rendition of ‘My Country, ‘Tis of Thee’ at President Barack Obama’s second inauguration. ‘Wrapped in Red,’ her next album, was a Christmas record that came out on October 25, 2013, and had five original songs that she co-wrote.
‘Piece by Piece,’ her seventh studio album, portrays a single story of heartbreak across its songs. It was her third album to debut at number one on the Billboard 200 list when it was released on February 27, 2015.
In 2017, she released the tracks ‘Love So Soft’ and ‘Move You.’
She appeared alongside Oprah Winfrey, Steven Yeun, and Tyler Perry in the animated film ‘The Star,’ which is based on the birth of Jesus.
She has also served as a coach on NBC’s ‘The Voice.’
On March 27, 2019, Kelly released the lead single from the ‘Uglydolls: Original Motion Picture Soundtrack,’ titled ‘Broken and Beautiful.’

Kelly Clarkson smashed The Beatles’ 38-year-old record for the largest rise to number one on the Billboard Hot 100 list with her debut single. After her single ‘My Life Would Suck Without You’ hit number one from 97th place, she shattered Britney Spears’ record for the largest single-week jump to number one.
She has been nominated 13 times for the ‘Grammy Award,’ winning three times for her albums ‘Breakaway’ and ‘Stronger.’ Four ‘American Music Awards,’ three ‘MTV Video Music Awards,’ and six ‘Teen Choice Awards’ have also been bestowed to her.

On October 20, 2013, at Blackberry Farm in Walland, Tennessee, Kelly Clarkson married Brandon Blackstock, the son of her manager Narvel Blackstock. In June 2014, the couple received a girl, and in April 2016, they welcomed a son.

Kelly Clarkson has a net worth of $35 million.

Kelly Clarkson has written a number of songs on her poor relationship with her estranged father. While the lyrics were initially dismal, she was eventually able to communicate a hopeful message with the song “Piece by Piece.”