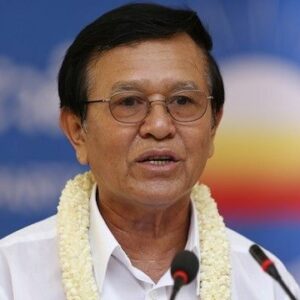 Kem Sokha is a well-known Cambodian human rights activist. He is currently a Member of Parliament and Vice President of Cambodia’s National Assembly (lower house of the Parliament of Cambodia). He had a rough upbringing because he was born into a poor family. He earned his law degree from the Royal University of Law and Economics in Phnom Penh, Cambodia, and went on to work for the Cambodian government. Cambodia was occupied by the Vietnamese at the time. He secretly supported the Freedom Fighters, a Cambodian group resisting the Vietnamese occupation, since he was dissatisfied with the status of the government. As a result, he was investigated by the government and was compelled to resign. In order to avoid arrest, he took a scholarship to study overseas. After earning his Master of Science in Biochemistry from the Institute of Chemical Technology in Prague, Czech Republic, he returned to Cambodia five years later. He eventually entered politics and worked for a number of different parties and organizations before founding the Human Rights Party in 2007. He worked tirelessly for human rights problems and conducted public forums across Cambodia as part of this endeavor. The Cambodia National Rescue Party was formed in 2012 when the Human Rights Party and the Sam Rainsy Party joined to establish the Cambodia National Rescue Party. He is well-known for his zealous defense of human rights.

Kem Sokha was born into a poor family in Tram Kak, Takeo, Cambodia, on June 27, 1953. He came to Phnom Penh in 1973 after finishing high school to study law at the Royal University of Law and Economics. He used to dwell in a pagoda because he didn’t have enough money. Cambodia was taken over by the Khmer Rouge administration in 1975. Kem Sokha, like millions of others, was a victim of the Khmer Rouge government, losing his father and sibling.

When the Khmer Rouge regime fell apart in 1979 and Cambodia was occupied by the Vietnamese, Kem Sokha became the District Deputy Chief in Phnom Penh. He began secretly aiding the Freedom Fighters, a Cambodian group resisting the Vietnamese rule, since he was dissatisfied with the way his nation was being run.

When the authorities became suspicious of his activities, he resigned from his position and joined a non-political humanitarian organization. His well-wisher later recommended him to leave the country under the guise of studying abroad on a scholarship to avoid possible arrest.

He enrolled at the Institute of Chemical Technology in Prague, Czech Republic, in 1981 and received a Master of Science degree in biochemistry in 1986. He returned to the Ministry of Industry in 1986, but due to his earlier affiliations with the Freedom Fighters, he was not granted any key positions.

He was transported to a non-operational brewing factory near the Thai border, where he began a pepper plantation with the help of several locals. He spent the next three years working on his ten-hectare plantation. He became the chairman of the Human Rights Vigilance of Cambodia, a first-of-its-kind organization in Cambodia, in 1991. As a result of this, he was able to address the difficulties and concerns of victims of human rights violations and provide them with the necessary assistance.

In 1992, he left the organization and became the general secretary of the Buddhist Liberal Democratic Party (BLDP), which is led by Son Sann. In the national elections, he was elected as a Member of Parliament (MP) from Kandal.

When the BLDP split in two in 1995, he and Son Sann’s supporters founded a new party, Son Sann Party, and he became its general secretary. In 1997, he escaped to Thailand with other opponents of the military coup led by the Cambodian People Party (CPP) to depose Norodom Rannaridh, the country’s first prime minister.

He founded the Union of Cambodian Democrats in Thailand, with the backing of fellow Cambodian refugees, and served as its first Deputy General Secretary. In 1998, Hun Sen, the country’s second Prime Minister, allowed expatriates to return and run in general elections, where he was nominated by Son Sann due to his popularity. When his party lost, he and other opposition leaders organized a major protest against the rigged election results; nevertheless, the government used armed troops to suppress the demonstrations.

He was elected to the Senate and named Chairman of the Commission on Human Rights and Complaints Reception.
When his suggestions were rejected by the leadership of the FUNCINPEC Party, which had become compromised, he resigned from the party and the Senate in 2001.

He founded the Cambodian Center for Human Rights (CCHR) in 2002, with support from USAID, and served as its first President. CCHR’s mission was to educate Cambodians about human rights and hold public forums for open discourse. In 2007, he founded the Human Rights Party and served as its President until 2012, when it was combined with the Sam Rainsy Party to form the Cambodia National Rescue Party (CNRP).

In 2013, he ran for the National Assembly, and his catchphrase “Do Min Do” (Change or No Change) became the party’s hymn for election campaigns. He was elected as the First Vice President of the National Assembly of Cambodia in 2014 after becoming a Member of Parliament from Kampong Cham.

Kem Sokha has been a passionate supporter for human rights and has done outstanding work in developing human rights awareness among ordinary persons.

Kem Sokha is one of the wealthiest politicians and one of the most popular. Kem Sokha’s net worth is estimated to be $1.5 million, according to Wikipedia, Forbes, and Business Insider.