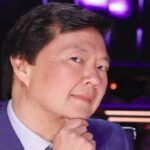 Ken Jeong is a Korean-American actor who is best known for portraying Leslie Chow in the ‘Hangover’ film series. Aside from that, he is most known for his role as Ben Chang on the popular comedy ‘Community.’ Ken was born in Detroit and raised in North Carolina, but his family was originally from South Korea. He was a stellar student who received numerous awards during his time in school. He began his medical practice in New Orleans, where he worked as a doctor while also doing stand-up comedy. In 1997, he made his screen debut in the television series ‘The Big Easy,’ playing a doctor. Ken worked as a physician for the first ten years of his acting career. He began pursuing acting seriously after his first significant cinematic break in 2007 with the film ‘Knocked Up.’ ‘The Hangover,’ released in 2009, catapulted him to worldwide popularity for the first time, and he hasn’t looked back since. He has acted in films such as ‘Pineapple Express’ and ‘Zookeeper’ as an actor. His roles on television have also aided in his rise to stardom throughout the years.

Ken Jeong was born Kendrick Kang-joh Jeong to a family of South Korean immigrants in Detroit, Michigan on July 13, 1969. D.K. Jeong, his father, was a college professor. Ken’s family relocated to North Carolina shortly after his birth, where his father accepted a position as a university professor. Ken grew raised in a home with two elder twin sisters.
The family put a lot of effort into their children’s academics. As a result, Ken developed into a top student. Later interviews revealed that his father was a serious man who inherited his father’s sense of comedy. Ken went to Walter Hines Page High School in North Carolina, where he was involved in a variety of extracurricular activities.
Ken was a prominent member of the student government and played violin in the school symphony in addition to engaging in quizzes. Ken graduated from high school with honors at the age of sixteen. He was also named Greensborough Youth of the Month.
Ken desired to be a doctor, so he graduated from Duke University with a bachelor’s degree in 1990. He then went on to the Chapel Hill School of Medicine in North Carolina, where he received his M.D. He was all set to pursue a career in medicine after that, but his interests were elsewhere.
Ken had a strong desire to perform stand-up comedy and improv since he was a teenager. His parents, on the other hand, wanted him to have a secure career, so he chose to become a physician instead of pursuing comedy full-time. However, once he began practicing medicine professionally, he had more time to pursue his long-held passions, and he began doing stand-up comedy on the side.
Ken has frequently performed in open mic stand-up comedy gigs even during his undergraduate years. He never stopped being a comic, which prompted him to continue honing his craft. Ken began his career as an internal medical resident at the Ochsner Medical Center in New Orleans. He developed his stand-up comedy routines side by side. He subsequently relocated to California, where he obtained a license to practice medicine. But his true ambition was to get into the local comedy scene.
Ken competed in the ‘Big Easy Laff-off’ in 1995, and the judges encouraged him to relocate to Los Angeles after noticing his abilities. Ken became a regular at the Improv and the Laugh Factory comedy clubs after this win, feeling confident in his abilities. He began working at the Kaiser Permanente hospital after moving to Los Angeles to pursue a professional career in comedy.
In 1997, he made his acting debut as a guest star on the crime thriller series ‘The Big Easy.’ Many other series roles followed, including ‘The Downer Channel,’ ‘Girls Behaving Badly,’ ‘Significant Others,’ and ‘Crossing Jordan.’ His roles in the successful sitcom “Two and a Half Men” and the HBO series “Entourage” helped him gain even more fame.
In 2007, he made his feature film debut in Jude Apatow’s film ‘Knocked Up.’ He played Dr. Kuni in the film, which went on to become his breakthrough role in Hollywood. Ken managed to leave a long-lasting impression despite his minor role, thanks to his superb comic timing and eccentricities.
This was the performance that convinced him to abandon his job as a doctor and pursue acting full-time. He went on to star in films including ‘Step Brothers,’ ‘Pineapple Express,’ and ‘Role Models,’ thanks to the commercial and critical success of ‘Knocked Up.’
In 2009, he landed the part that would forever alter his life and career. He was cast as a comedic bad guy in the film ‘The Hangover,’ which stars Bradley Cooper as the main. Ken became a household name when his character, a gay Chinese criminal named Leslie Chow, became legendary. He went on to reprise his role in the next two ‘The Hangover’ movies. Despite the fact that neither of the subsequent films were as successful as the first, Ken had already established himself as a major celebrity.
In the same year, he landed another career-defining role, this time in television. In the iconic comedy series ‘Community,’ he first appeared as Ben Chang. He was nominated for multiple awards and received honors for his role, which he reprised for 92 episodes.
He appeared in two blockbuster films in 2011, ‘Transformers: Dark of the Moon’ and ‘Zookeeper.’ Due to his humorous timing, he was picked to host the Billboard Music Awards the following year.
Ken’s acting career grew when he appeared in minor roles on shows including ‘Bob’s Burgers,’ ‘Sullivan & Son,’ ‘Maron,’ ‘Turbo Fast,’ and ‘Hot in Cleveland.’ He also did voice work in movies including “Despicable Me 2,” “Turbo,” and “Birds of Paradise.” In 2015, Ken starred in the sitcom ‘Dr. Ken,’ in which he played the major character. Ken wrote, co-produced, and created the series himself. Ken appears in the series as a fictionalized version of himself, which was met with mixed reviews from critics and the general public. After two seasons, the show was canceled.
Ken and actor Jamie Foxx have acquired a considerable amount of affection for one another. There is an agreement between the two that they will both star in films written or produced by the other. When Foxx committed to star as the leading male in Ken’s film ‘After Prom,’ he kept his word. Ken will star in the comedic series ‘All-Star Weekend,’ which Jamie will produce.

Ken won the Best WTF Moment award at the MTV Movie Awards for his role in the film “The Hangover.” At the same ceremony, he was also nominated for Best Villain. In addition, he received a Teen Choice Award nomination for his role as a villain in the same film.
He was nominated for a Teen Choice Award for Best Breakout Star for his main role on ‘Community.’ In addition, for the series ‘Burning Love,’ he won a Streamy Award for Best Guest Appearance.

Ken Jeong has been married to a Vietnamese American physician named Tang Ho since the early 2000s. She has overcome breast cancer. In 2007, the couple welcomed twin girls into the world.
Todd Philips, the filmmaker of ‘The Hangover,’ is Ken’s brother, and he never hesitates to credit him for all of his success in Hollywood.