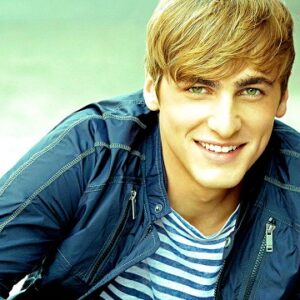 Kendall Schmidt is an actor, rock singer, composer, and music producer from the United States. He followed in the footsteps of his two older brothers, both of whom are actors. He’s been working on commercials, films, and television series since he was five years old. He has appeared in television shows such as ‘Gilmore Girls,’ ‘ER,’ ‘Frasier,’ ‘CSI: Miami,’ and ‘Romeo!’ He is most known for playing the lead in Nickelodeon’s musical drama ‘Big Time Rush.’ He can sing and play guitar, bass, piano, and drums, among other instruments. He was a part of ‘Big Time Rush,’ a boy band that disbanded when the show finished. ‘BTR,’ ‘Elevate,’ and ’24/Seven’ are their three studio albums. Along with his friend Dustin Belt, he is currently a member of the band ‘Heffron Drive.’ ‘Happy Mistakes’ and ‘Slow Motion’ are their two studio albums. They recently released their latest track, ‘Living Room,’ as well as a music video to go along with it. He previously participated in the music video ‘Conmigo [Rest of Your Life]’ for Mexican multilingual pop vocalist Sofia Reyes. He wrote the words for the songs ‘You’re Not Alone’ and ‘Cover Girl’ as a songwriter. He also runs TOLBooth Records, his own record label.

Kendall Francis Schmidt was born in Wichita, Kansas, on November 2, 1990, to Kent and Kathy Schmidt. Kenneth and Kevin, two of his three kids, are also actors.

He was inspired to become an actor as a child after watching his older brothers perform. While he began acting for the sheer enjoyment of it, he soon got enamored with it.

He and his mother used to go back and forth between Kansas and Los Angeles to accommodate his brothers’ performing schedules when he was younger. The family moved to California permanently when he was ten years old.

Kendall Schmidt began his acting career when he was five years old, when he appeared in a Chex cereal ad. Despite the fact that he and his older brothers auditioned separately, they were cast together.

He was cast as one of three body duplicates for Haley Joel Osment in Steven Spielberg’s film ‘A.I. Artificial Intelligence’ (2001) when he was nine years old. Director Steven Spielberg and the cast presented him with a Star Wars-themed birthday cake on his tenth birthday.

He began to appear on television after the family moved to Los Angeles. ‘General Hospital,’ ‘Titus,’ ‘Raising Dad,’ ‘Gilmore Girls,’ ‘CSI: Miami,’ and ‘Romeo!’ were among his first recurring roles.

He participated in a variety of TV shows during this time, including ‘ER,’ ‘MADtv,’ ‘Frasier,’ ‘Phil of the Future,’ ‘Without a Trace,’ and ‘Ghost Whisperer.’ He also participated in the film ‘According to Spencer’ and returned with Steven Spielberg for a brief role in the 2002 film ‘Minority Report.’

In 2009, he got his big break as one of the four leads in Nickelodeon’s musical sitcom ‘Big Time Rush.’ Kendall Knight, the leader and vocalist of the eponymous band, was played by him. Along with James Maslow, Carlos Pena Jr., and Logan Henderson, he was cast in the film.

He and his ‘Big Time Rush’ bandmates also starred in the full-length film ‘Big Time Movie’ in 2012. The TV show aired for four seasons before being cancelled in 2013.

Kendall Schmidt, who is also a vocalist, and his friend Dustin Belt created a boy band in 2008. The band was called after the street where they both resided and met for the first time, Heffron Drive. After both of them joined the Nickelodeon show ‘Big Time Rush,’ the band went on hiatus in 2009. Belt joined the band as a guitarist, while Schmidt was one of the lead vocalists.

For his brother Kevin Schmidt’s web sitcom ‘Poor Paul,’ he sang the title song, ‘All That Really Matters.’ Kendall Schmidt and Sean Michael Beyer wrote and performed the song in June 2009.

In 2009, he joined the boy band ‘Big Time Rush’ (BTR), which was formed around the same time as Nickelodeon’s sitcom ‘Big Time Rush.’ Kendall, James, Carlos, and Logan, the show’s four main characters, were all vocalists in the band.

Schmidt and Belt resurrected their band, ‘Heffron Drive,’ after the band ‘Big Time Rush’ disintegrated, and embarked on a winter tour across the United States in late 2013. ‘Happy Mistakes’ (2014) and ‘Slow Motion’ (2015) are their two studio albums to date (2017).

Kendall Schmidt was featured in Nickelodeon’s ‘Big Time Rush.’ When it first aired, it was an instant hit, breaking the record for the highest-rated live-action series debut in Nickelodeon history with 6.8 million people.

The boy band ‘Big Time Rush’ has had commercial success with all three of their studio albums. Their debut album, ‘BTR,’ debuted at number three on the Billboard 200 chart and went on to sell over half a million copies. Despite the fact that their second album, ‘Elevate,’ only reached number 12 on the same chart, it sold more overall copies.

Kendall Schmidt was nominated for his first award in 2002. He was nominated for a ‘Young Artist Award’ in the category of ‘Best Performance in a TV Series (Comedy or Drama) – Young Actor Age Ten or Under’ for his work in ‘Gilmore Girls.’

He was nominated for two ‘Kids’ Choice Awards, Australia’ in 2010 and 2011 for his role in the show ‘Big Time Rush.’ He was also nominated for an Astra Award in 2011. His co-stars James Maslow, Carlos Pena Jr., and Logan Henderson all received honors.

Micaela Von Turkovich and Kendall Schmidt are presently dating. According to reports, the two began dating in mid-2015. She had an appearance in the official music video for Heffron Drive’s song “Living Room.”

He was the first member of BTR to have tattoos, and he now has eight on his body. A Scorpio zodiac sign, a heart on his sleeve, a peace sign surrounded by the elements, a sugar skull, and a tattoo of his dog, Sissy, are just a few of his tattoos.

Kendall Schmidt was the last of the main characters in ‘Big Time Rush’ to be cast. He was originally passed up for the position during his first audition, and Curt Hansen, who later performed a cameo role, was cast in his place.

Curt’s performance in the pilot, however, did not meet the producers’ expectations, prompting them to request Schmidt for another audition after his friend Logan Henderson recommended him.

Kendall Schmidt has an estimated net worth of $8 million as an actor and songwriter in the United States.