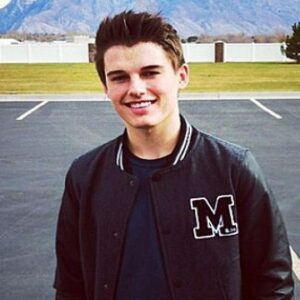 Kenny James Holland is an accomplished singer, songwriter, pop-rock recording artist, musician, and actor from the United States. Kenny Holland’s YouTube channel ‘Kenny Holland’ has gained a lot of attention for his passionate renditions of covers and melodic singing voice. He has live-covers of hit songs like ‘Go The Distance (from Hercules)’, ‘Viva La Vida (Coldplay Cover)’, ‘Scars to Your Beautiful (Alessia Cara)’, ‘Story of My Life by One Direction (Loop Pedal A Capella)’, and others on his YouTube channel. In 2016, Kenny acted in a motion picture adaptation of ‘Saturday’s Warriors,’ in which he played Jimmy Flinders, a musical prodigy and rebellious adolescent. The plot of this film centres around twins Jimmy and Pam Flinders, who make pledges to each other as spirits before arriving as mortals on Earth. Later, while pursuing his musical career, Jimmy battles with his faith, identity, and relationship with his family. Kenny’s first album, ‘Heart & Keys,’ was published in 2012, and it helped him establish reputation as a performer.

In his teens, Kenny Holland began performing as a musician at local high school events in Michigan. In 2012, he released his first solo album, ‘Hearts and Keys,’ which featured a variety of rock-infused teen-pop songs. The tunes ‘So What,’ ‘Backseat,’ and ‘One Day at a Time,’ all from his ‘Hearts and Keys’ album, earned a lot of praise from his followers who called themselves ‘Holland Nation.’ In 2014, another album titled ‘There’s a Way’ was released, as well as an EP (Extended Play) titled ‘Whatever It Takes.’

Kenny also created a name for himself on Vine, where he posted 6-second videos and amassed over 1900K followers.

When Kenny Holland and Wesley Stromberg went on a ski trip with other Viners like Nash Grier in 2015, they became fast friends. In 2015, the two buddies decided to collaborate on music and founded the band ‘The Balcony.’ Many tracks, such as ‘Fire,’ ‘Blue,’ and ‘Pack Your Bags,’ were co-written by Kenny Holland and Wesley Stromberg (who is also a member of Emblem3, a reggae Pop band).

Kenny published an EP titled ‘Begin Again’ in 2016 with lyrical songs such as ‘Matters to You,’ ‘Souvenirs,’ and ‘Try,’ as well as an album titled ‘Hollan Days,’ in which he sung versions of songs such as ‘Hotel California,’ ‘Viva La Vida,’ and ‘Ain’t No Sunshine.’

On April 5, 2016, Kenny Holland released his EP B.O.A.T.S (Based On A True Story) and its single ‘So Long.’ Throughout his December 2015 tour, Kenny was filmed, followed, and videoed in order to create a B.O.A.T.S documentary about him. This documentary gives his followers an intimate glimpse at his daily life, behind-the-scenes turmoil, how some songs were fabricated, and what it’s like to be on tour with him. Kenny wrote and sang all of the songs on this EP, including ‘Mummy,’ ‘Lifeline,’ ‘Demons,’ and ‘Dreamville.’

Kenny also used his YouTube account to broadcast his musical videos, which helped him grow his social media following. He shared official music videos for songs he wrote and sang, such as ‘Lifeline,’ ‘This Dance,’ ‘Souvenirs,’ ‘Lifeline,’ ‘Dreamville,’ and others. Kenny has also made official lyric videos for songs like ‘One Day At A Time’ and ‘Matter To You (featuring Andrea Russet)’ available on his YouTube channel.

He shared a number of mashup videos on YouTube, including ‘Mashup of 3 tracks by Kenny ft Cody Johns and Rajiv Dahl (The Chainsmokers, Rihanna, and Calvin Harris)’ and ‘Sorry Mashup of Justin Bieber and One Republic ft Cody Johns and Gabriel Conte.’ He’s posted cover videos of himself singing Coldplay, Eagles, Parachute, and Kelly Clarkson songs. He and his sisters have also uploaded some videos of them singing together. Kenny’s YouTube channel has more than 244K subscribers.

Kenny McCormick was born on May 1, 1995, in Phoenix, Arizona, to Kelly and Ken McCormick, but grew up in Michigan. Later, he relocated to Los Angeles to seek a career as a writer, singer, and record producer. He has six sisters, one of whom, Capri, is his favorite. Andrea Russet, a YouTube personality, is his girlfriend.

Kenny Holland, a prominent Pop Singer, has a net worth of $71 million, according to Wikipedia, Forbes, IMDb, and other online sites. He is 24 years old. He made a living as a professional pop singer. He was born and raised in Arizona.